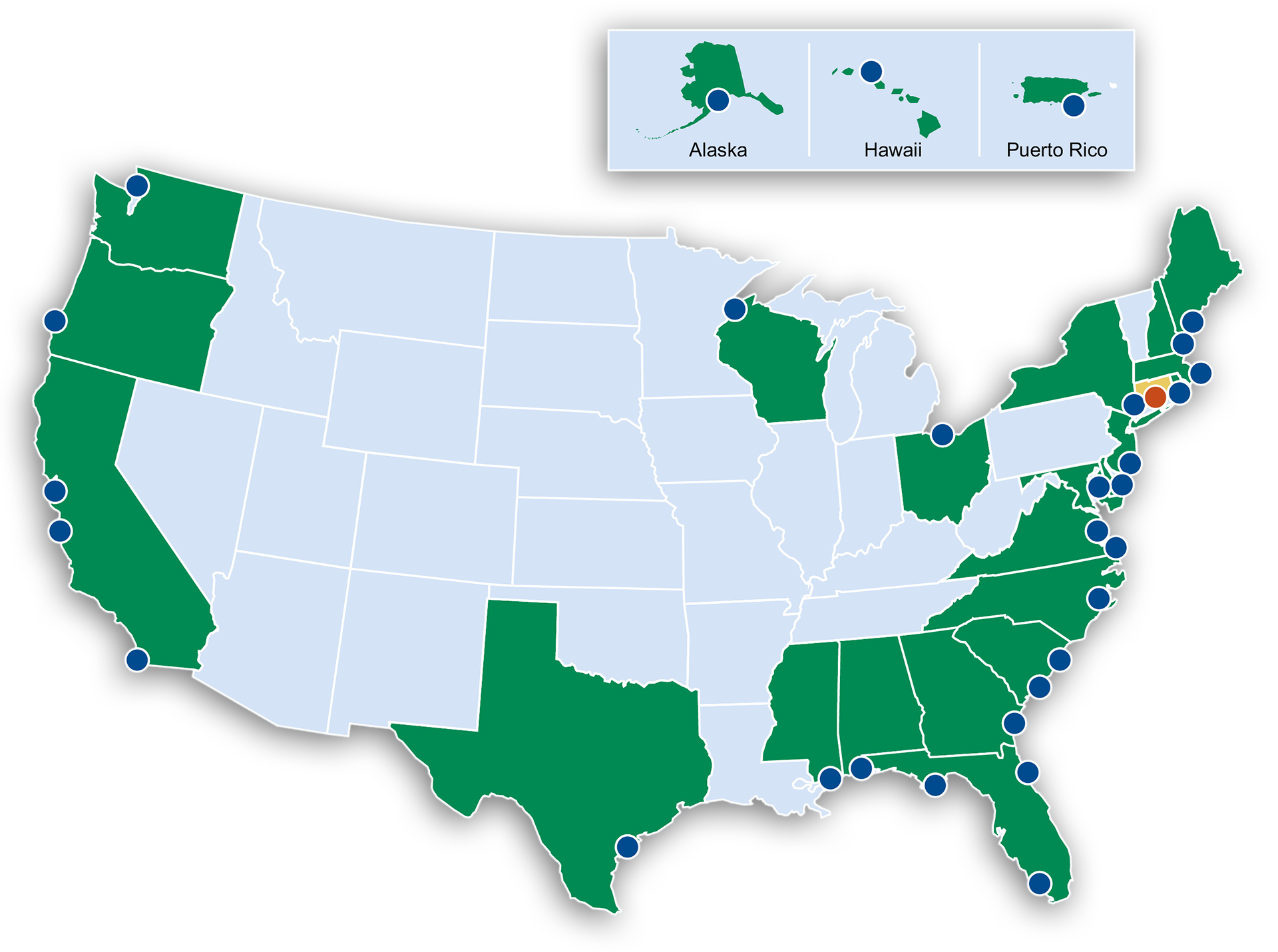 We couldn’t agree more with the 70+ members of Congress who say: “By protecting estuaries and coasts, the NERRS reduces community vulnerability to hazards, supports the nation’s coastal economy, and provides robust, credible scientific research.”  Thanks for your support!

On April 1 (no fooling), more than 70 members of Congress from around the coastal U.S. expressed their support for the NERRS by signing a “Dear Colleague” letter that requested funding for programs on the “wet” side of NOAA.

A special NERRA thank you these representatives and the Honorable James R. Langevin (Rhode Island) and Don Young (Alaska) for their leadership in crafting and submitting this letter to the U.S. House Subcommittee on Commerce, Justice, Science, and Related Agencies.

They know that the good work of the Narragansset and Kachemak Bay Reserves is carried out by all of the Reserves in our national system. As the letter says, “These coastal Reserves are essential to maintaining balanced habitats and protecting our way of life in these parts of the country.”

Have a few minutes? Scan the letter (it feels great to see all those names, we promise!), and if your representative is a signee, then let him or her know how much you appreciate the support with an email or shout out on social media. Don’t forget to tag us @nerra! 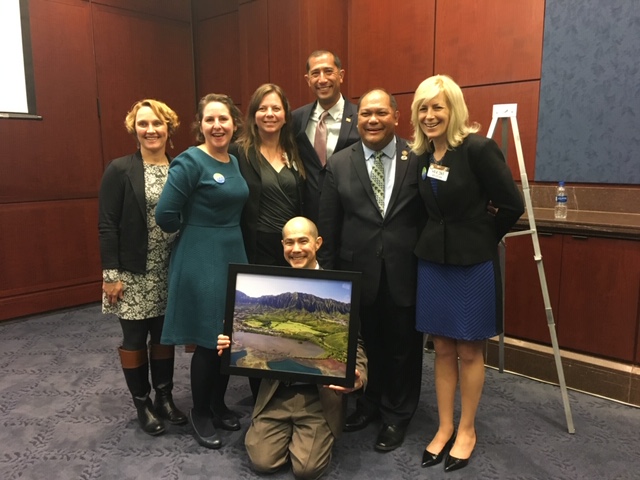 NERRA joined our partners at NOAA’s Office for Coastal Management to offer a special thanks to Senator Brian Schatz (HI), James Chang, staff to Senator Schatz, Kolo Rathburn from the Department of Commerce, and Leo Asuncion, State of Hawaii. Their collective work was key to establishing the He’eia Reserve in Hawaii—the newest Reserve in our system and already a respected convener of projects and programs that integrate the latest science with ancestral wisdom.

“Our national program is stronger today because of the He’eia Reserve designation, and we have heroes like you to thank for it. Welcome to the family!” said NERRA President Lisa Auermuller speaking to the honorees.

Both Mr. Chang and  Mr. Rathburn understood the national benefit of the NERRS. They  were committed to furthering the successes of the program by not only calling for a Blue Ribbon Panel study of the system, but by also working to secure additional funding for program and its newly designated 29th Reserve. 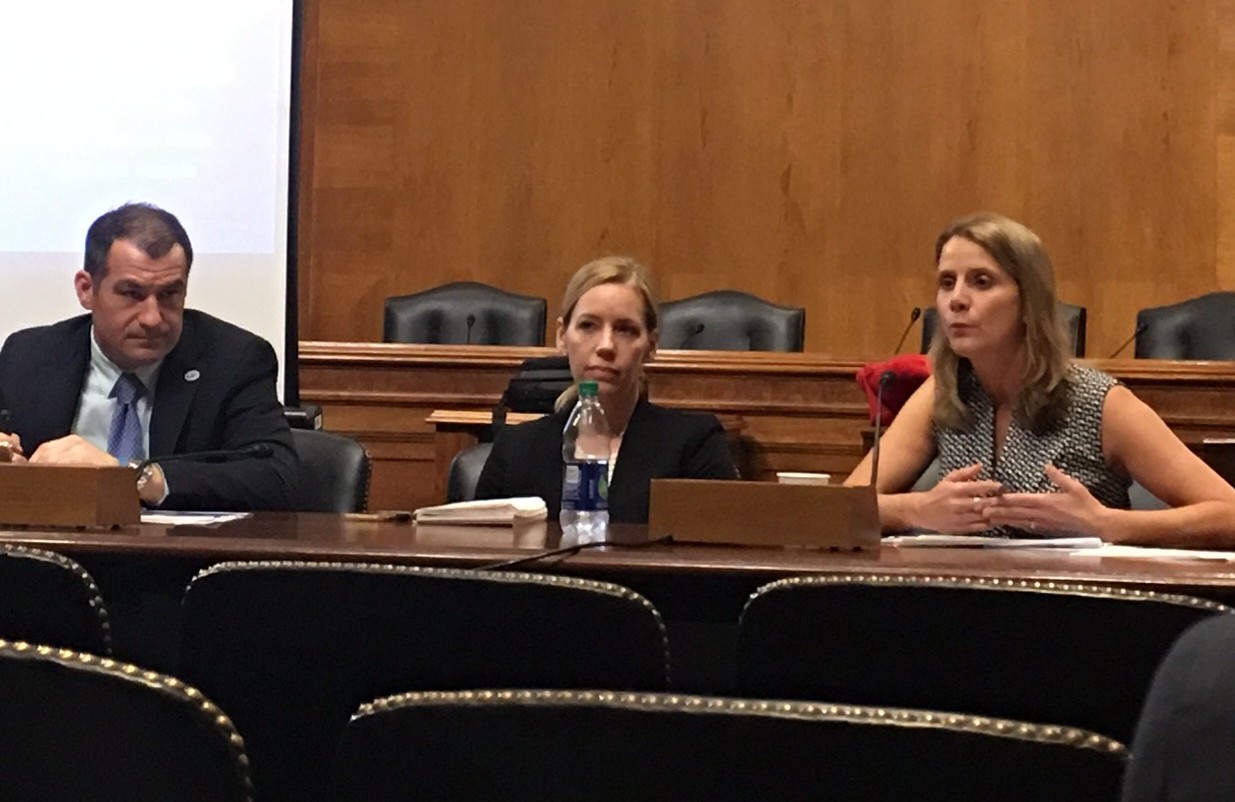 From the small state of New Hampshire came a big story about the power of collaboration to promote resilience during a special Coast Day session.

“New Hampshire is a small state with a small coast. We have no income tax, not much state funding, and local decision making is very important,” observed Cory Riley, manager of the state’s Great Bay Reserve.

“Coastal programs have to work together and share our resources to improve the health of coastal communities. It takes planning, hard work, and personal and professional trust to do this well.”

Riley was joined by partners Rachel Rouillard, director of the Piscataqua Region Estuaries Partnership (PREP), and Steve Couture, administrator of the New Hampshire Coastal Program. Together, they described how their programs work together to help the state’s coastal communities be more resilient—a partnership story that unfolds in different ways in states with a Reserve nationwide.

“A key to resilience is making sure our water is clean,” said Couture. “As a regulatory agency, we need to understand the trends and feasible management solutions.” This mandate is supported by PREP’s efforts to integrate water quality data and science at a watershed scale and the Great Bay Reserve’s long-term monitoring program and work on community outreach.

New Hampshire’s culture of local decision making strongly impacts its ability to address flooding and sea level rise. All three programs have evolved to support individual community needs in strategic ways. These include regional vulnerability assessments that inform community priorities, a state-wide commission that improves state processes and reviews regulations, and a community of practice around climate adaptation and municipal outreach.

“It all adds up to building a community of integrated stewardship, among our programs and with citizens,”  says Rouillard. Sometimes that means letting go of our individual brands for the greater good,” she added, referencing Every Drop—a new campaign that encourages a lifestyle that protects the region’s water quality and is supported by many programs. 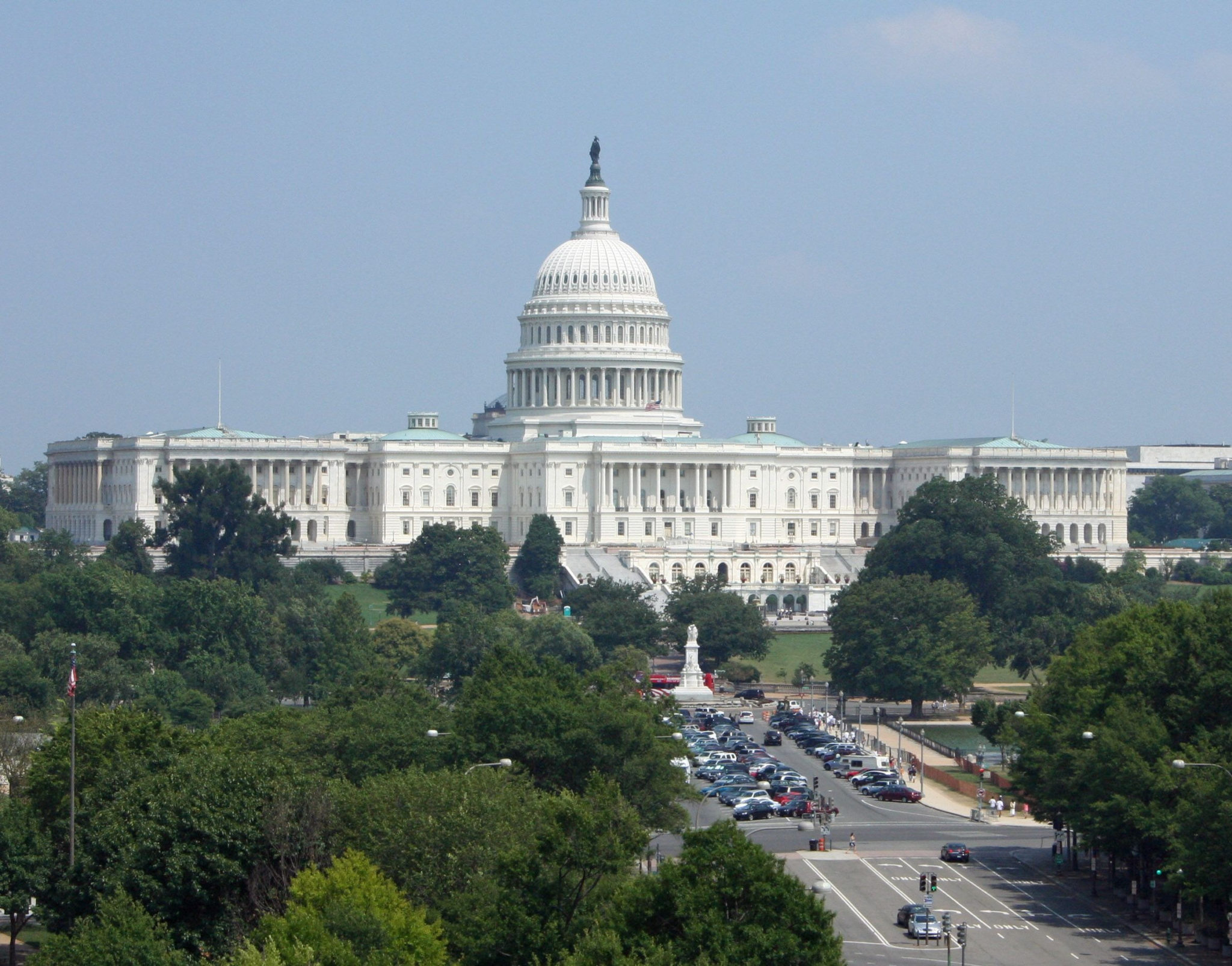 We kicked off Capitol Hill Coast day with a warm welcome to the new cohort of Knauss Fellows who have stepped up to help us deliver meaningful science and services to our nation’s coastal communities.

“The Knauss Fellows are always an impressive group, and the class of 2019 is no exception,” says Rebecca Roth, NERRA’s executive director. “It is inspiring to see this talented group of young professionals apply their academic knowledge to help solve real world problems faced by coastal and ocean programs like the NERRS.”

Hosted by NERRA and our partners at the National Association of Counties and the Coastal States Organization, the event attracted more than 25 legislative- and executive-placed fellows.  They received an introduction to coastal zone management programs, the work of the counties, and NOAA’s Digital Coast platform, which is packed with tools and resources the interns can use in their work.

“Growing up near the coast I was able to see firsthand the opportunities and issues these dynamic environments present every day,”  says Christine Hirt, Marine Policy Fellow. “I’m so excited to be a SeaGrant Knauss Fellow because I want to work towards finding economically viable and socially acceptable solutions to our nation’s most pressing coastal needs.The Office for Coastal Management is a great place for me to begin understanding how our government works to protect residents, the coastal economy, and our natural resources.” 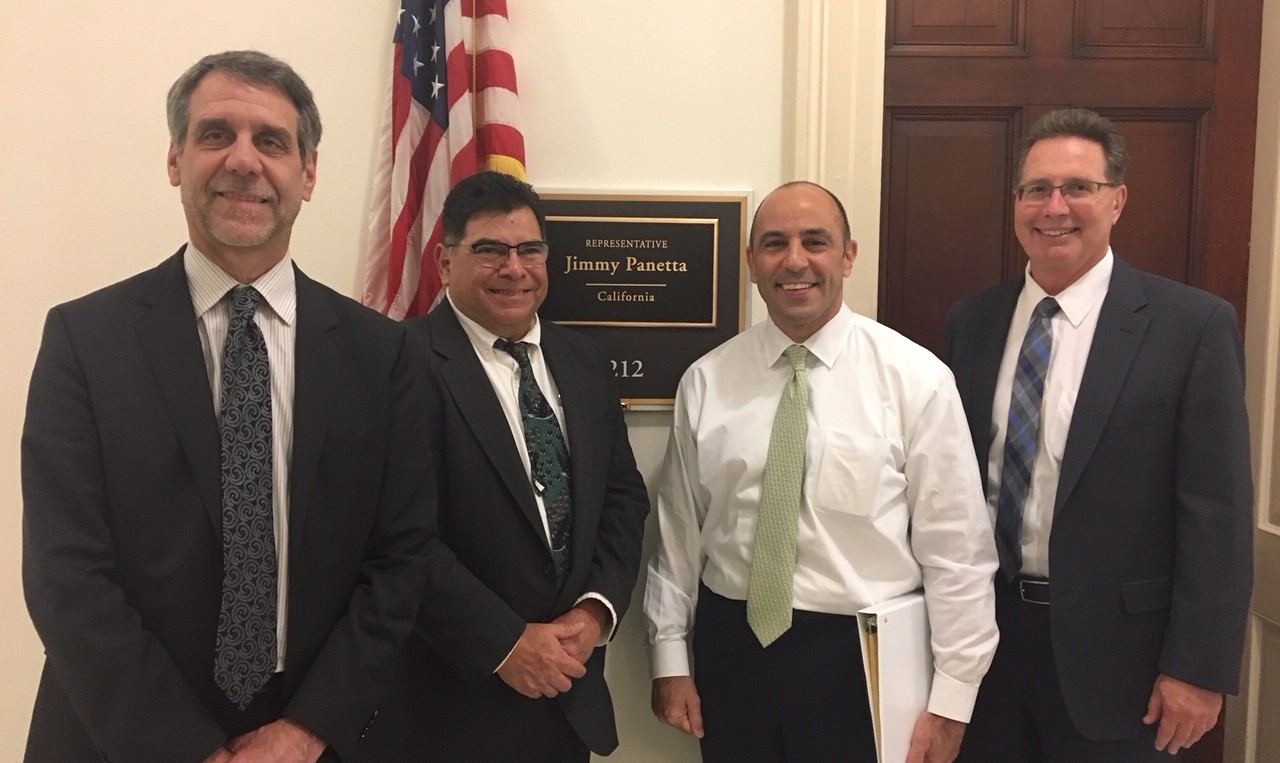 NERRA was out in force on March 13 for Capitol Hill Coast Day 2019!

They took their message to the Hill, where they were met by engaged congressional staff, and in some meetings, their Senators or Representatives. In all instances, they were greeted warmly and able to share stories of  work in their community and their vision for furthering resilience back at home.

Luckily for the NERRA Board Members who visited the Hill that day, Reserve friends from around the country had already started the conversation. For weeks, letters had been pouring into congressional offices, letting them know how important Reserves are in their states. All of the offices that received these messages let NERRA board members know how much they appreciated hearing from the folks “back at home.” 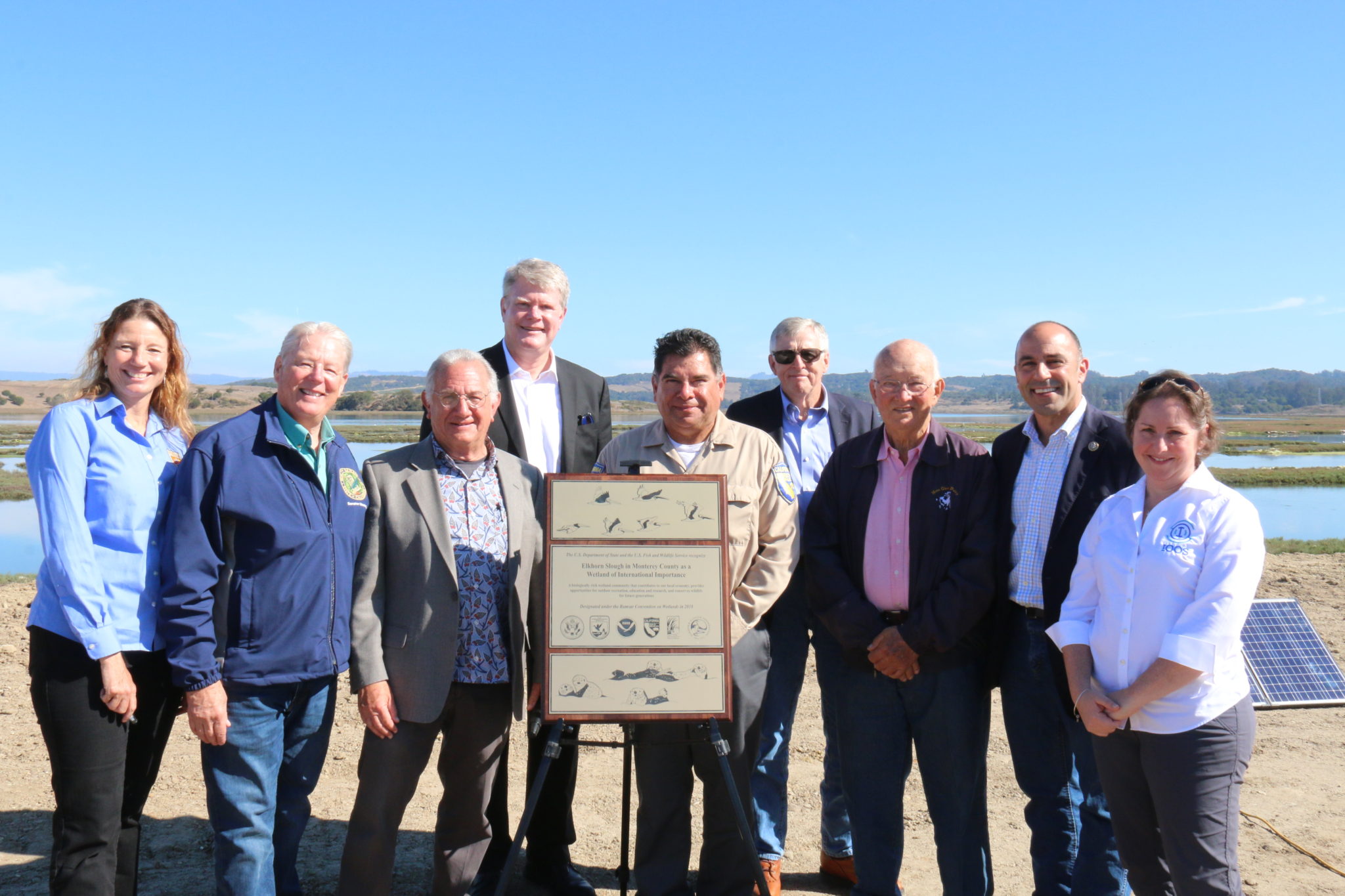 We always knew that California’s Elkhorn Slough was an extraordinary place and now the rest of the world does, too! On October 5, the Slough was designated as a Wetland of International Importance under the Ramsar Convention on Wetlands. It joins a network of 38 wetlands in the U.S. and more than 2,330 worldwide that was formed as a result of one of the oldest environmental treaties, the Convention on Wetlands of International Importance, adopted in Ramsar, Iran, in 1971.

Beautiful weather, wildlife, and long-time champions of the Slough turned out to commemorate the event. “I am proud that Elkhorn Slough is being recognized internationally for what we on the central coast of California have long known, that this wetland is an environmental crown jewel,” said California Congressman Jimmy Panetta. “This designation is a reminder of the importance of protecting the diverse wildlife and conserving these waters for future generations to enjoy.”

Elkhorn Slough covers more than 1,700 acres and is home to thousands of migratory shorebirds, fish, invertebrates, and marine mammals. It attracts visitors from across the globe for work, play, and study. “Every day, hundreds of people from kayakers to birdwatchers and other visitors enjoy the sea otters, seals, fish, shorebirds, eelgrass beds, and marshes of the Elkhorn Slough,” observed Mark Silberstein, executive director of the Elkhorn Slough Foundation.

The Foundation and the Elkhorn Slough Reserve hosted the designation ceremony at the Hester Marsh Restoration site, a $6.5 million, 61-acre wetland restoration project that is providing the elevation needed to help the marsh withstand changes in sea level over the next century. Without restoration, the Slough’s remaining marshes are projected to drown within 50 years due to sea level rise.

“The wetlands at Elkhorn Slough, just like those at every Reserve in our system, benefit all of us,” says Rebecca Roth, NERRA executive director. “Reserves protect more than 1.4 million acres of beautiful coastal land that we can experience and enjoy in many ways. Teachers, students, families, businesses, communities all rely on their Reserves to help us understand and manage estuarine environments.” 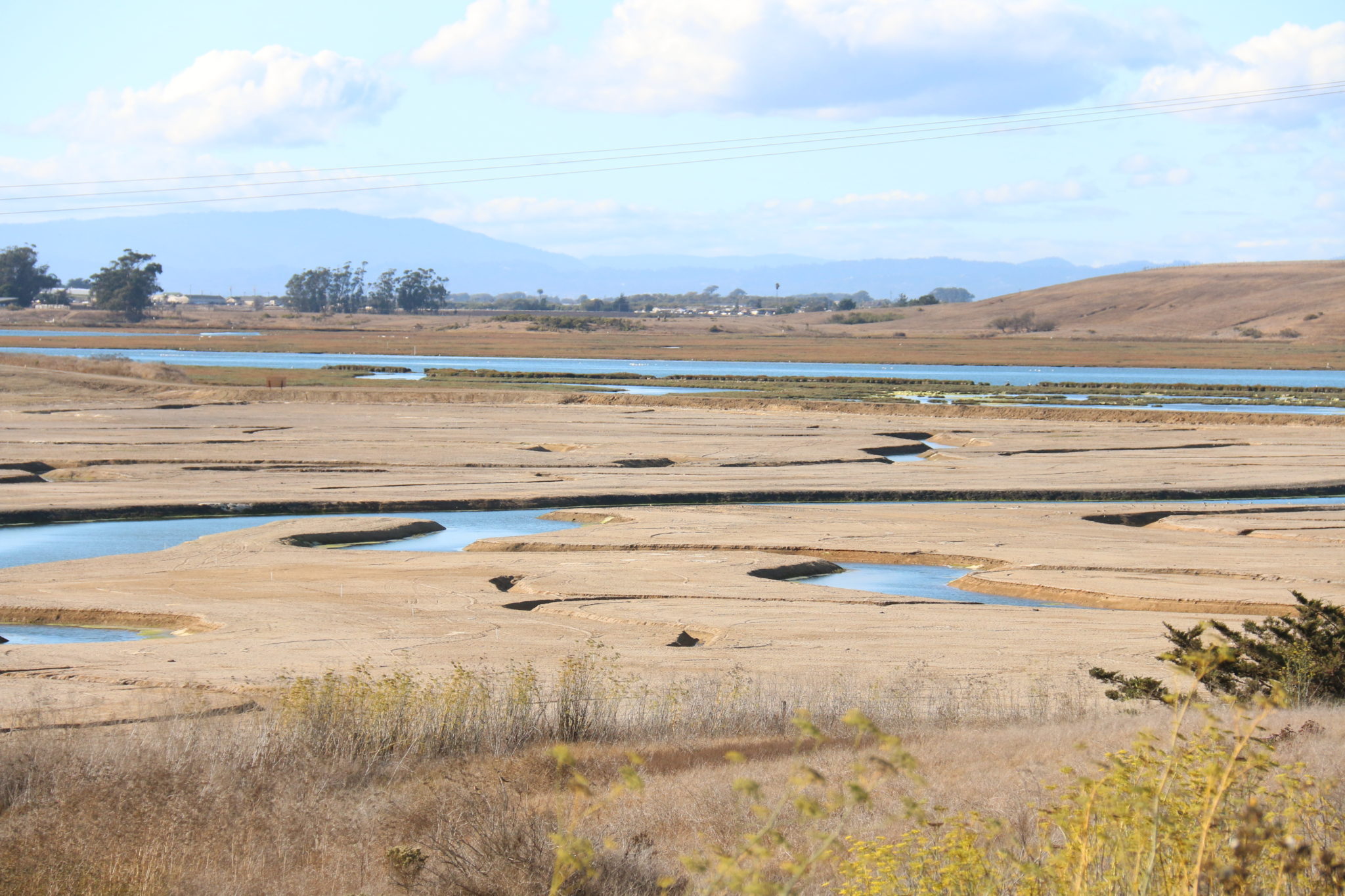