Reducing Plastics in the Great Lakes

Reducing Plastics in the Great Lakes 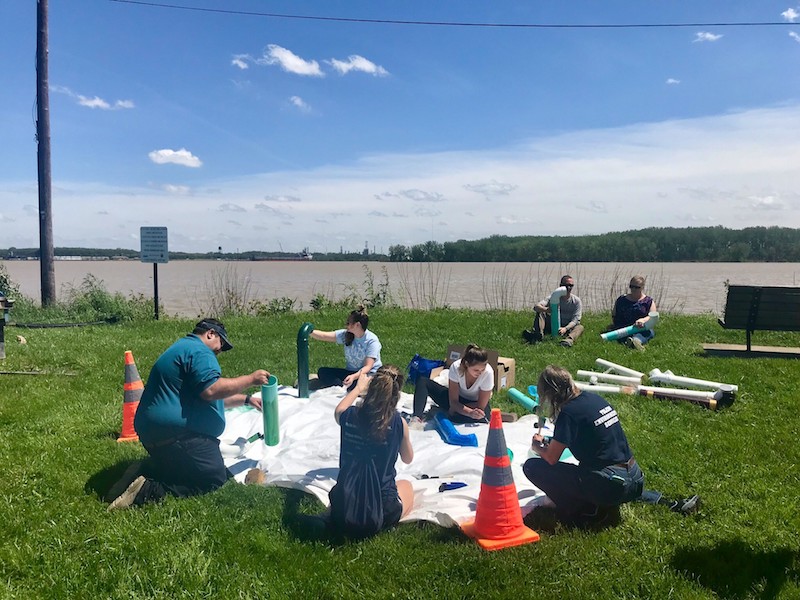 Plastic pollution doesn’t discriminate—it’s a challenge for our oceans and our Great Lakes, which receive 22 million pounds of plastic trash each year. The problem has become a priority for Lake Erie communities.

“By reducing plastics and debris we improve our water quality; we know that water is our region’s greatest natural resource,” said Patekka Pope Bannister, Commissioner of Plant Operations in the City of Toledo’s Division of Water Treatment.

In response, Emily Kuzmick from the Old Woman Creek Reserve’s Coastal Training Program is working with the city and other partners to identify collaborative, innovative ways to meet the challenge. In May of this year, the Reserve co-hosted a workshop on plastics reduction at the request of the City of Toledo’s Division of Environmental Services.

“Emily Kuzmick and the Old Woman Creek [OWC] Reserve were paramount in assisting the City of Toledo with an informative and interactive afternoon,” said Marisa Stewart, a senior environmental specialist for the City of Toledo. “She coordinated multiple, knowledgeable, presenters who provided fun hands-on experiences to make the workshop even more interesting. Thanks to volunteers and funds from OWC, the workshop was free, and as a result, we were able to reach many people.”

Kuzmick’s work is part of a larger plastics reduction working group in Northern Ohio that involves a partnership of municipalities, agencies, and nonprofits.

“Having municipal, nonprofit, and business partners helps us integrate our program within larger, related initiatives,” she says. “For example, we are hoping to integrate other regional initiatives, like the Surfrider Foundation’s Great-Lakes Friendly Restaurants, into future workshops with associated partners to give businesses more tangible solutions to and rewards for reducing single-use plastic waste.” 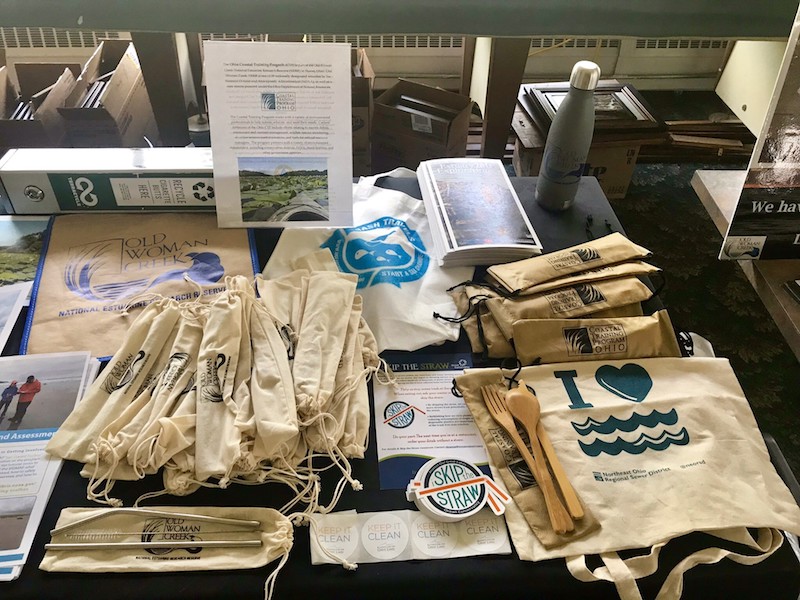 The workshop shared alternatives to single-use plastics, such as metal straws, reusable cutlery, and canvas bags.

Every Reserve’s Coastal Training Program is designed around the needs of local communities and decision makers, and increased understanding of marine debris has become an environmental literacy target for the Old Woman Creek Reserve.

“We look at educational and outreach gaps for different communities to set our program goals,” says Kuzmick. “The fact that marine debris is not just an oceanic issue is something that people really need to hear.” 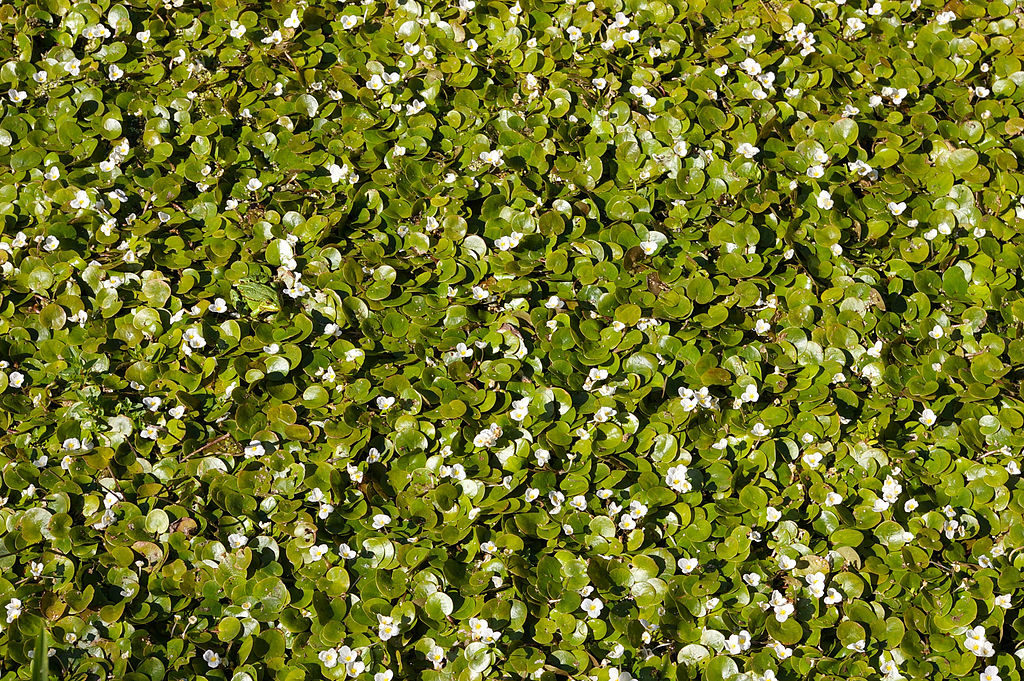 Thick mats of invasive European frogbit can crowd out native vegetation if left un-checked. Volunteers at Old Woman Creek clocked over 100 hours this summer to manually remove frogbit and keep the waters of their estuary diverse and well-managed.

Where other methods fail, there’s one thing we can always count on—NERRd power. The challenge? The arrival of European frogbit at Ohio’s Old Woman Creek in 2017.

The invasive plant’s heart shaped leaves and delicate white flowers belie its aggressive nature: over the course of one summer, thick mats of frogbit had choked the estuary’s eastern and northwestern shores, crowding out native vegetation and threatening local diversity.

In response, Old Woman Creek’s stewardship and education staff organized the Frogbit Strike Team. A team of approximately ten local volunteers stepped up to learn how to identify and remove the plants and document their efforts. In May of 2019, they rolled up their sleeves, grabbed their paddles and spent approximately 140 hours removing more than 20,000 frogbit rosettes.

Some of the volunteers came from Cleveland Metroparks, an organization that connects residents and visitors to the area’s parks and reserves and offers opportunities to get involved in conservation and education projects.

“We enjoyed the challenge of hunting for plants and appreciated being on the water with researchers and biologists from state and county agencies,” says Mark Warman, who heads the Cleveland Parks Aquatic Invasive Species project. “If we can halt the spread of European frogbit in places like Old Woman Creek, all of our water resources around Cleveland and Ohio’s Lake Erie basin are more secure.”

“With invasives, eradication usually isn’t an option, but thanks to our volunteers, our waters are pretty well-managed,” says Jennifer Bucheit, education coordinator at the Reserve and co-creator of the strike team. “We don’t see entire lagoons covered with this stuff the way we do in other protected areas.”

Bucheit says there’s another benefit too: “I have also had volunteers come to other programs because they were involved in the Strike Team and fell in love with it. They’re looking for more exposure to the estuary.”

“People find picking frogbit to be fun, addictive, and a bit competitive,” says Breann. “It’s like an easter egg hunt, but in one of the most beautiful places in the world, and ending in the most satisfying feeling of protecting this special place.” 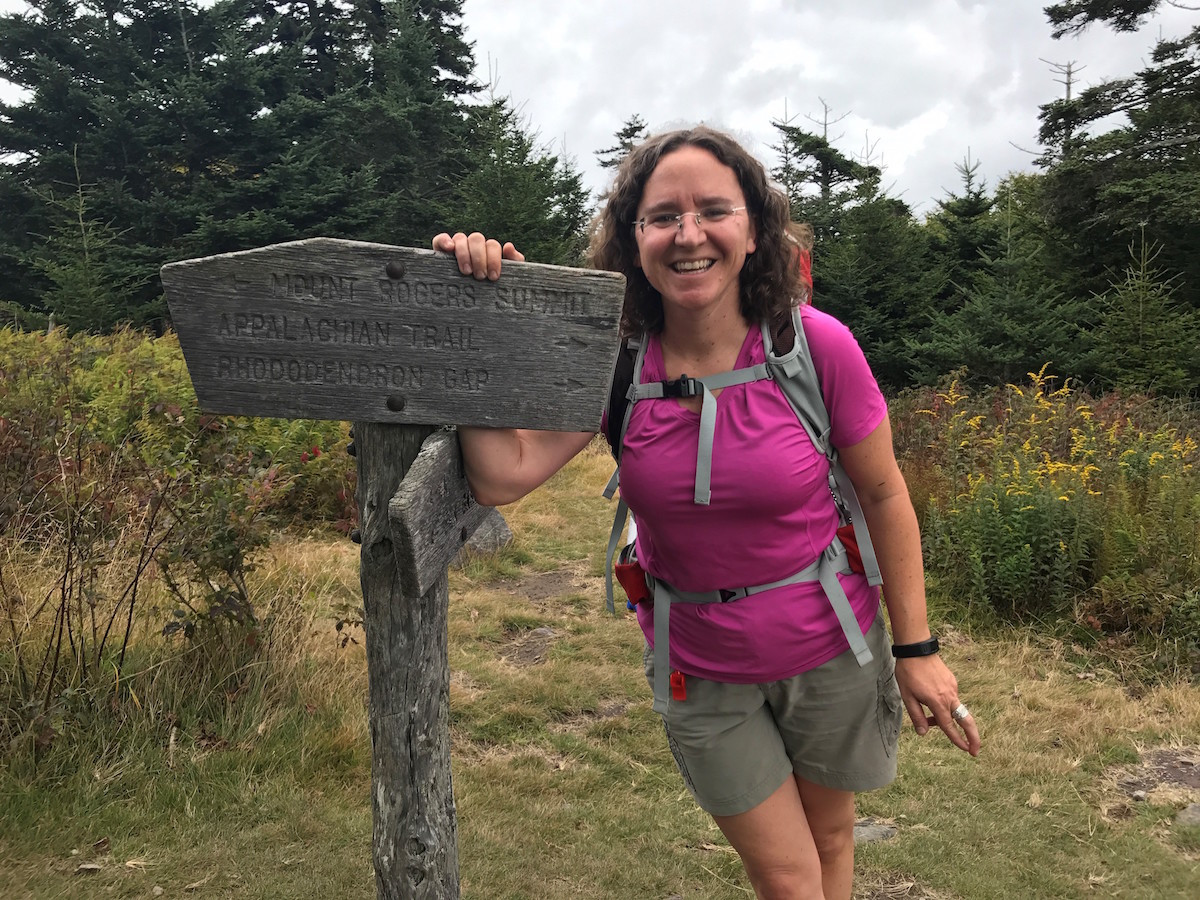 Our Ohio Reserve has a new manager: please join NERRA in giving Janice Kerns a big NERRd welcome! She comes to us from the Division of Wildlife in Ohio’s Department of Natural Resources, the state partner for the Old Woman Creek Reserve.

“I’m excited to work with my staff to build partnerships that broaden our understanding and improve conservation of coastal wetlands within the Great Lakes,” says Janice, who has devoted her career to research that supports sound management and long-term sustainability of natural resources.

Janice’s work has focused on issues that are important for all Reserves—stock assessment and enhancement, food web ecology, aquatic habitat restoration, and sustainable fisheries management. Her interests have taken her from a Peace Corps stint in Gambia to graduate work in Tennessee and Florida and finally to the Great Lakes region.

“My approach is to use a combination of public input and field and historical data to identify and answer management questions,” she says. We think she will find many like minds and kindred spirits in our national network—what do you think? 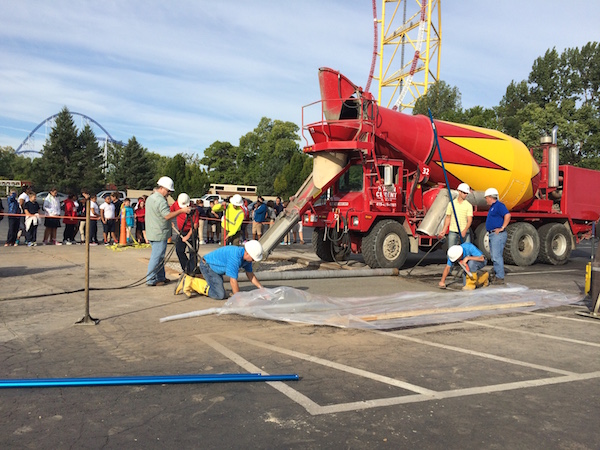 In Ohio, approximately 54% of the watersheds are impaired due to silt and sedimentation that comes from runoff. As concern for water quality and a need to comply with environmental requirements becomes more pressing, green infrastructure, such as pervious pavement and bioretention cells, is starting to take root.

To help local contractors adjust to this transition, the Old Woman Creek Reserve teamed up with the Erie Soil and Water Conservation District to create a new program for those involved in the oversight, construction, installation, and design of stormwater infrastructure to get more “clean and green” in their work. Today, the Erie County Clean Water Contractor Program is helping to expand contractor skill sets, boost their understanding of National Pollutant Discharge Elimination System (NPDES) permits, open lines of communication between them and regulatory agencies, and create a pipeline that allows them to access the latest science.

“Before this, many of our trainings focused on engineers and planners, rather than those performing the actual on-site construction,” observes Emily Kuzmick, the Coastal Training Coordinator at the Old Woman Creek Reserve. “Community support and positive responses from participants has encouraged us to plan more innovative outreach events, such as expos with vendors and social networking opportunities for contractors.”

Participants in the program are certified as “Clean Water Contractors” by pledging to participate in one approved training event each year, attending a sediment and erosion control event once every two years, and practicing “clean water” actions, ranging from sediment and erosion control measures at construction sites to implementation of stormwater control measures.

Alongside a high rate of participant satisfaction, the program’s success is reflected in the increasing number of green infrastructure projects implemented in Erie County in 2016. The Erie Conservation District also reported a change in behavior regarding erosion and sediment control implementation on active construction sites during their routine inspections. 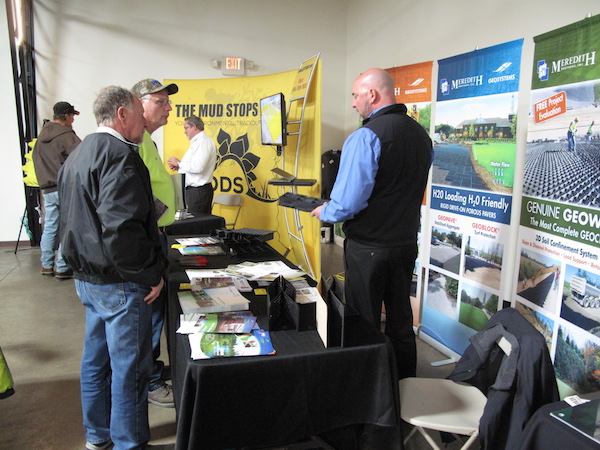 Graduate Research Looks at Impact of Hardened Shorelines on Fisheries

Graduate Research Looks at Impact of Hardened Shorelines on Fisheries

Ohio has more than 300 miles of coastline along Lake Erie. Much of this land has been altered or has infrastructure in need of repair or replacement. As local communities plan for the future, they need to better understand how shoreline armoring and existing vegetation impact recreational and commercial fisheries. 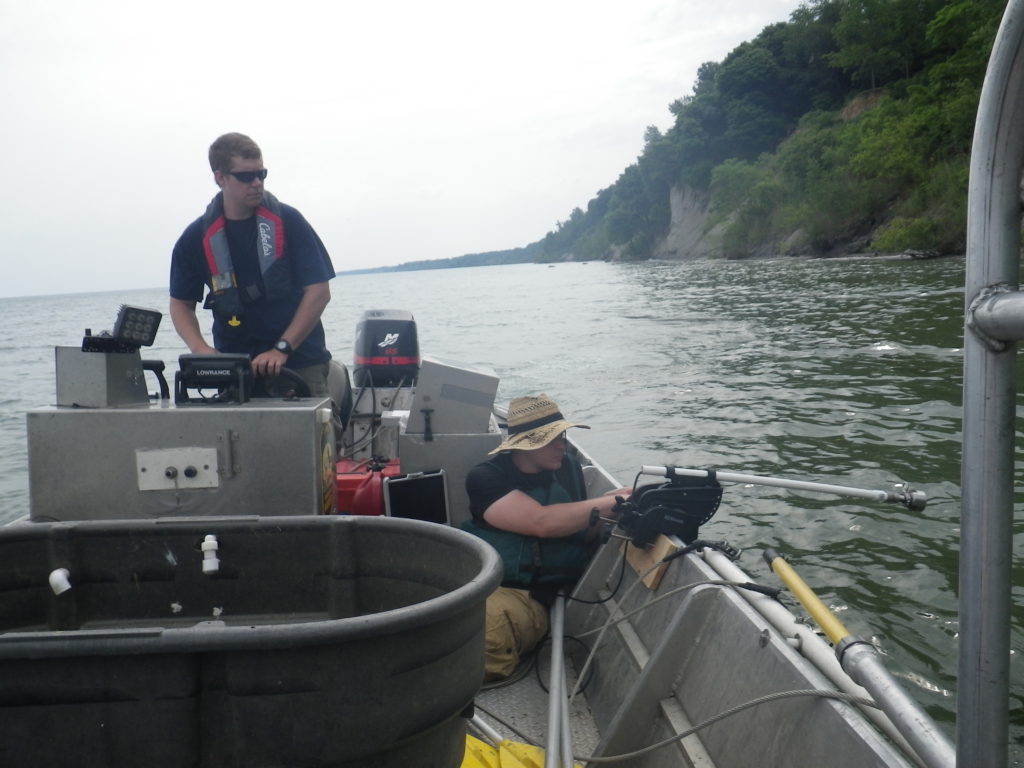 Graduate student Marty Simonson from the University of Toledo has been working with the Old Woman Creek Reserve, the Ohio Division of Wildlife and the Coastal Program to study this issue. For Marty, the Old Woman Creek has been a great base of operations for field work and an integral partner in engaging stakeholders in discussions about coastal land design.

Marty’s research found that wave energy is negatively correlated with fish species diversity, and in some cases, shoreline armoring has created higher energy habitats for fish. Low wave energy environments often have more vegetation and habitat complexity, which leads to more fish. These findings have already been used in the design of coastal training workshops focused on nature-based shorelines and will inform shoreline practice design and review along Lake Erie.