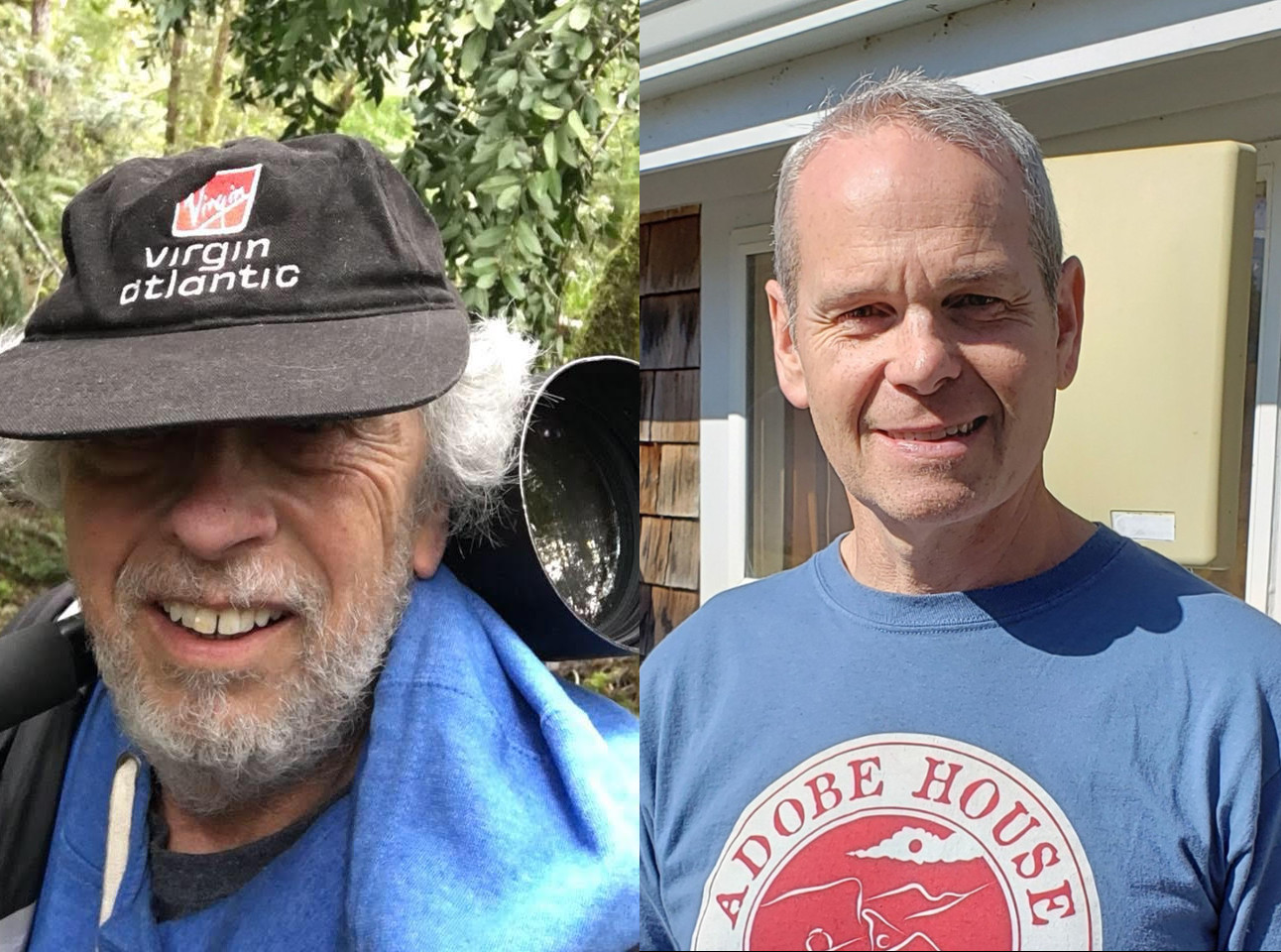 Oregon’s South Slough Reserve has gone through some changes this year, with the retirement of John Bragg as coastal training program (CTP) coordinator and the hiring of Keary Howley as a Geographic Information System (GIS) specialist. Please join NERRA in warmly thanking John for his 18 years of service and welcoming Keary to the NERRd family!

John retired at the end of January after 18 years of service. As CTP coordinator, he  offered training and technical assistance to Oregon decision makers on habitat restoration, water quality, invasive species, human impacts on protected places, nearshore ocean processes, and climate change. These trainings provided the flexible, practical assistance local coastal managers needed as they responded to a range of challenges.

John is also a photographer who contributed numerous photos to the Reserve’s library over the years. He designed many of the Reserve’s posters and other publications, which showcased his eye for artistic design.

John has plans to travel, but expects to remain in Coos County in the near future, “where there are still lots of pictures waiting to be shot.” He will also continue to be a staunch fan of Reserves and the special places they protect.

“More than ever, it’s the voices of Reserve friends and advocates that will keep our elected representatives aware of the value of estuaries, wetlands, and clean water,” he says. 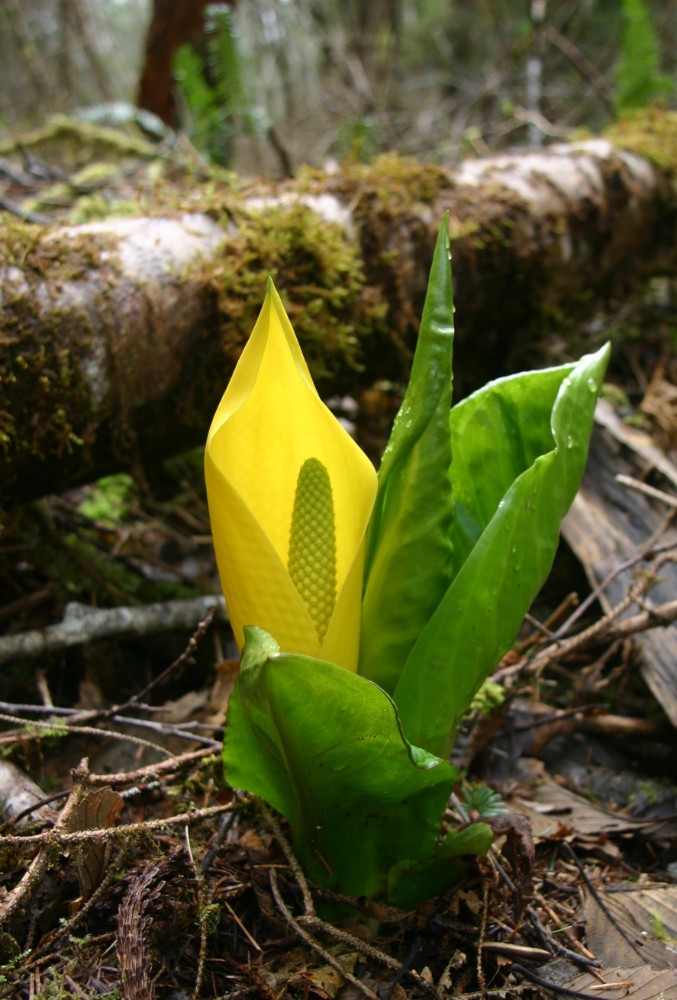 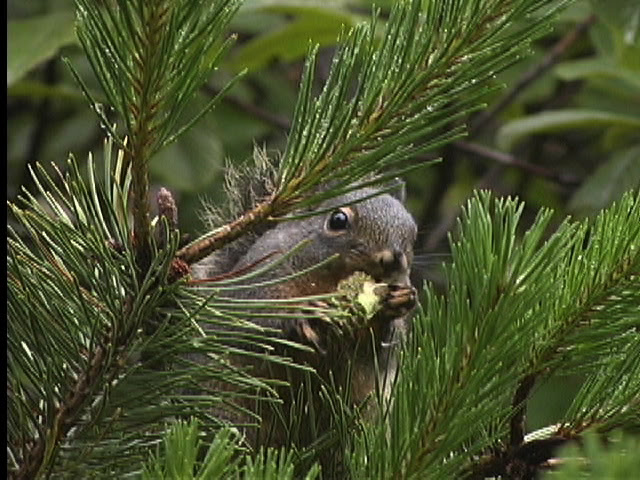 Keary Howley comes to the Reserve after moving to the Coos Bay area with Heather, his wife of 27 years. Together, they’ve been enjoying cycling, hiking, camping, skiing, paddle boarding, backpacking, and gardening in their new state. “I’m excited to be part of the South Slough  Reserve team; it gives me a chance to apply my diverse GIS experience in a new—to me!—coastal environment and increase my knowledge,” he says.

Keary has a bachelor’s in biology and a master’s in geography from the University of New Mexico. He has worked in the GIS field for nearly 20 years in both private and public sectors and started a GIS program at New Mexico’s San Juan College, where he taught for three years.

Much of Keary’s work focuses on creating maps, collecting GPS data, and analyzing spatial data. He enjoys the variety of projects and problem solving. “With GIS there’s always a number of possible solutions to any question and figuring it out is half the fun,” says Keary. 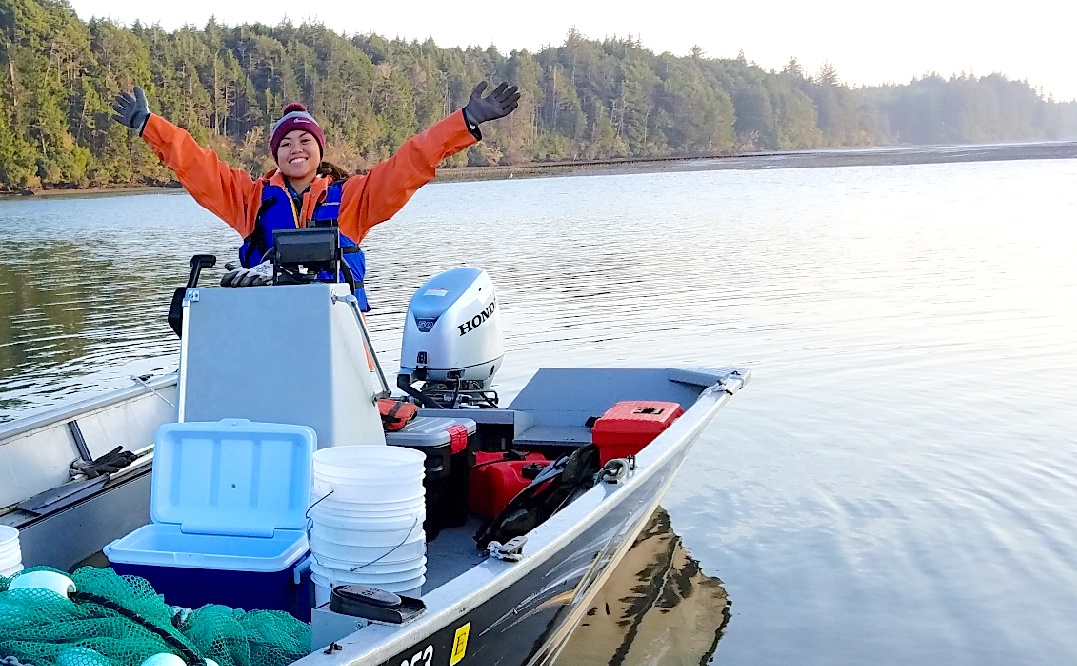 The Friends or Oregon’s South Slough Reserve provide opportunities for young scientists like Kanoe Lizama (above) to get the experience they need to find jobs in environmental science. Photos courtesy Kanoe Lizama.

After Kanoelani (Kanoe) Lizama graduated from Colorado Mesa University with a degree in environmental science and technology, she was ready to put her education to work. When she started to look for a position, however, she found her degree was not enough for prospective employers who wanted candidates with relevant work experience. Then she discovered an internship opportunity sponsored by the Friends of South Slough Reserve.

“This position offered a range of hands on experience working directly with the Reserve’s research and monitoring staff, and so I applied without hesitation,” says Kanoe. 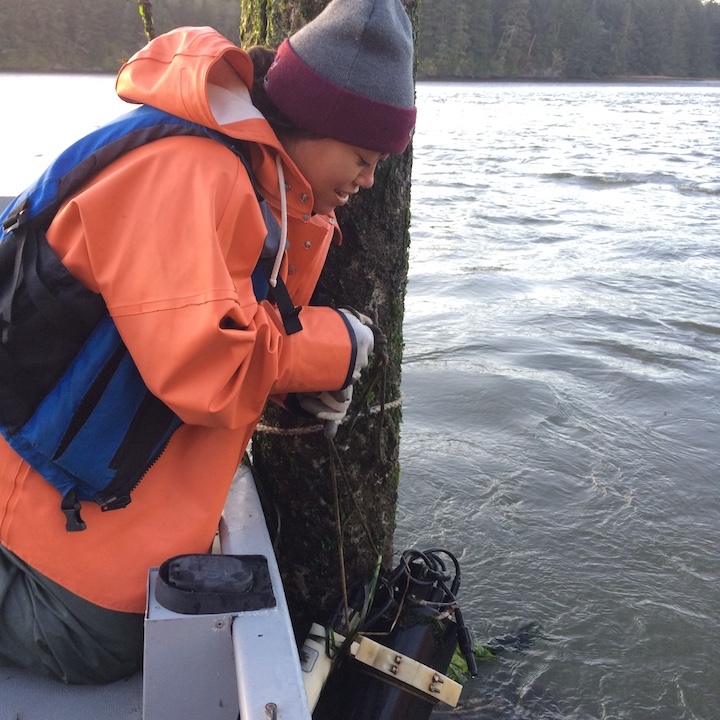 “The experience taught me useful skills for lab and field work, but the the biggest take away was understanding the impacts that estuaries such as South Slough face due to human and natural related causes, observes Kanoe. “We monitored native eelgrass, which has dramatically declined in the estuary over the past decade. There is a need for greater awareness in protecting natural resources in coastal areas.”

Kanoe had another big aha moment. Oregon is not only beautiful—it’s an interesting place to live and work.

“Being exposed to Oregon’s beautiful coastline and forests greatly influenced my recent move from Hawaii to Oregon,” she says. “This opportunity also allowed me to network with professionals in the environmental field and gave me a better understanding as to what their days look like—this helps me feel more comfortable as I continue to pursue this career.” 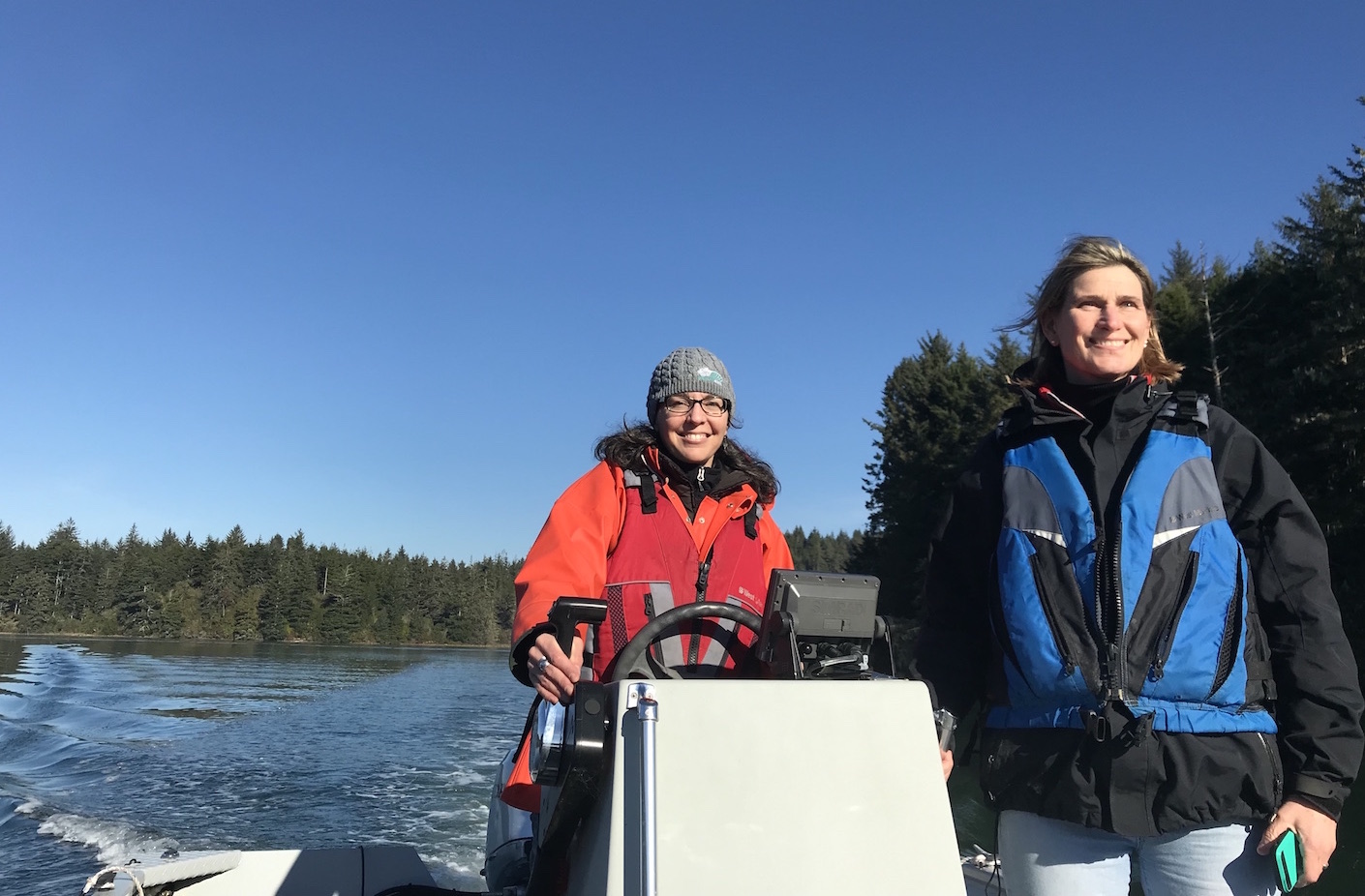 Ever wondered what it would be like to use the tricorder from Star Trek? To scan an environment and learn what kinds of creatures live there? Reserve scientists are partnering with genetics researchers to refine a technology that feels like science fiction, but provides real world capacity to detect rare or invasive species more affordably, and with less impact, than with traditional methods.

Reserves in Maine, New Hampshire, and Oregon are working with a research team at the University of New Hampshire to develop eDNA-based monitoring protocols that can be used for a range of natural resource management issues—from monitoring American eel migration in New England to invasive crab detection in the Pacific Northwest.

Environmental DNA (or eDNA) comes from genetic material that animals shed through scales, shells, fur, feces, fragments of tissue, and more. To extract this DNA from the environment, scientists take a simple water or sediment sample and send it to the lab for a low-cost analysis. This approach could dramatically change the way we survey local streams, rivers, and estuaries for species that are invasive, rare, or difficult to track by traditional monitoring methods. 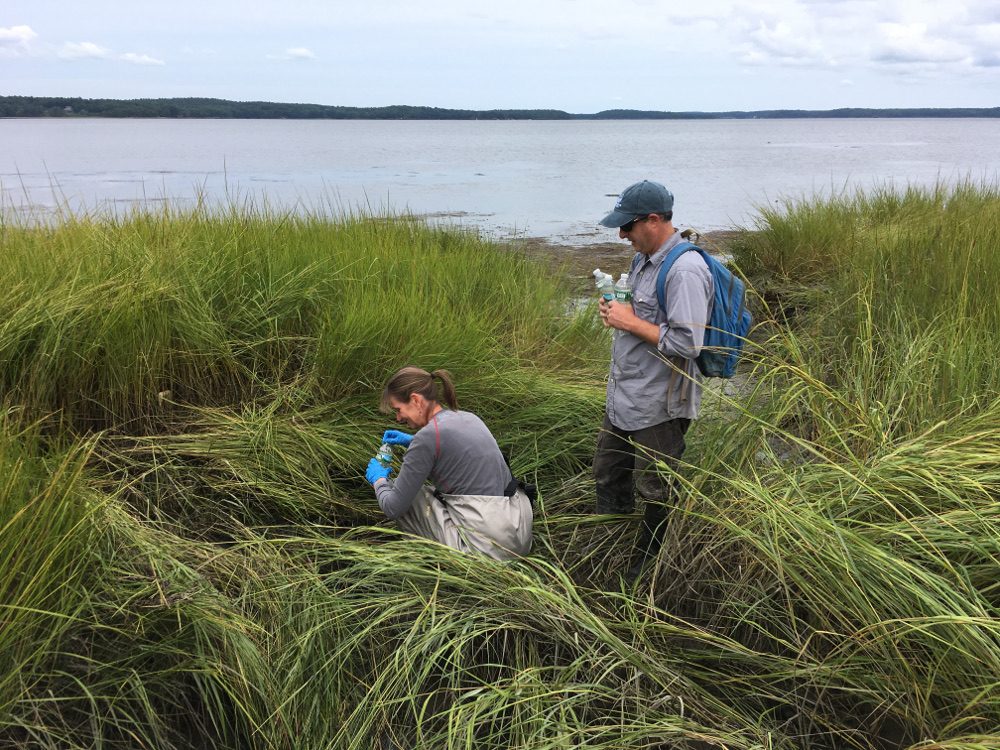 Through a process called “metabarcoding,” eDNA techniques can identify dozens of species to get a more comprehensive picture of the ecosystem. The wealth of information that eDNA provides can inform resource management decisions without the need to capture live animals or plants.

“Our Reserve is excited to explore the possibilities of this novel technology for early detection of invasive crabs and seaweeds, as well as to understand how climate change can affect our biological communities,” says Chris Peter, research coordinator at Great Bay Reserve in New Hampshire.

By testing this approach at Reserves with different research questions, management concerns, and biological communities, the research team has been able to assess the potential of this tool for widespread and diverse use.

“The NERRS provides a network of sites where scientists collect information on estuaries using standardized methods that have been developed by the system partners,” says UNH researcher and project lead Alison Watts. “By collaborating with multiple Reserves we are able to develop and test our methods at different types of sites, and gather input on how best to develop procedures that could be adopted at additional sites in the NERRS and beyond.”

eDNA was recently featured in National Geographic as one of the most exciting recent developments in marine science, and it soon be coming to an estuary near you!

This project was funded by the National Estuarine Research Reserve System Science Collaborative, which supports collaborative research that addresses coastal management problems important to reserves and their communities. For more information about this project > 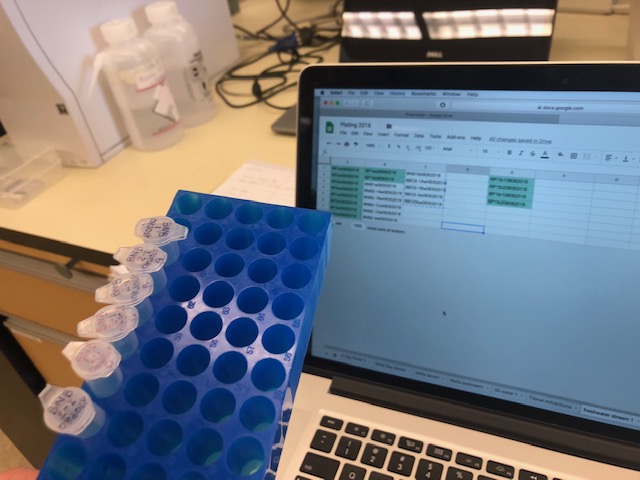 Several extracted DNA samples in the lab ready for analysis. When analyzed, these samples can tell researchers what kinds of species are living in a system, without having to capture and count live animals. This project was funded by the NERRS Science Collaborative.

South Slough Reserve is a Pioneer

South Slough Reserve is a Pioneer

Photo and story courtesy Deborah Rudd, South Slough Reserve
The South Slough Reserve is special. It was the first Reserve designated in the National Estuarine Research Reserve System and there have be many “firsts” since that 1974 designation. Our Reserve was among the first groups in our little, coastal community to bring understanding and appreciation of estuary habitats and to create lasting partnerships to restore and study wetlands, uplands and waterways. We became a resource in our community for educators and students and for families who bring their children to experience nature and learn about their surroundings. Today, the Reserve is a sanctuary for many—a place to contemplate natural beauty and richness away from distraction. South Slough Reserve is special to the wildlife as well. It is a place where plants and animals can exist in their natural state, as undisturbed as possible. Reserve staff give their all, continually seeking the best ways to administer and conduct science, restoration, and education. The South Slough Reserve holds a special place in many of our hearts, including my own. Every Reserve is special. And everyone has a Reserve story to share. Why do you care about your Reserve? How has it made a difference in your life? Have a few minutes today? We want to hear your story.

Growing Up at South Slough

Growing Up at South Slough 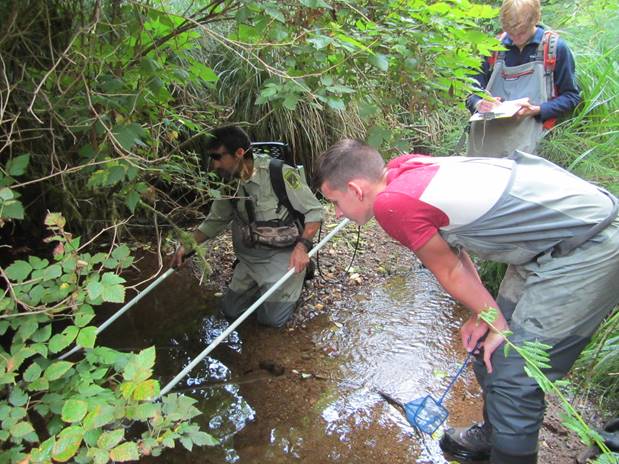 My name is Luke Donaldson and I am from Coquille, Oregon. I have pretty much lived here all my life (14 years). As a volunteer at South Slough, I have helped with a little bit of everything: trail maintenance, bird watching, lamprey studies, restoration projects, workshops, kayak expeditions, front desk work, and other research projects.

My first experience at South Slough was as a toddler in 2005 participating in the Tide of the Toddlers program.  Once I was old enough I asked if there were volunteer opportunities that I could participate in as a teenager. I volunteer for the Reserve because I love being outdoors, learning about the estuary, and conservation.

For me the best part of volunteering is the field work and research. Personally, I feel I have had the biggest contribution to the lamprey study, where we caught and measured lamprey in the South Slough uplands. 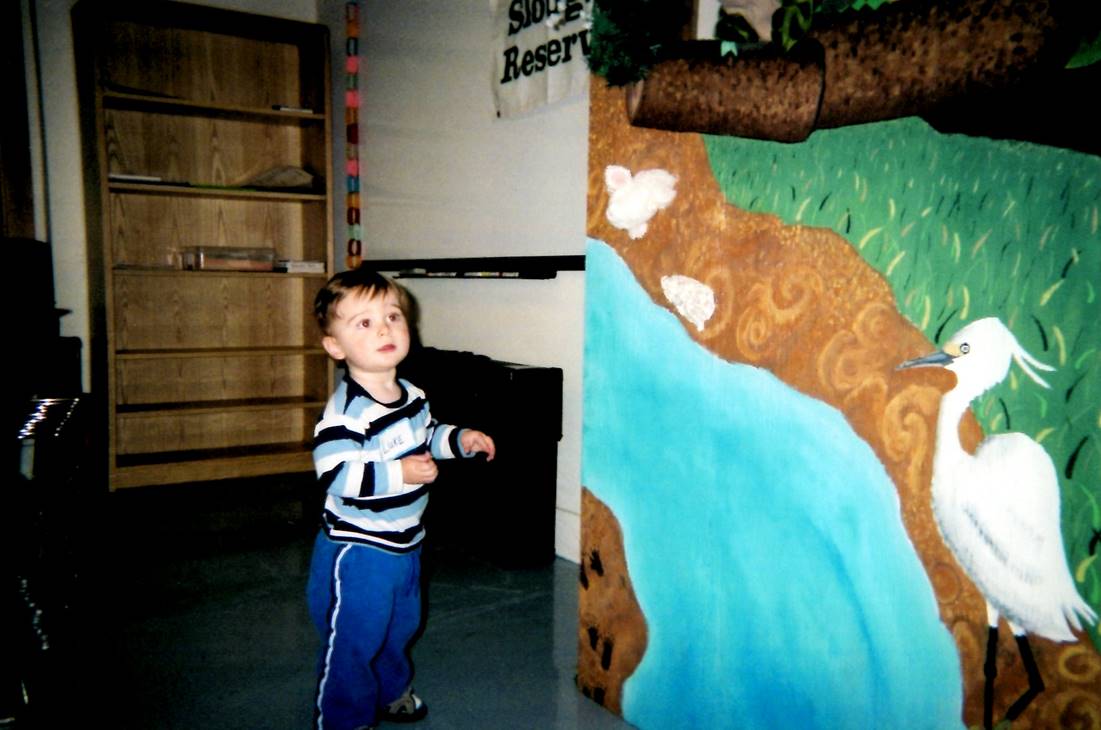 From Around the System… 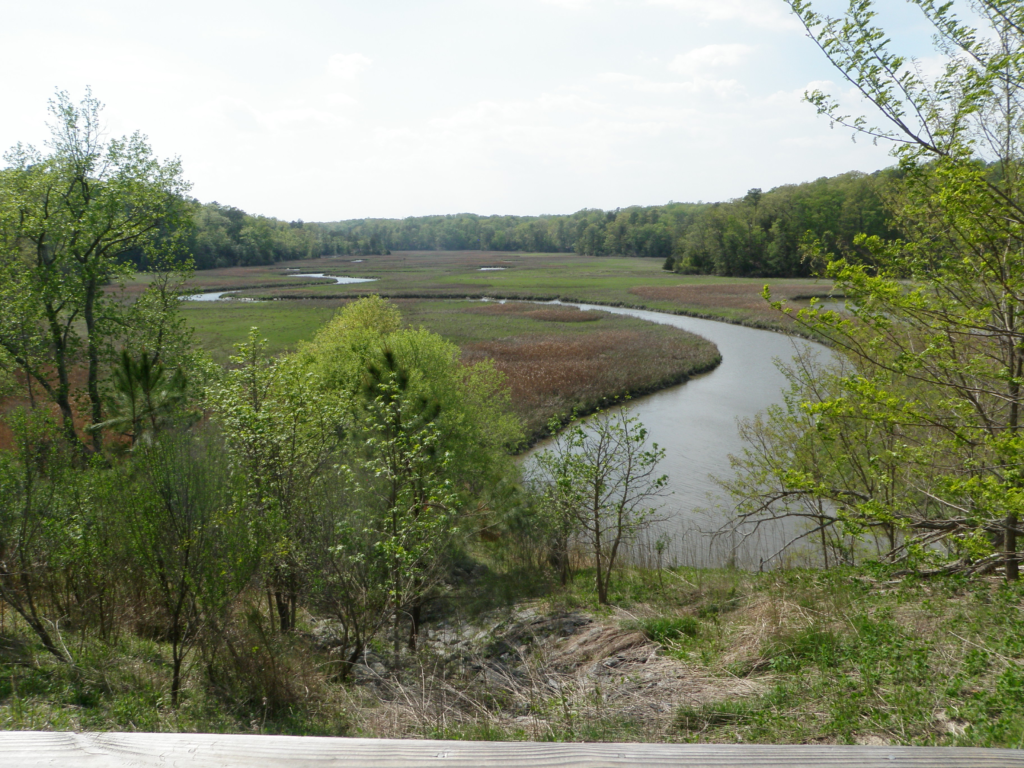 Taskinas Marsh at the Virginia Reserve

What do restoring a painting, a house, and a wetland all have in common? Setting goals for your work depends on what they used to look like. When you’re focused on restoring a wetland along a dynamic, rapidly changing coast, then that’s a tall order. In a perfect world, you would have “before” data describing the site in its pre-degradation state that you could use as a benchmark to track your progress. If you don’t, the next best approach is to compare your site to a similar one that is healthy and has not suffered the same degradation.

A recent study published in Estuaries and Coasts demonstrates the potential for National Estuarine Research Reserves to serve as “gold standard” reference sites for setting wetland restoration goals and tracking progress. Found in diverse biogeographic regions around the country, research reserves are permanently protected and continuously monitored, reducing the potential effort and cost of such a comparison.

In the study, scientists at our Rhode Island, Virginia, Maine, Oregon, North Carolina, and New Hampshire reserves teamed up with the NOAA Restoration Center to examine the progress of 17 tidal wetland restoration projects by comparing them to nine reference sites in or near reserve lands. The study used an RPI (restoration performance index) scoring approach, which compares changes in parameters at different sites over time to determine restoration progress. Restoration sites exhibited an intermediate level of restoration when compared to the reference sites, consistent with similar assessments described in the literature.

Headwater streams are the birthplaces of watersheds. In Alaska’s Kenai Lowlands, site of the Kachemak Bay Reserve, these streams provide rearing habitats for thousands of paper clip-sized, juvenile salmon each year. Until recently, it wasn’t known that these critically important critters lived so far up the watershed.

Now, thanks to the reserve’s research, we know these streams are productive habitats for juvenile salmon, largely thanks to surrounding landscape features, such as alders and peatlands, that provide nutrients to the streams. The reserve is working with local organizations to conserve these features so that these streams continue to support baby salmon as they make their way to the sea and back again as adults.

You can learn more about this important research in recent publications, including: 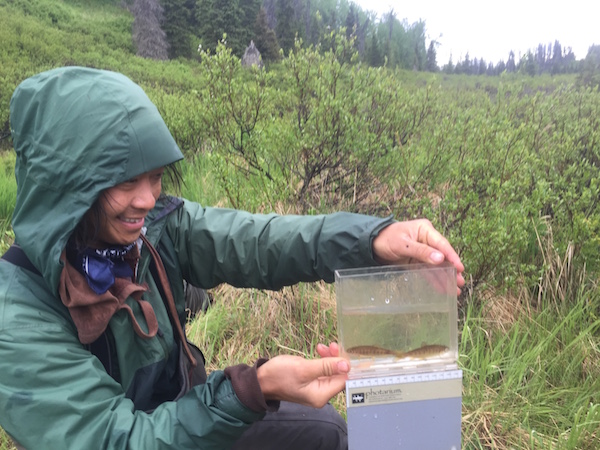 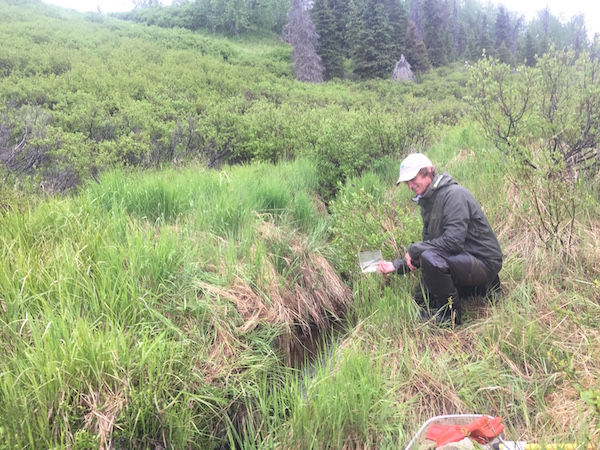