Eye in the Sky Helps Coastal Clean Up 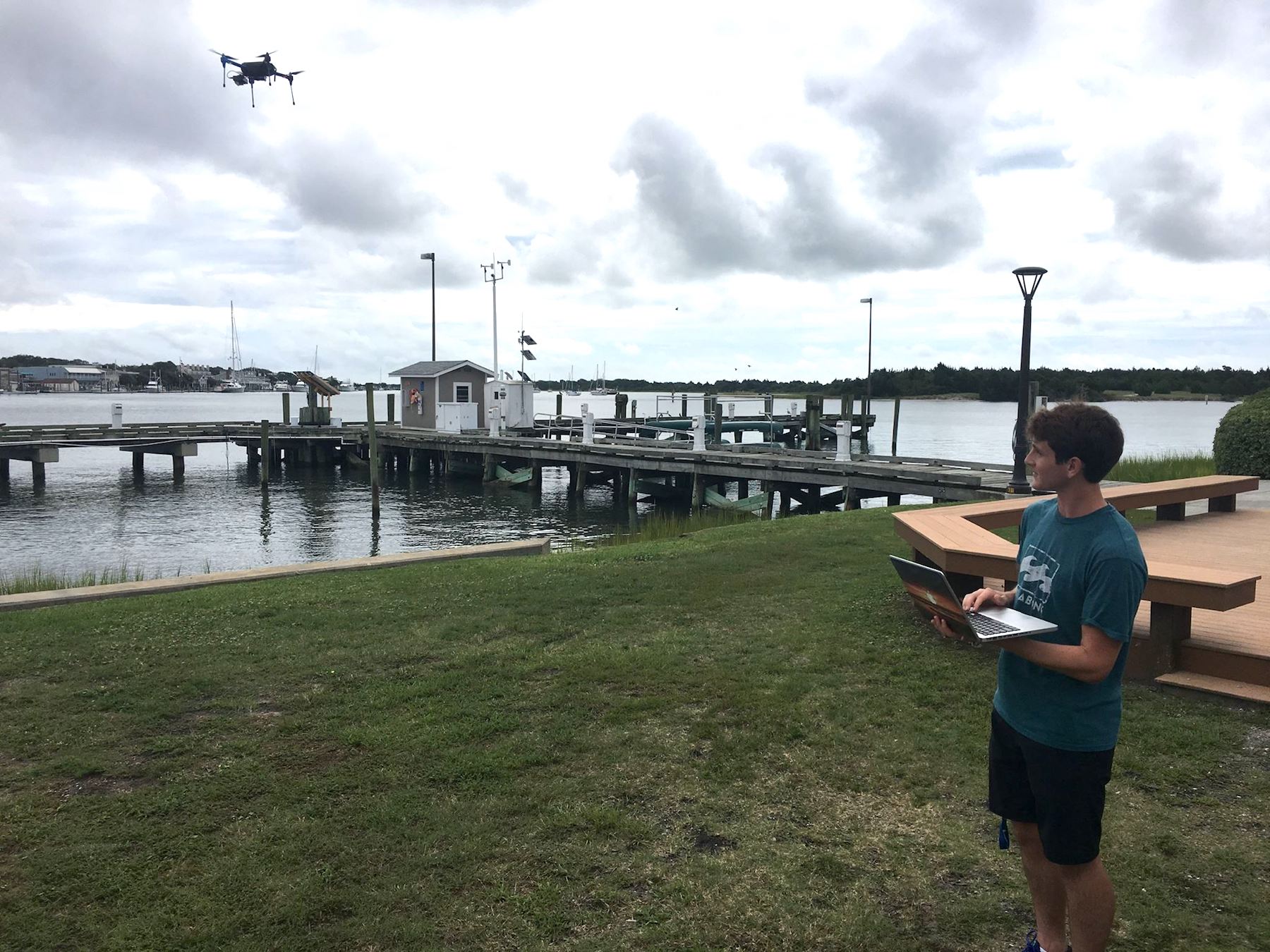 Our North Carolina Reserve and partners are using drones to locate marine debris for clean up. Photo courtesy of Duke University.
Like many coastal areas, our North Carolina Reserve collects marine debris from boaters, businesses, residences, and improperly secured vessels and fishing gear. Larger items are easier t0 spot, but in remote areas, debris can go undetected for months or even years.

What site manager Paula Gillikin needed was a tool to survey the entire area with minimal disturbance to sensitive habitats. Turns out researchers at the next door the Duke University Marine Lab had a solution.

With funding from NOAA’s Marine Debris Program, the Reserve and Duke researchers set out to use drones to map larger marine debris across the Reserve’s Rachel Carson site.

They captured high-resolution imagery of the entire Rachel Carson Reserve using drones. “We were able to clearly show that aerial drones can be a cost-effective way of scanning broad areas of coastal ecosystems for medium- to large-scale marine debris in a relatively small time,” explains Everette Newton, a Duke doctoral student and mayor of nearby Beaufort.

“Once we identified debris, the next step was to prioritize which debris to remove, based on costs and the relative potential habitat benefits,” Gillikin says.

Removing debris was no small task. Waterlogged pilings and dock sections are incredibly heavy and required help from partners to remove. The Reserve team worked with Tow Boat U.S. – Atlantic Coast Marine Group, the N.C. Maritime Museum in Beaufort and the Town of Beaufort to collect and dispose of the debris. They also recruited many hands from the community to help clean up the reserve.= 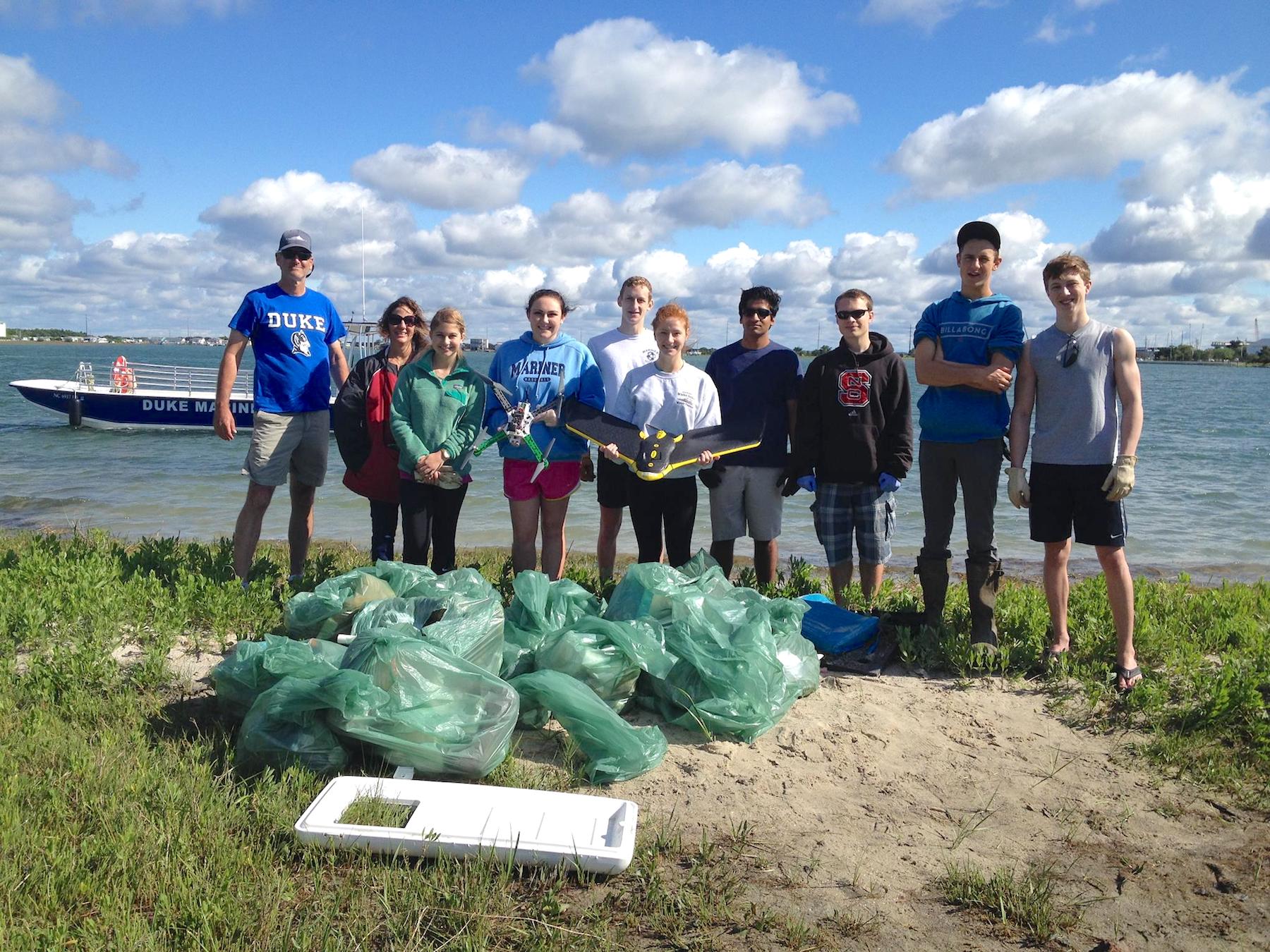 Over the two years of the project, 255 volunteers helped to remove more than 13,500 pounds of marine debris. Photo courtesy of the North Carolina Coastal Reserve.
Volunteers found the debris identified from the aerial imagery, worked together to carefully remove it, collected basic data on the size and makeup of the debris, and handed it off for disposal on the mainland. Most of the large debris consisted of pilings, dock sections and lumber. The vast majority of smaller debris was, no surprise, plastic.

Because marine debris items often have lasting effects on the sensitive habitats where they land, the team monitored damaged areas for habitat recovery.

To boost habitat recovery in other areas — and to offer hands-on learning opportunities — the Reserve team called upon its Seeds to Shoreline Program, where schools raise native Spartina alterniflora, or smooth cordgrass plants, to use in restoration efforts. The Beaufort Elementary School raised 50 seedlings to plant in an area where a piece of plywood had smothered the marsh grass. 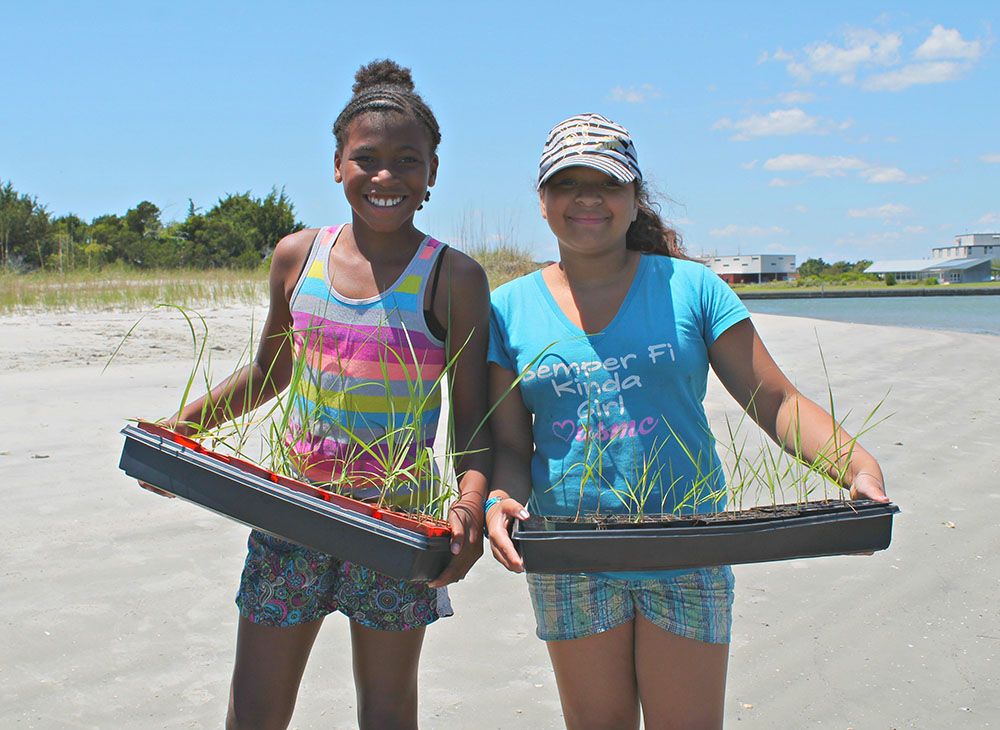 Within three months, the Spartina planted by students was growing well and had filled in the damaged area. Photo courtesy of the North Carolina Coastal Reserve.

Newton sees the need for marine debris surveys in ongoing coastal management. “These efforts are a major step forward in assessing the magnitude of marine debris for municipalities so they can implement measures to reduce this risk to human health and coastal ecosystems,” he says.

This project, along with many others, has catalyzed a state-wide marine debris reduction plan. The N.C. Coastal Federation is leading the planning effort with help from the Reserve program, North Carolina Sea Grant and the N.C. Marine Debris Symposium.

Gillikin is excited about this initiative. “We are working to assess and capitalize on existing research and resources, identify needs, and come up with do-able strategies to beautify and protect our state’s coastline. As a Research Reserve, Rachel Carson is a perfect place to test this new method.”

Thanks to Michelle Brodeur, communications specialist with the North Carolina Coastal Reserve and National Estuarine Research Reserve, for this story.