Thin-layer placement of sediment (TLP) is an emerging strategy to protect tidal marshes threatened by rising seas. A research team led by the National Estuarine Research Reserve System (NERRS) tested the use of TLP at eight Reserves and developed guidance to inform future research and restoration projects that use this technique.

More on this Project

Our nation’s marshes are threatened.

Accelerated sea level rise threatens these valuable marshes nationwide. Some marshes have the potential to migrate to higher ground, but if this migration is blocked by steep slopes or development, they must survive in place or be lost to rising seas.

To protect tidal marshes and their many benefits, we need science-based tools and strategies that can meet the needs of wetland managers in different regions of the country. 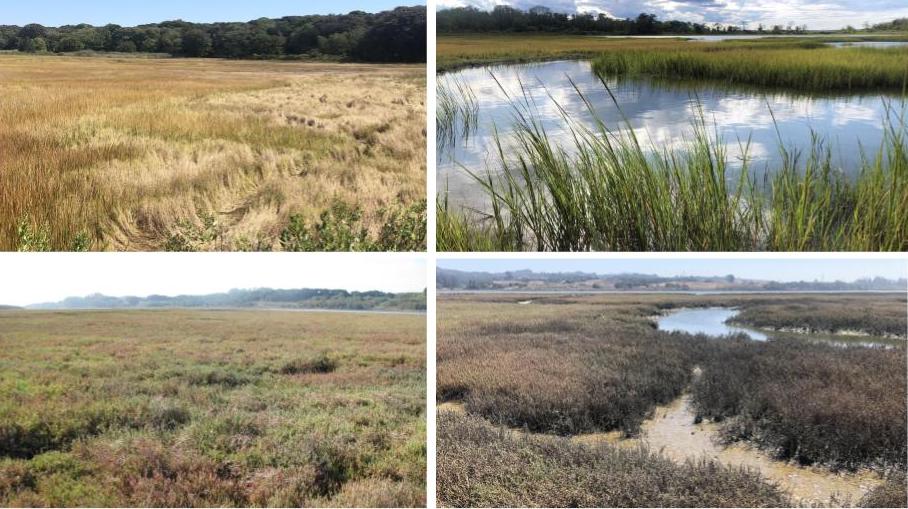 The contrast of healthy marsh and degrading marshes in Narragansett Bay, Rhode Island (top) and on California’s Elkhorn Slough (bottom).

TLP is an emerging strategy to support marsh resilience. 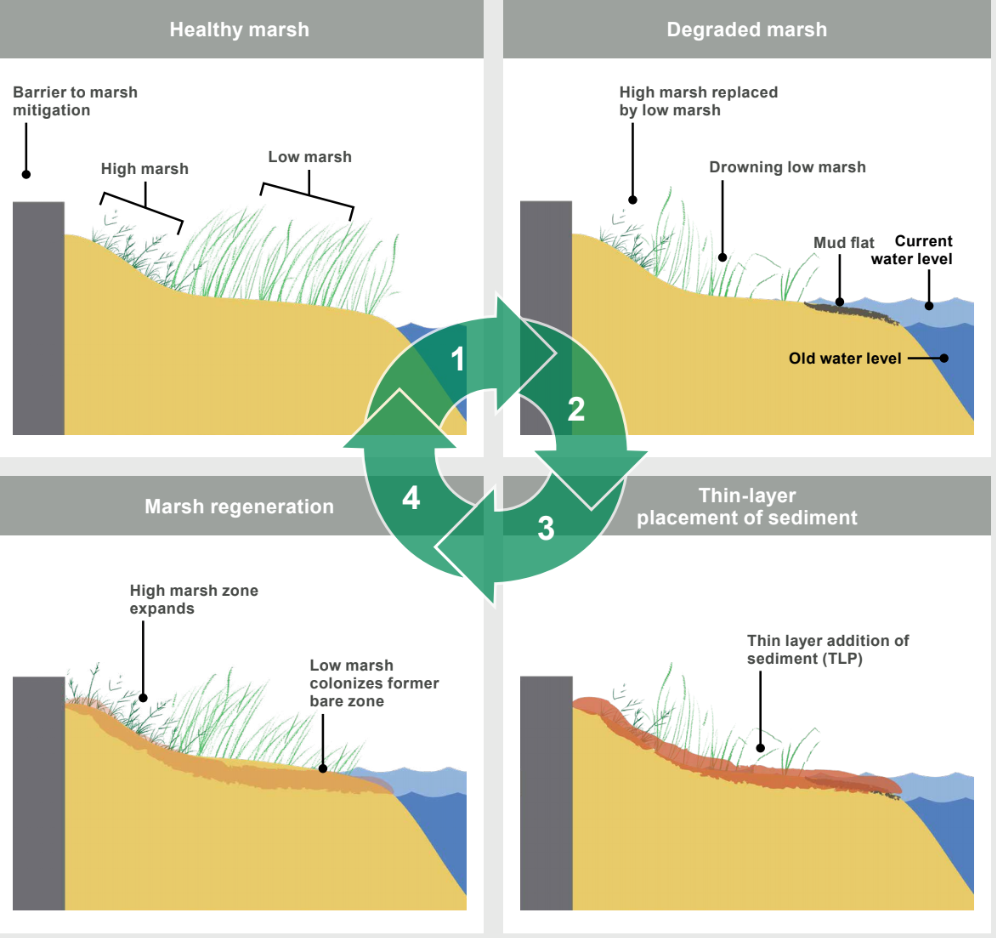 Thin-layer placement of sediment (TLP) is a strategy to restore or maintain a tidal marsh’s elevation relative to sea level.

TLP has been applied in Louisiana for decades and is now being tested in different regions. However, there are few scientific studies on its effectiveness and the factors that influence its success or failure as a marsh preservation strategy.

Together with scientists and coastal managers from across the United States, the NERRS team developed documents to guide future use of TLP: 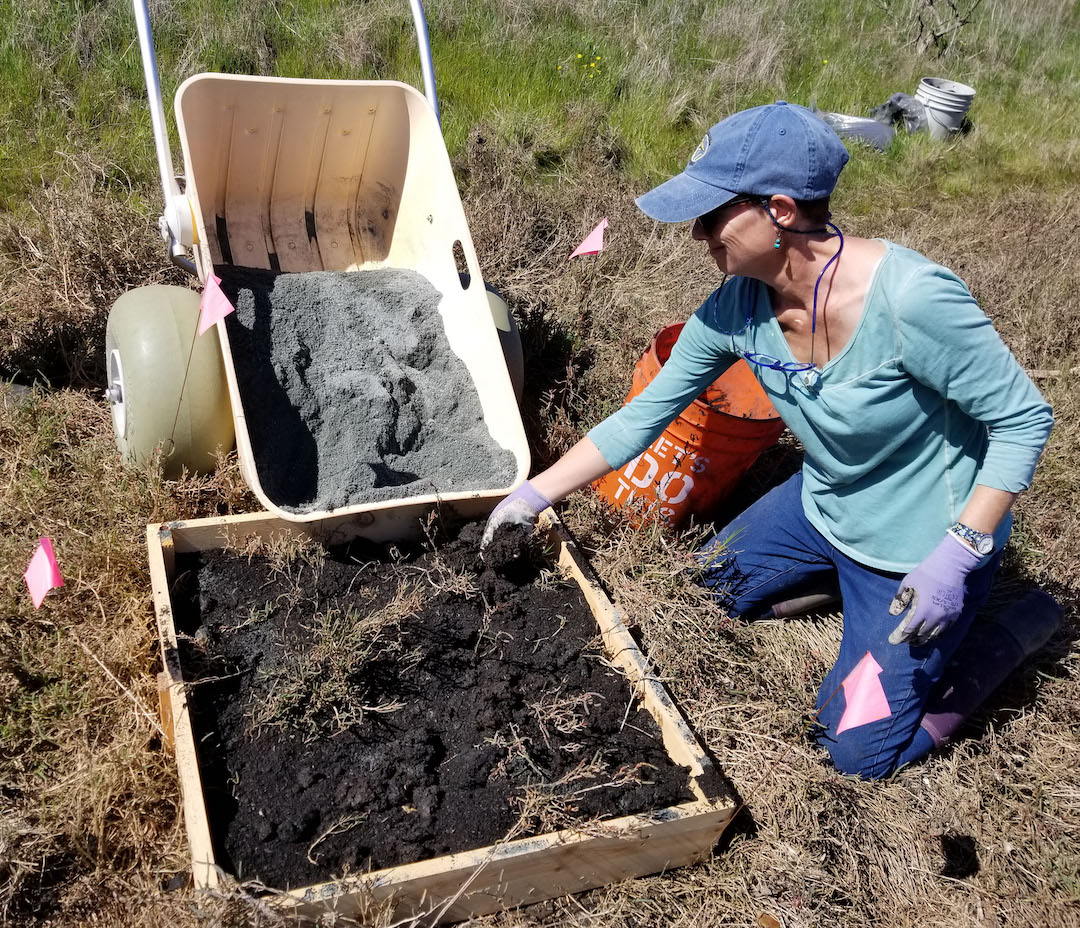 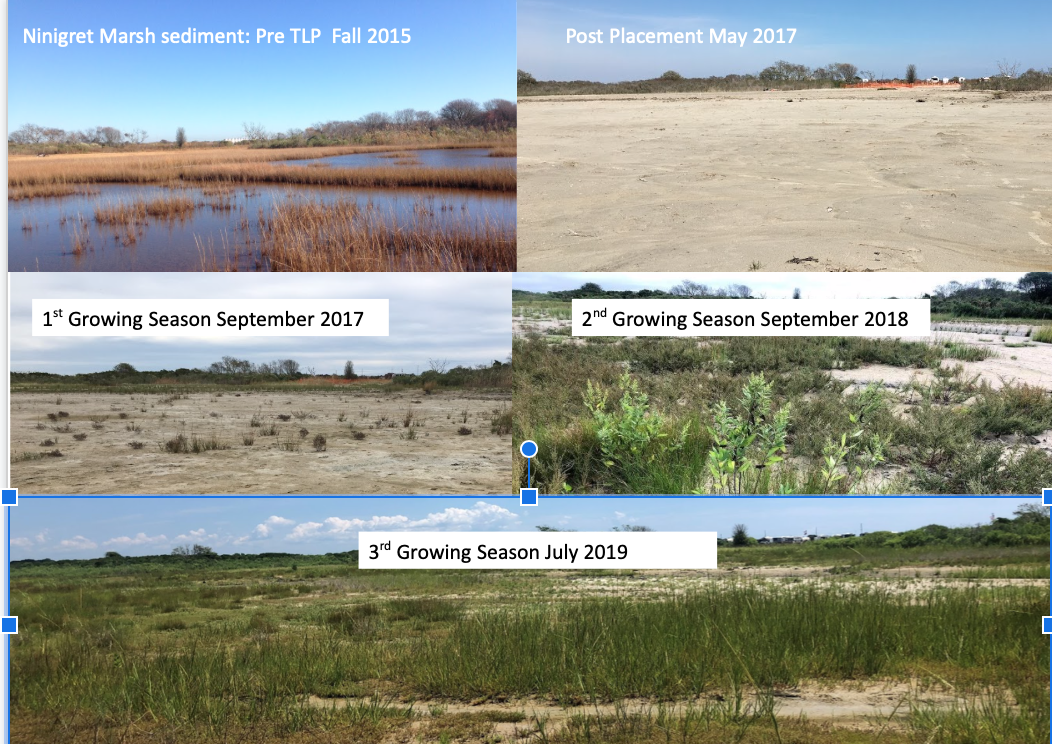 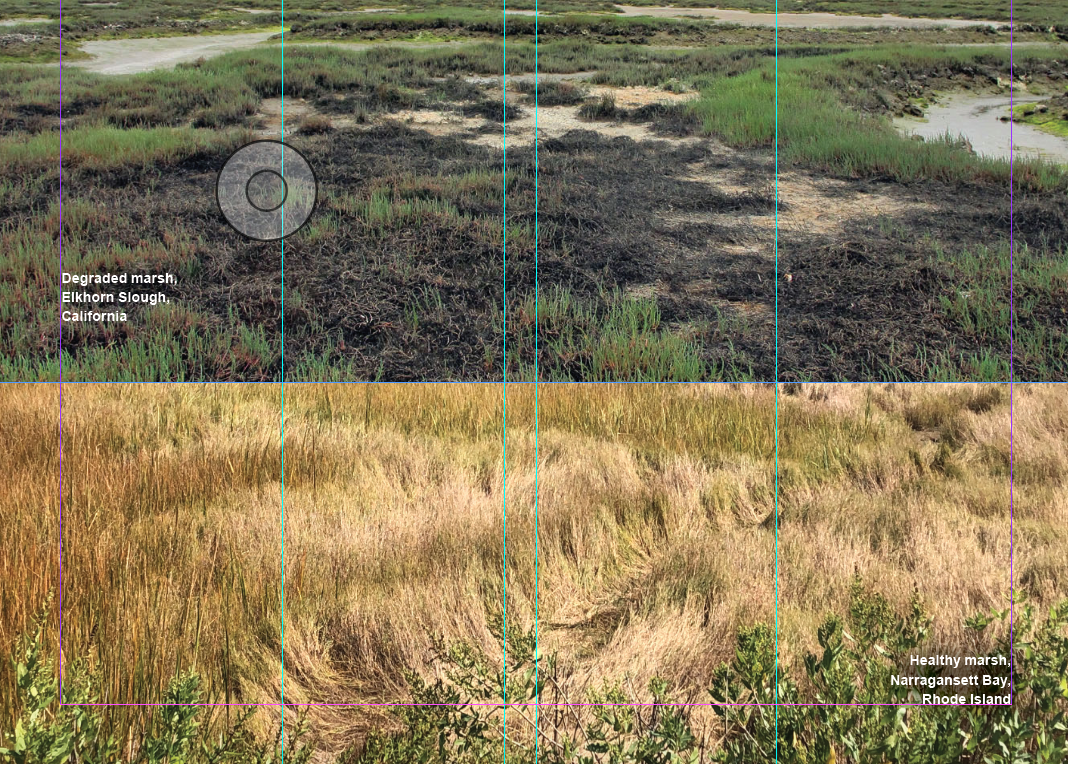 Eight Reserves collaborated to examine TLP as a climate adaptation strategy for at-risk marshes. The team conducted plot-scale studies to evaluate the impact of TLP at different elevations, and tested the use of different sediment thicknesses and compositions. At three Reserves, they also looked at the addition of biochar—plant-based charcoal—to improve soil and plant health.

Findings thus far show that the impacts of TLP vary greatly, with some commonalities. At each site, the sediment addition raised marsh elevation, increased sandiness, and affected soil conditions such as acidity, moisture, and oxygen levels. Vegetation recovered quickly at most sites. Complementary greenhouse experiments conducted by Drexel University revealed that differences in sediment can affect the outcomes of TLP.

NERRS: A national platform for comparative research on marsh resilience

The NERRS collects and shares timely environmental data on how estuaries respond to a changing climate. This long-term national monitoring allows Reserves to function as sentinel sites, providing front-line information on climate change adaptation and other management strategies.

The NERRS also offers a rare national platform to conduct coordinated restoration experiments and analyses across diverse sites and over extended monitoring periods. This capacity is critical to understanding trends in coastal and environmental conditions, and is extremely rare in the field of wetland restoration science.

This research was made possible by sustained congressional investment in the NERRS approach to collaborative science. By engaging local communities in the research process, NERRS collaborative research projects directly address their needs while advancing estuarine science. Through a national network dedicated to sharing tools and knowledge, local research conducted at one Reserve strengthens all 29 sites and the communities they serve.

More information about the NERRS approach to collaborative science is available from the project sponsor, the NERRS Science Collaborative, which is funded by NOAA and managed by the University of Michigan Water Center. Learn more. 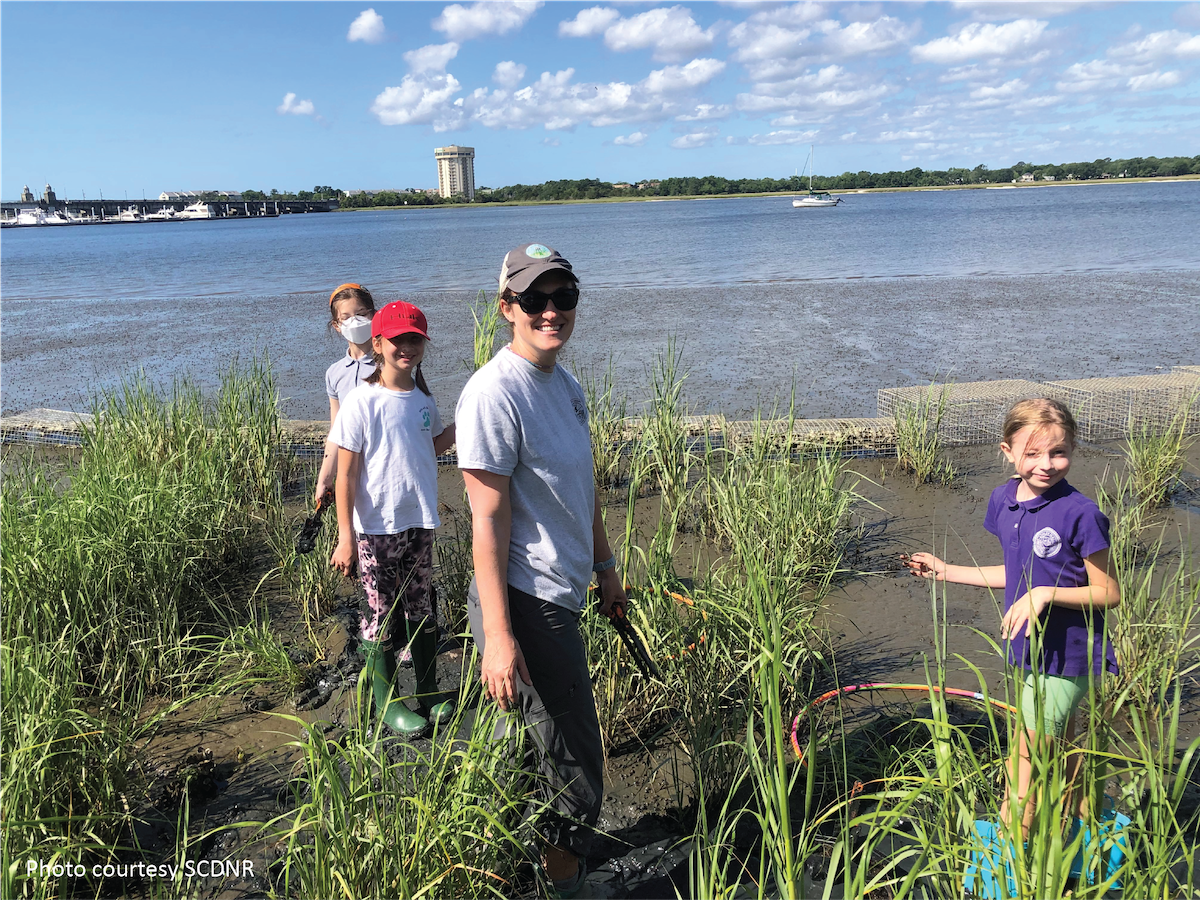 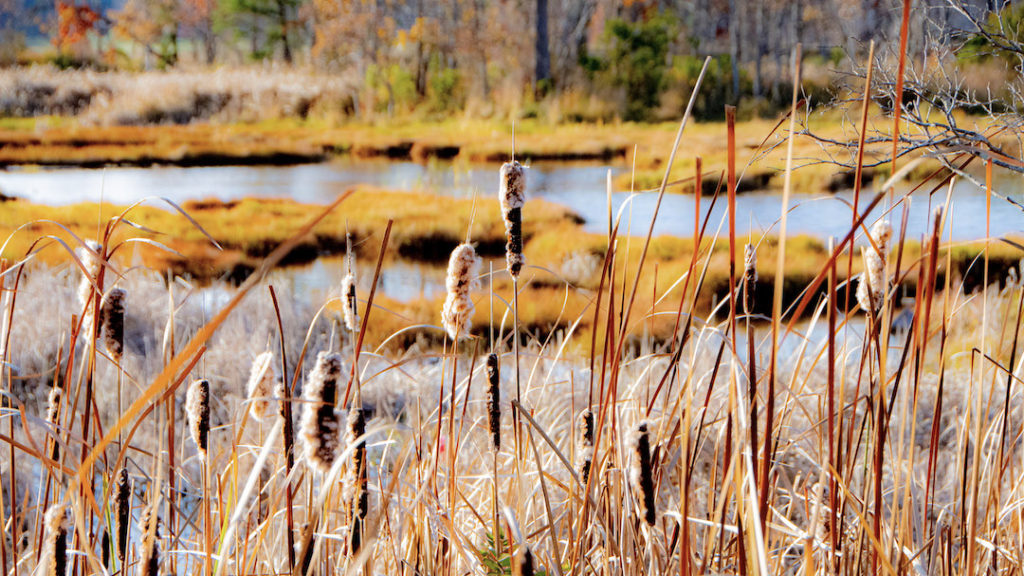