Talk NERRdy to Me: Cory Riley 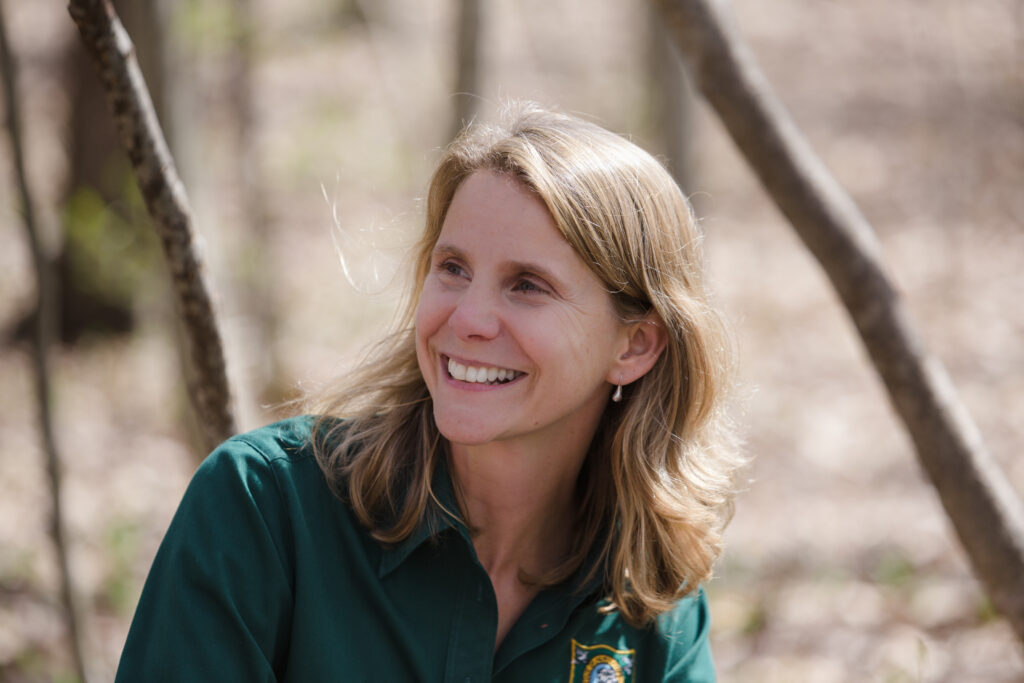 Talk NERRdy to Me is a monthly column about leaders and luminaries from across our 29—soon to be 30—Reserves. This month, NERRA’s correspondent-at-large Nik Charov interviewed the very familiar Cory Riley, manager at New Hampshire’s Great Bay Reserve and past NERRA president. They talked about life stages, the need for friends and constant curiosity, and, naturally, mid-life motorcycles. Photo courtesy of Courtesy Danielle MacInnes.

Nik: We’re talking with Cory Riley today! Who is basically the last person on our list. Summer-brained, we couldn’t think of anybody this month, so we said well, why not Cory?

Nik: You’ve been involved for like 50 years, or at least that’s how it feels. Why “anything for NERRA”? Why is NERRA worth Cory Riley’s time, by this point?

Cory: What!? NERRA does things for the system that nothing else can do. It gives us a collective voice to the Administration and Congress, which is really important because that’s how we get our funding. You need a friend in DC if you want to be a part of the federal budget! So that, number one, is why NERRA is worth all of our time, not just me but anybody who is in the Reserve system. NERRA helps us have a common message and forces us to have a vision.

And I love NERRA because in the last few years it’s really provided a very friendly way for Reserves to talk to each other and celebrate each other’s successes. Also, political winds change, there needs to be somebody who can remind people how awesome the Reserve system is—someday we won’t be so lucky. I love the historical stories about NERRA and why it started.

Nik: What about how you started? Where are you from, Cory Riley?

Cory: I am from Middleton, Massachusetts, north of Boston. Not far from the ocean, loved the beach as a kid.

Nik: What about Middleton and the beaches of Boston’s North Shore was so great?

Cory: I had a best friend in high school who had access to a hunting shack on a little island on Great Marsh. We decided we were going to go out and fix up the shack, and so we spent every weekend cleaning out all the junk, bringing camp chairs out, and hanging out.

Nik: Wait a minute. High schoolers, unsupervised, in a shack in the middle of a marsh?

Cory: I know. I wouldn’t want it to happen within my Reserve boundaries. But it’s what made me realize that I love the smell of salt marsh. We weren’t doing anything nefarious because I was a big, fat nerd in high school.

Nik: So, it wasn’t the “beer bust at the Moon Tower” out there?

Cory: No. I always knew I loved the beach and the coast, but that’s when I really got into salt marshes. I studied biology at William and Mary and I had a professor who also worked at VIMS, which is, you know, where Willy Reay rules.

Nik: Has for 80 years. Retirement coming up, I hear. [Editor’s Note: This is a perverse rumor that starts—and ends—with Nik and has been repeatedly debunked by Dr. Reay.]

Cory: Yeah, yeah. Then… where was I? Peace Corps in Jamaica, where I did environmental education work in an organic garden in a little coastal town. Then I did something not related to the coast for one year, which was also awesome; I worked for a nonprofit with teenagers on the border of Texas and Mexico, training them how to do community service projects in their towns.

THEN I went to grad school to study Coastal and Ocean Science and Policy at UMASS Boston.  They have this research institute there, the Urban Harbors Institute. That’s how I got hooked up with the Reserve system, because I ended up working on a project with Jeff Benoit, who worked for Mass Coastal Zone, then NOAA, then Restore America’s Estuaries. He was behind a project at the time to look at performance metrics. 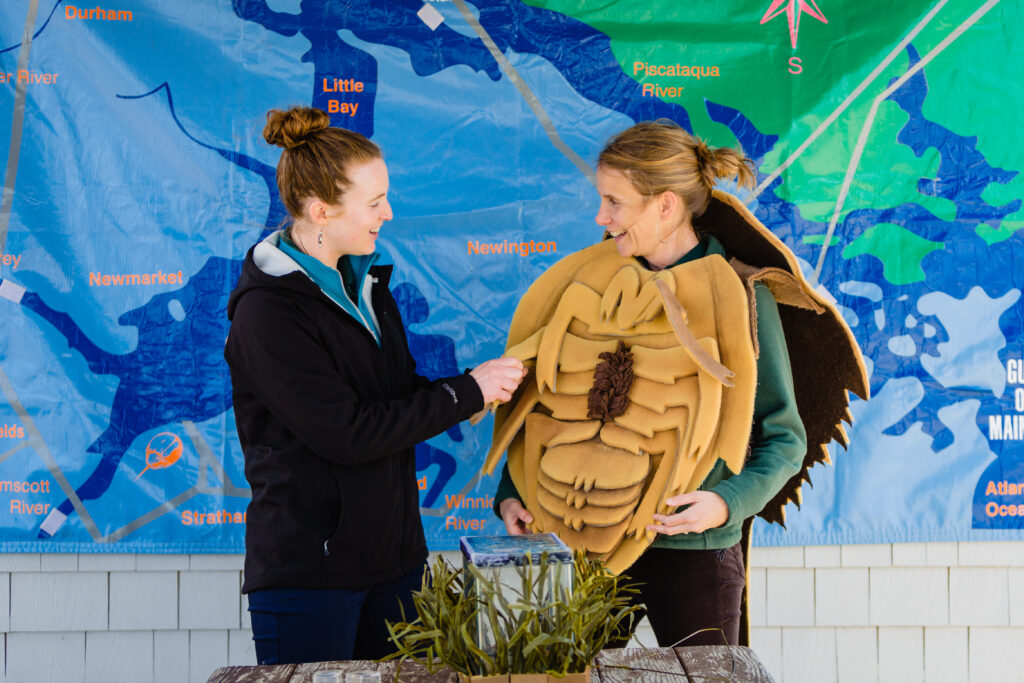 Nik: Oh, so performance metrics are your fault?

Cory: All of it is my fault. And the managers who were around then still blame me. As part of that project, I interviewed Paul Dest and the other New England managers at the time at Waquoit, Narragansett, and Great Bay. At my first interview, I was like “This is amazing! This is kind of what I want to do. I want to be someplace where you can do place-based research and education.” I got hired by NOAA out of grad school. I bopped around with Reserve work and did whatever needed to be done for a long time. It’s been almost 20 years! So I do feel like I know the System really well.

Nik: Where’s the system at by this point, if you had to give it a stage of life? We’re no longer larval.

Cory: (laughs) No, not at all. I think we’re in our mid 20s to mid 30s. For me at that time, it was like every two years, some big decision was happening. You’re going back to school, having a kid, buying a house,  getting a puppy… You were doing new things and taking on new responsibilities and learning things at an incredible rate. So I think that’s where I see the Reserve System now. We’re mature enough to be directing our own destiny, but we’re still moving at an exciting clip.

Nik: We haven’t hit the midlife crisis yet.

Cory: Right. I can’t wait to see what kind of motorcycle we buy when we do.

Nik: Do you think we would have a midlife crisis? Or do you think our System is like one of those lucky people that just keeps getting better as a person. Not that I know anybody like that.

Cory: I think the people who do keep getting better are willing to embrace their mistakes and successes. They put their ego aside and are always taking a fresh look at the world. They aren’t afraid of a challenge or something that threatens their worldview. So I hope the Reserves can be like that.

If there’s anything we know about the coast is that it’s always changing. And I think that if the Reserves stay nimble, they will remain the sanctuaries that they are. In the last six years especially, Reserves have really embraced the place-based part of our mission. And I do think that’s what makes us special and is gonna make us relevant in the long term.

Nik: What does “place-based” mean to you?

Cory: To me, a place is the thing you fall in love with. You can’t fall in love with a concept, you know. You’ve got to see it and touch it and smell it. We get people hooked on science, on ecology, on stewarding the coast. We show them what it really looks like—this is erosion, this is what marsh deterioration or flooding looks like. To fall in love and have your heart broken is what being place-based means.

Nik: Someone should write an 80s rock song about us. What’s going on at Great Bay lately? Didn’t you just inherit a farm?

Cory: Oh yeah. The farm has been a real handful, but it’s also stunningly beautiful and I cannot wait to connect people to Great Bay there. It also has a really interesting history that we’re learning a lot about. You sit at a coastal farm yourself at Wells! It’s fun to interpret history.

Nik: When you go place-based, there’s that history that’s straight behind you every single day.

Cory: Yup. We do that at the Hugh Gregg Discovery Center. All of our fall field trips interpret how people have interacted with Great Bay, from Native American times to today. We’re making the farmhouse into housing for visiting researchers. And then we’re going to build a big picnic pavilion to create an amazing space for people to go, and we’re partnering with other parts of our agency to restore the boat launch that’s there.

Cory: Yes. I love being a part of Fish & Game because we have similar missions—to protect and steward the state’s natural resources and to connect people to those resources. All of our lands are open to hunting and fishing.

Nik: Everything sounds really well functioning. So why do you need the Great Bay Stewards?

Cory: They are part of our birth story. The Great Bay Reserve was created when Aristotle Onassis wanted to build the country’s largest oil refinery here in Great Bay,  and a group of citizens came together and stopped that. That group morphed into the Great Bay Stewards once the Great Bay NERR was up and running. They have been invaluable because even though we are supported by NH Fish & Game, we are a self-funded agency, so all of our state match comes from hunting and fishing licenses, which is a challenge.

The Stewards provide all kinds of amazing project specific support. They also serve as fiscal agents for external funding, so they provide that essential role, which NERRA and the Laudholm Trust at Wells do too. It’s not glamorous but it’s very important. They’re also our citizen advocates for Great Bay and the community and carry our mission forward in different circles—as community leaders, as people who are engaged in their town. They’re an amazing group, we’re very lucky to have them.

Nik: I feel that Wells is very lucky to have its friends group, as well. You like the give-and-take. Who’s your favorite giver-and-taker in the Reserve system? Somebody the three people who read this every month will now.

Cory: I like to argue with you. As far as give and take, where you sit down and argue over beers? North Inlet-Winyah Bay’s Eric Smith is a good one.

Nik: Something this important can’t be left to the Eric Smiths. …hey, come to think of it, there are so many new people in the system lately!

Cory: I think that’s great. It’s a sign that the Reserve system is becoming this professional organization, where hotshot people come and work for five years and then go somewhere else. This has its pros and cons, but I do feel like we’re really contributing to the next generation of amazing people—you have to let people go to know that we’re influencing the world.

Nik: It feels to me like more people have just retired, and the new people coming in are young and exciting and diverse and really prepared… You talk to the Davidson fellows and they sound just like you, except they’re, like, 19!

Cory: Oh my gosh, yeah. I’m ready to give my job to Anna Lowein, the Davidson fellow who works at Great Bay right now. She’s such a rock star.

Nik: I think we all just need to quit and give it to them, and see what happens. I think that’s the next stage in NERRS development.

Cory: I’ve thought about that a lot lately. Am I becoming a stale voice in this community? At what point do you say ‘I should show myself the door?’ How do I productively challenge myself? How do I need to light my fire to have a totally different perspective on the Reserve system?

Nik: I think you should get a motorcycle.