Talk Nurdle to Me: Jace Tunnell

Jun 23, 2020 | Healthy Habitats, Mission-Aransas, Texas, Reserves, Talk NERRdy to Me, What We Work For 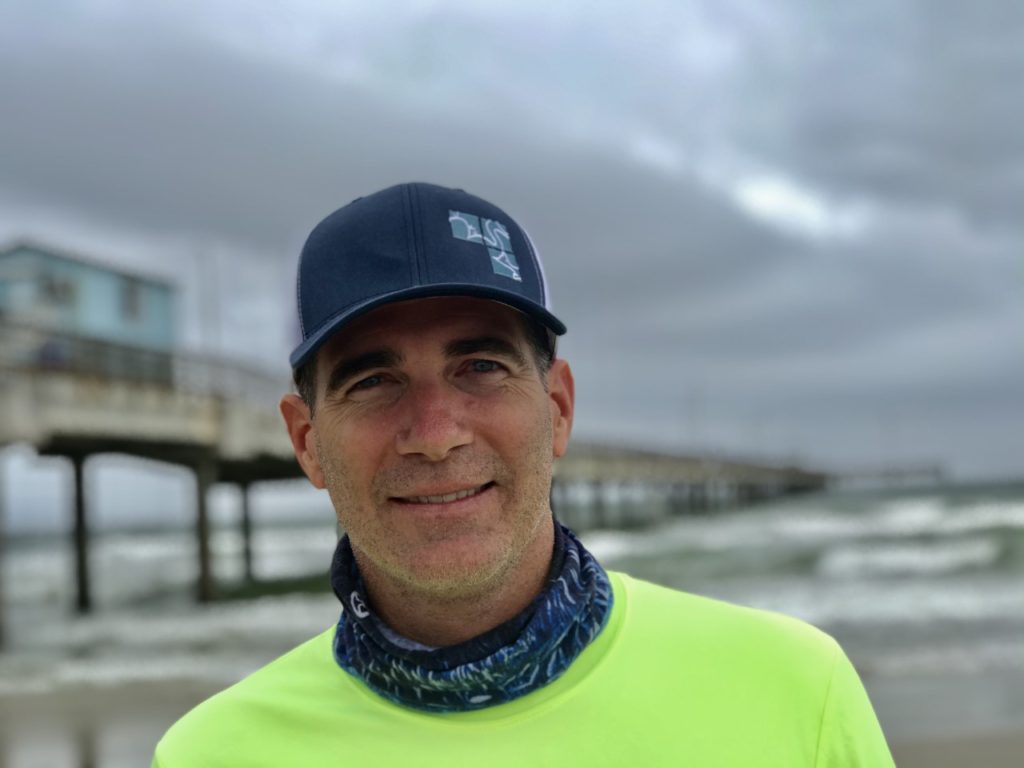 Jace Tunnell is NERRDy about Nurdles. Talk NERRdy to Me is a column about leaders and luminaries from across our 29 reserves. This month, NERRA’s Maine correspondent, Nik Charov caught up with Jace Tunnel, manager of Texas’ Mission-Aransas Reserve and the Martin Scorsese, Steven Spielberg, and George Lucas of the NERRS—all wrapped up into a really nice guy.

Nik: Tell me about the manager role. Do you actually know what you’re doing?

Jace: I’m not sure any of us managers do, haha. A lot of it is what you’d imagine: writing grants, doing budgets… no fun stuff. If you write yourself into a grant with fieldwork, that’s your excuse to go outside.

Nik: So when we see you out on the beach, you’re actually working, not just fooling around with your GoPro?

Jace: Every once in a while.

Nik: Tell me about the Amos Rehabilitation Keep (ARK). Is it some kind of fortress?

Jace: The ARK was started in 1982 by Tony Amos to rehabilitate coastal animals and birds. The first year they had seven animals; last year we had more than 1,500. I don’t know of another Reserve with a rehab facility, so that’s a unique feature at Mission-Aransas. A lot of the funding comes from community donations and a large grant from the BP oil spill.

Jace: That happened in 2010. We actually never had oil on our beach, so a lot of people ask me why we got money. But if you look at sea turtles and migratory birds, they were impacted, and those animals do come to Texas.

Nik: They bring the oil to you?

Jace: Yeah, indirectly. Our main job at the ARK is to get these turtles in, find out what’s wrong with them, and get them back out there. So we help to reestablish what was lost in the spill.

Nik: So much of your recent work has become about plastic pollution. How do you square that with this massive Texas petrochemical industry you’re surrounded by?

Nurdles, which are the raw material for everything plastic, spill when manufacturers load them for transport and during transport. When it rains, they get into the stormwater and go out to sea.

The upcoming Texas Nurdle Bill legislation is going to try to make some mandatory changes to stormwater permitting. In Texas and most other states, plastics manufacturers are allowed to spill a “trace amount” of “suspended solids.” This bill wants to replace that language with “zero discharge of plastic pellets.” That would be huge.

Nik: What do you have against nurdles?

Jace: As with all plastic, wildlife swallow them. There’s chemicals and additives in them, and the longer they’re in the environment, the more chemicals they absorb. There’s no nutritional value, and if birds eat enough of them, they clog the intestinal tract. Fish experience behavioral changes, and we don’t know yet if those chemicals leach into the muscle tissue of fish that we’re eating. 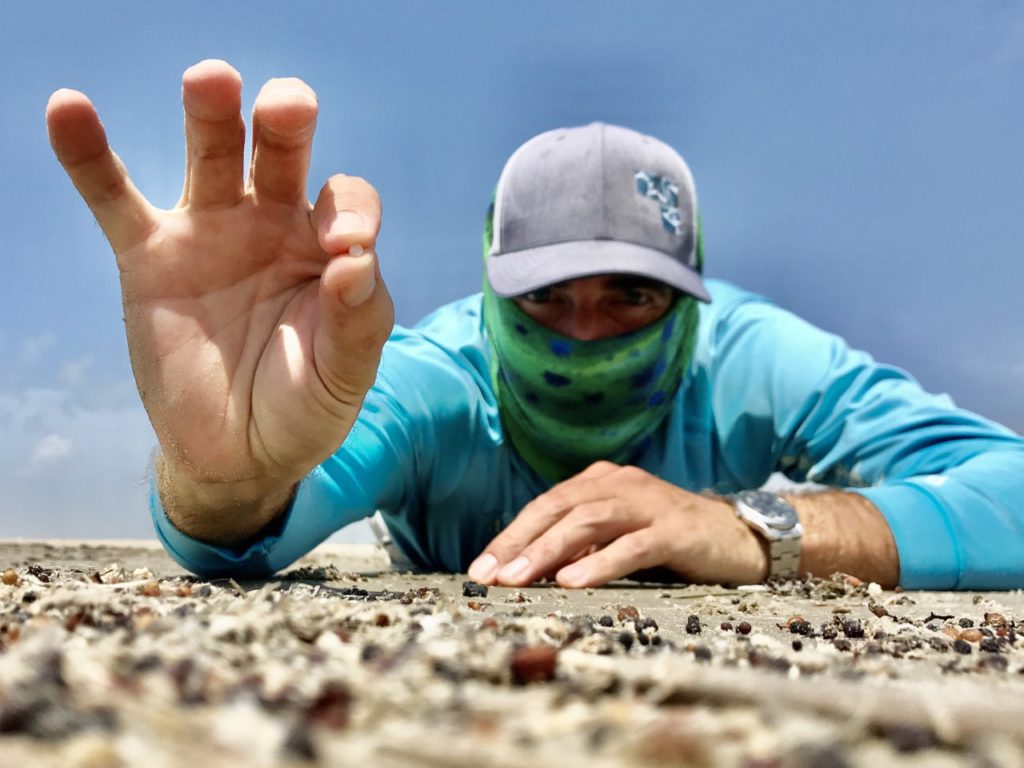 Jace Tunnel shows off a nurdle—a raw plastic pellet—found on a Texas beach.

Jace: Yeah, Formosa Plastics was found guilty of discharging these pellets. They settled for $50 million, and Nurdle Patrol got $1 million. We’re going to use the money to host a Texas Plastic Pollution Symposium and to expand the patrol. We’re making kits for organizations that want to start their own patrols. They can put their data into nurdlepatrol.org, see what their community looks like, and take that to local representatives, political leaders, and state agencies. We’re making good improvements, including videos to help get people more active.

Nik: I knew you were going to budget yourself more filmmaking time. Jace Tunnell is the Martin Scorsese, Steven Spielberg, and George Lucas of the Reserve System all rolled into one.

Jace: Videos were cool before, but videos are really cool now that everyone’s stuck in the house. We’ve been trying to reach people who are not able to make it to the beach with a series called Beachcombing.

Nik: You’ve also got a series on your volunteers, including Tony Amos. Seems like he was a really important figure for you guys and the area. What would he have thought of finally getting a handle on the nurdle problem?

Jace: Early in the 1970s, Tony started doing his beach surveys every other day. He was counting all the trash and where it came from, every other day for 40 years. So I think he’d be really behind the whole nurdle thing 100%. If zero pellet loss can be done in Texas, it can be done anywhere, right?

Nik: I’m sensing some enthusiasm. Why’d you get into this work? Why the coasts? Why clean water and animals and estuaries?

Jace: My dad was a marine biologist at Texas A&M University-Corpus Christi. So I just grew up at the beach all the time doing bird surveys and looking up shells and looking at oil spills.

Nik: So… you don’t know how to do anything else?

Jace: It’s all I know! Actually, I went into journalism. I was going to be a writer. But then I went into the science field and never looked back.

Nik: What’s your favorite part of the job?

Jace: Getting to be on the beach. Now what’s my least favorite? Can you guess?

Nik: Sitting in the office?

Nik: You like everything. What’s next for you guys?

Jace: Nurdle Patrol is a big deal. We’ve got 29 partners now. We just announced an international partner over in Scotland. We’re also doing our 312 evaluation and our management plan. I mean, who doesn’t like that?

Nik: Yeah, but you get to do it all remotely! It’s much easier.

Jace: Yeah! We’re really trying to expand our reach. We’ve done a lot of work within our boundary, but we’re seeing that we can have a huge impact outside our boundary and even into other states, so we’re working towards that. 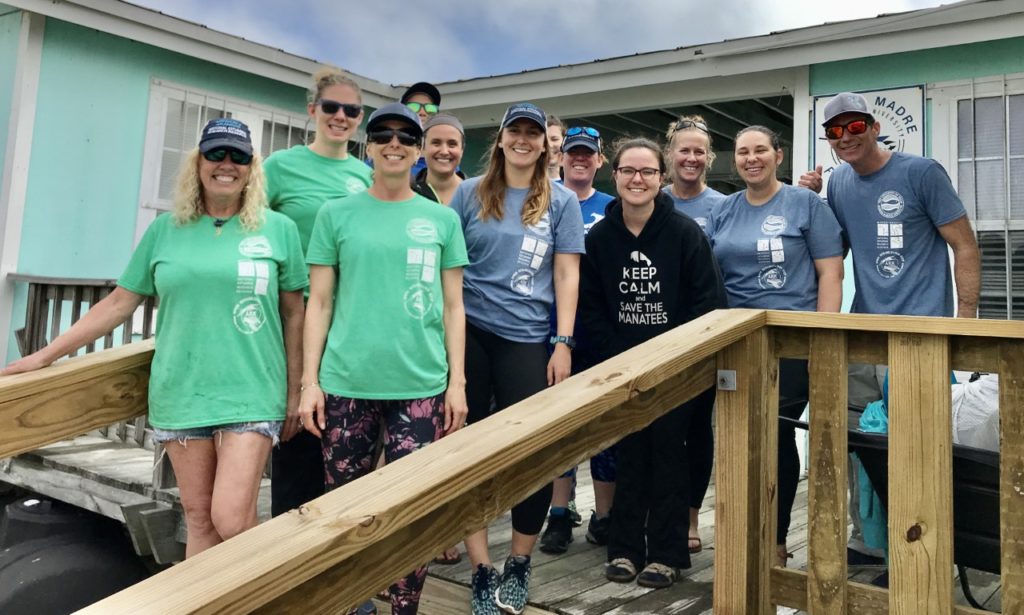 Share This
What We Work ForHealthy HabitatsTalk Nurdle to Me: Jace Tunnell