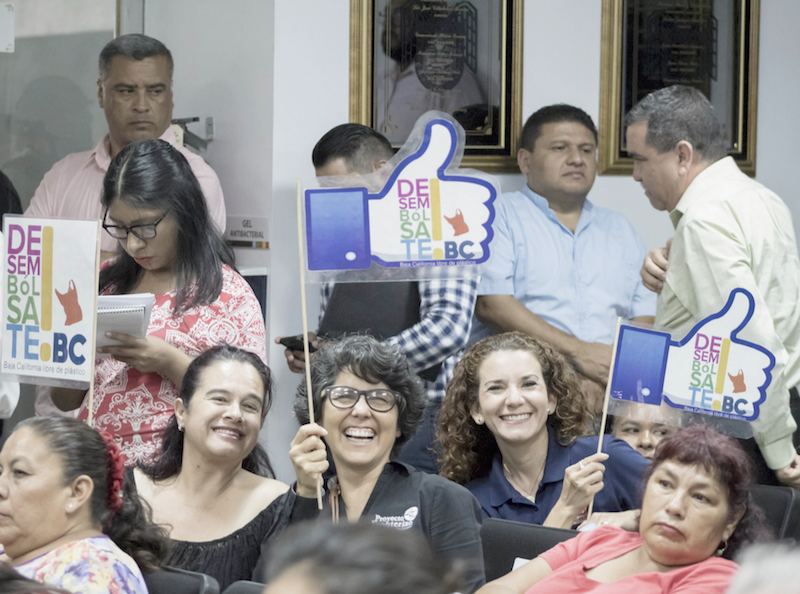 “We are gathering more and more evidence about the impact of plastic on the lives of people who live in Tijuana’s urban canyons,” says Kristen Goodrich, the Tijuana Reserve’s Coastal Training Program Coordinator. “We are thrilled to see such leadership taken by the City and will be exploring ways to measure the impact of the ban.”

The training and technical assistance needed to get decision makers to understand the impact of plastics and marine debris was conducted by the Reserve’s Bi-national Liaison Ana Eguiarte, who developed the Desembolsate BC campaign.

Translated as “Baja California: Get Rid of Your Bags,” this campaign is designed to influence consumers to reduce their use of plastic bags. A related pilot project trained convenience store employees to collect data related to the number of bags that customers use. Efforts are underway to work with partners to replicate the project in other areas, such as Tecate, as well as provide training and technical assistance to government officials.

The Reserve’s efforts build on a bi-national project to control solid waste that enters into the Tijuana River Estuary. The project is part of the Border 2020 Program and is financed by the U.S. Environmental Protection Agency’s North American Development Bank and is built upon  four years of work with support from National Oceanic and Atmospheric Administration’s Marine Debris program.

“From California to the Gulf of Mexico to the East Coast, reducing plastic and other marine debris is a focus for all of our Reserves,” observes Rebecca Roth, director of the National Estuarine Research Reserve Association. “Pollution does not respect political boundaries. That’s one reason our Reserves work across community, state, and national borders to protect people and places.”

Share This
What We Work ForHealthy HabitatsTijuana Bans Plastic Bags