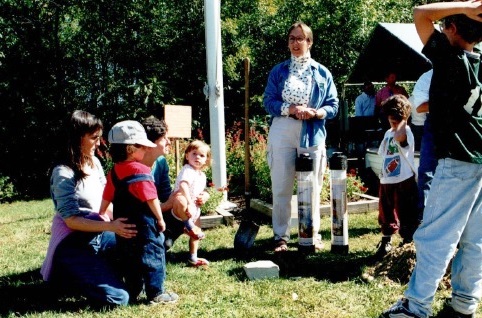 This vintage pic shows the burial of a time capsule at Great Bay Reserve in October of 1999—the capsule was unearthed this year as part of GBNERR’s 30th anniversary celebration!

The Great Bay Reserve turns 30 this year! To celebrate, staff and visitors unearthed a piece of Great Bay history during Estuaries Week—a time capsule from October of 1999. Inside was a roster of people who attended the ceremony, along with wishes for the future of Great Bay.

The wishes were made by children who were fifth-graders in 1999. Many aligned GBNERR’s work to reduce pollution and preserve wildlife. Others are a bit harder to manage, such as 9-year-old Leah’s wish to find the Loch Ness Monster in Great Bay. (Leah, we promise if we find it, you’ll be the first to know!)

As part of the day’s celebrations, a new time capsule was buried that will be opened in 2039 for the Reserve’s 50th anniversary. Local third-graders added their wishes for the future of Great Bay to the new capsule.

Designated in 1989, the Great Bay Reserve has its roots in a group of environmental activists who mobilized to prevent the building of an oil refinery on the bay and protect the vital habitats the Reserve now conserves. It is host to a wide range of species, from oysters, lobsters, striped bass, and horseshoe crabs to migratory osprey and annually-spawning river herring.

“Our true legacy is a protected place on Great Bay that belongs to our communities,” says Cory Riley, Reserve Manager. “We all need for a place to go—to witness an eagle and osprey fight over a fish, to feel the mud between our toes, to start a journey by kayak or by intellectual curiosity. The Great Bay will always be here for that.”

One of the strengths of Great Bay Reserve is its strong investment in the future, including seeing our estuary through the eyes of children. We can’t wait to see what their wishes hold for the future!