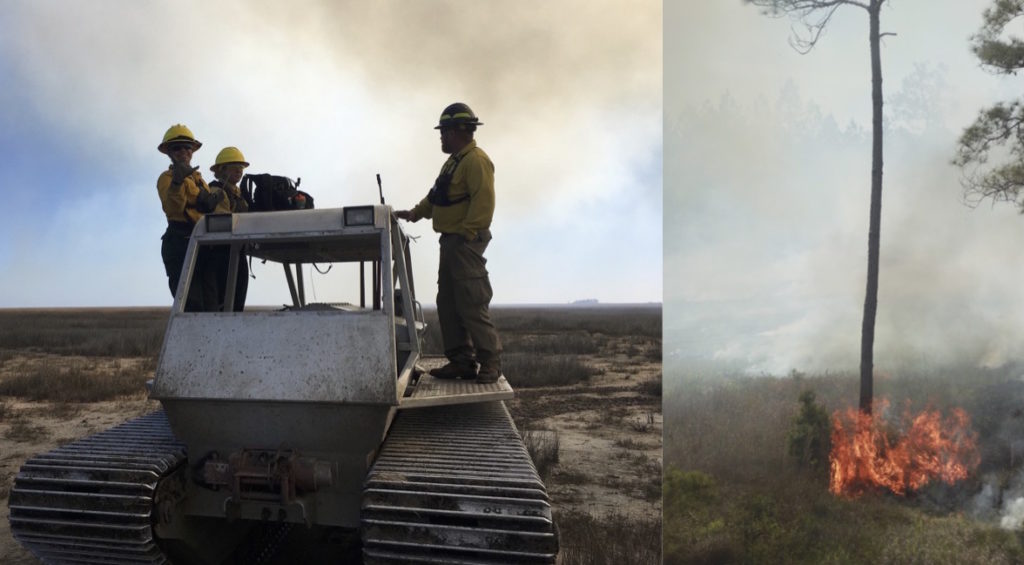 From left: Rebecca Weaver and Mandi Wilson of the Veterans Fire Corps with Bill Olive from the Southeast Louisiana National Wildlife Refuges Complex at Grand Bay. Photos courtesy of the Grand Bay Reserve.
According to a study by the Civic Enterprise Institute, more than ninety percent of returning, post 9/11 veterans want to continue to serve in some way and doing so can ease the transition to civilian life. This dedication to service was evident when the Veteran Fire Corps came to support prescribed burns at the Grand Bay Reserve the past spring. The Corps provides veterans with job training in wildland fire mitigation and conservation. With local wildland fires suppressed by development, Grand Bay staff and their partners were happy to have the veterans’ support.

“Some of the National Wildlife Refuge land around the Grand Bay Coastal Resources Center hasn’t been burned in a long time,” says Sandra Huynh, Grand Bay’s director’s assistant. “The veterans have been awesome—energetic and fully able to do this kind of work. They are the kind of volunteers you can rely on.”

The long-term management goal is to restore Grand Bay to its historic condition of being an open longleaf pine savanna with a diverse plant community. This requires repeated fires over a long period of time to open up the understory and encourage growth of warm season grasses and other plants. A grant-sponsored partnership between the U.S. Fish and Wildlife Sandhill Crane National Wildlife Refuge, Wildlife Mississippi,  Student Conservation Association, and the Grand Bay Reserve was able to focus the Corp’s energy on this challenging goal. 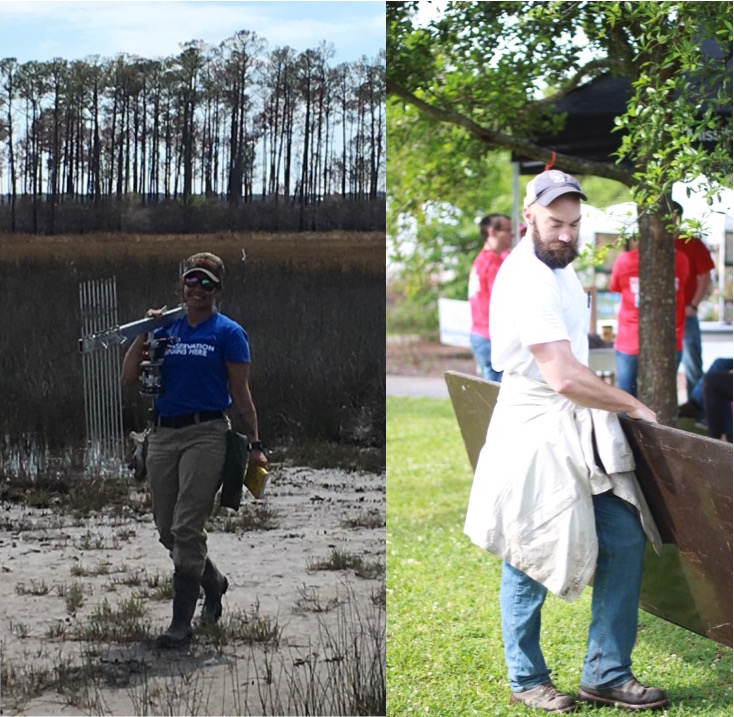 Alongside support for burns, Corps members helped Reserve staff with many tasks, from helping with SET data collection (Rebecca Weaver) to setting up the Celebrate the Gulf festival (Phil Collier).
The veterans were literally “thrown into the fire” almost as soon as they arrived. They took up residence in the Reserve’s dormitories and soon became invaluable members of the Grand Bay crew by assisting with burns and other conservation activities, including mapping, repairing boardwalks used for salt marsh monitoring, collecting marsh elevation data, picking up debris, helping out at the Gulf Marine Education Festival, and a lot of chain sawing.

“It is not glamorous work, but it is another tool we use to open up the landscape, and each crew member was moving on to a job where chainsaw skills were needed,” observes Jonathan Pitchford, Grand Bay’s stewardship coordinator. “Of course, we also hope that they walked away with a better understanding of why they were doing the work and thinking about other conservation avenues they could explore.”

In all, the Corps helped burned a total of 873 acres at Grand Bay this past year. Reserve staff and their partners broke up the work with discussions of the management goals for the activity at hand, helped familiarize veterans with the local plants and animals, and talked to them about research and monitoring. 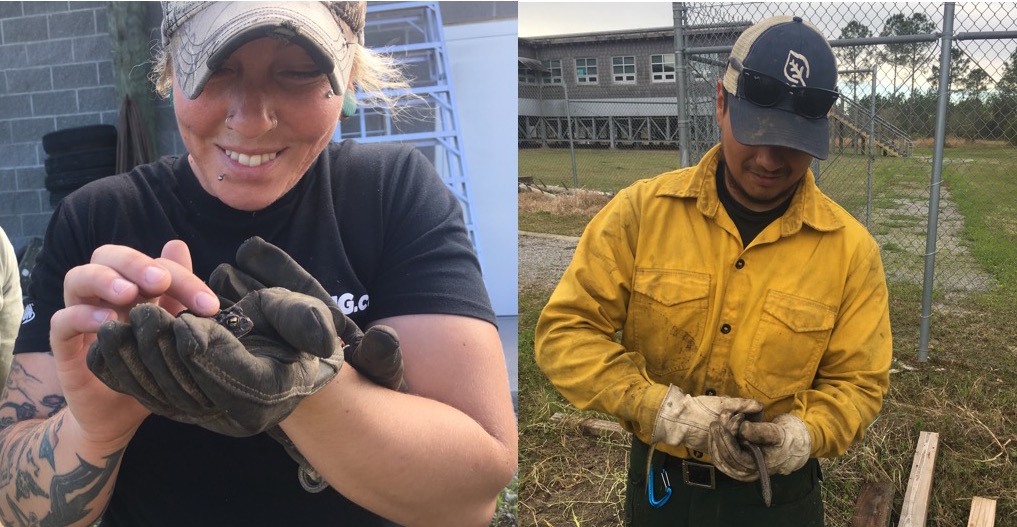 Veteran Fire Corps members Adam Arenas and Mandi Wilson take time out to get to know the local fauna.