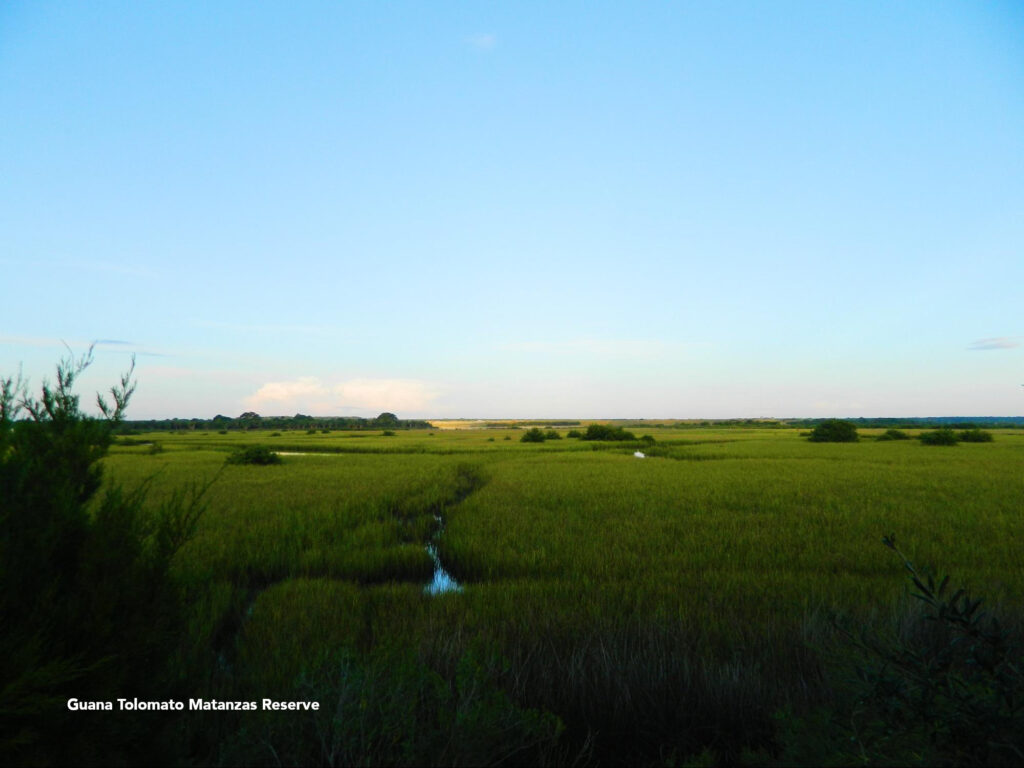 A salt marsh in Florida’s GTM Reserve—a place rich in cultural as well as ecological history. Photo and story courtesy of Ellen Leroy-Reed, director of the Friends of the GTM Reserve, originally published in the Fall 2020 edition of the Estuary Examiner.

Looking out onto the peninsula, I see figures carrying baskets brimming with indigo cuttings. Small silhouettes bend to gather clippings, while taller ones heft bulky loads above them. I spot the disparate shape of structures amongst the verdure and inhale the tang of caustic dyes steeping within them. I hear both the soft murmurs and discordant shouts from distant voices, but cannot make out the words. Do I hear a song, or is it the tonal clippings of a spoken language I do not understand?

For nearly five years, I have worked as the executive director of the Friends of the GTM Reserve. Less than a handful of yards from my office window is the Guana Dam, location of the Florida Historical Marker for Governor Grant’s Plantation. It reads, in part:

“In 1768, James Grant (1720–1806) Governor of British East Florida from 1763–1773, established Grant’s Villa Plantation at the juncture of the Guana and North rivers. Enslaved Africans cleared the 1,450-acre tract of land, planted indigo seeds, and processed the plants into blue indigo dye.”

Until recently, my kinship to this story has been by way of a loose connection through my Caucasian heritage. My ancestors come to America by way of Ireland, Scotland, England, and assorted countries—just like so many of the U.S. population. It was in August of this year that the sign became a catalyst for me, and it had nothing to do with Governor Grant, Europe, or even indigo.

During the summer of 2020, I watched as issues of inequality were exposed in real-time. I sensed fear, frustration, and exhaustion among those close to me who had suffered under its oppressive weight. This unrest prompted difficult conversations as I learned about disparities I never knew existed. Even after spending the last two years working on the GTM for All initiative, I realized I had more to learn about inequality and more to do.

But for all the good work that has been done to create an inclusive space at the Reserve, had we done enough to cultivate a welcoming environment for underrepresented populations? According to a National Park Service survey in 2014, out of the 292.8 million visitors to its parks, only 22% identified as minorities. Our anecdotal knowledge of GTM visitation demographics would likely align with their figures.

We had work to do. If we wanted to forge a connection between the Reserve and underrepresented populations of visitors, we had to learn how to interpret GTM’s unique culture and history… which brings me back to Grant’s sign. What of the enslaved people who lived and worked on the Guana peninsula? What can we learn from history’s complexity? How can we connect through knowledge and understanding?

I pored through books, manuscripts, and photos, stopping on occasion to share some factoid I had discovered, usually with the frenzied zeal of a child retelling a story to a parent. There were letters with the names of men, women, and children who were brought to the peninsula by way of South Carolina and before that, the Transatlantic slave trade. Among them were members of the Gullah Geechee people, descended from West Africans. They brought with them expertise in rice and indigo farming, along with a rich heritage of art, language, cuisine, and expression. Looking at photos, I saw the faces of strong people who endured brutal conditions while creating a culture built on faith, family, and hope.

This is how I came to love the history of Guana, and how I came to view the landscape around me with a new perspective. I may not be able to see myself in the Gullah Geechee people, but I honor them. I see the richness in their arts and expression and honor their contributions and sacrifice. I see the complexity of prejudice in our past and honor the hope of equity for all in our future.