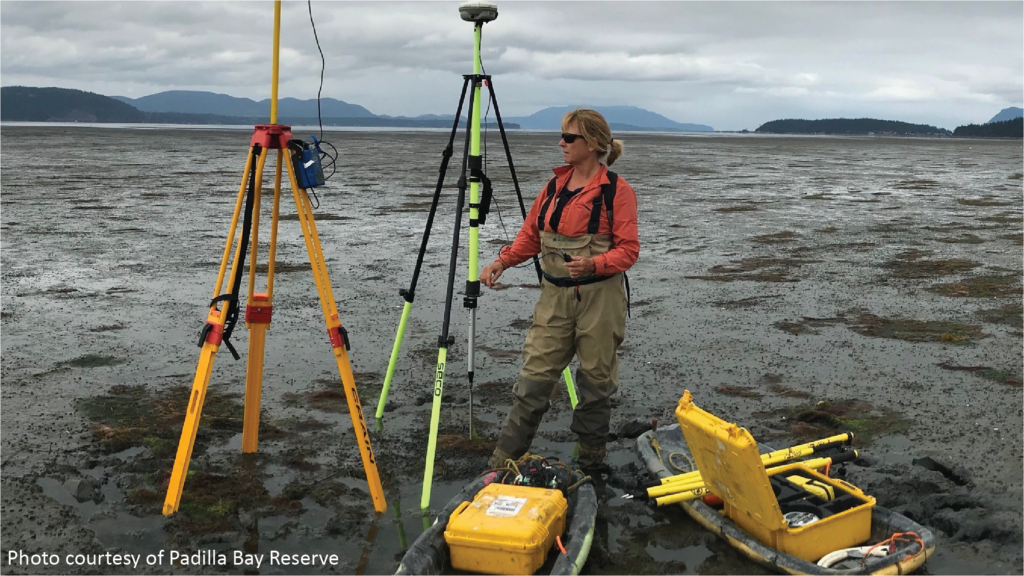 Talk NERRdy to Me is a monthly column about leaders and luminaries from across our 29—soon to be 30—Reserves. This month, NERRA’s correspondent-at-large Nik Charov interviewed Suzanne Shull, GIS specialist at Washington’s Padilla Bay Reserve. They talked about spaces, places, and ground truthing everything from eelgrass to David Bowie’s nudibranch-forward fashion sense.

Nik: Suzanne Shull, you’ve been at Padilla Bay since 1997, which is longer than most of the Davidson Fellows have been alive. What do you do there, and why do you do it?

Suzanne: I’m a Geospatial Information System (GIS) specialist. I get to work in the sciences, do a lot of different kinds of hands-on work while also bringing GIS technical skills. It’s allowed me to help scientists understand the value of GIS and implement it. GIS is technically all about what’s where; everything we do has a spatial component to it. Every spreadsheet you’ve ever used could be translated into a GIS beta layer.

Nik: “A lot” of scientists [Editor’s Note: n=29, CV>=1] read this monthly newsletter. What sells them on GIS? What are some things that they might want that GIS provides?

Suzanne: Well, habitat maps, for example. That’s not something you just hand off to somebody outside of the Reserves and say, “Make me a map.” You’ve got to know the habitats and what it is you’re after.

Nik: This is a relatively new specialty, right? I mean, we’ve been making maps since forever. Aerial photography originally by planes and guys out on the wing with a flash and a hood, right?

Suzanne: And hot air balloons! Yeah, it’s been around for a long time, but it’s become more accessible. Doug Bulthuis was the Research Coordinator at Padilla Bay until he handed the reins off to Jude [Apple]. In 1989 he mapped from aerial photography onto a topographic sheet, just using a zoom transfer scope, and then that was translated to a GIS much later. And that’s really how I got started.

I went to graduate school here in Western Washington University and worked on hyperspectral imagery from our state Department of Natural Resources to map nearshore vegetation. They handed that imagery off to me and said, “We’d like you to make a map of Padilla Bay so that we can compare our results,” and the rest is history! When I finished that master’s program, I got hired at Padilla Bay to set up the GIS and here I am. We still have aerial photography flown every year—we don’t always map from it, but we have this record where just by looking at the imagery you can see whether or not that subtidal edge is stable, for instance.

Nik: I’m going to cut to the chase and ask: has Padilla Bay changed?

Suzanne: I’d say we have more distribution of the eelgrass than we did. But one of the problems for remote sensing is getting at the species differentiation. We’ve got two species (at least) — an introduced species and a native species, and they grow intermixed so you can’t do it without ground truthing. 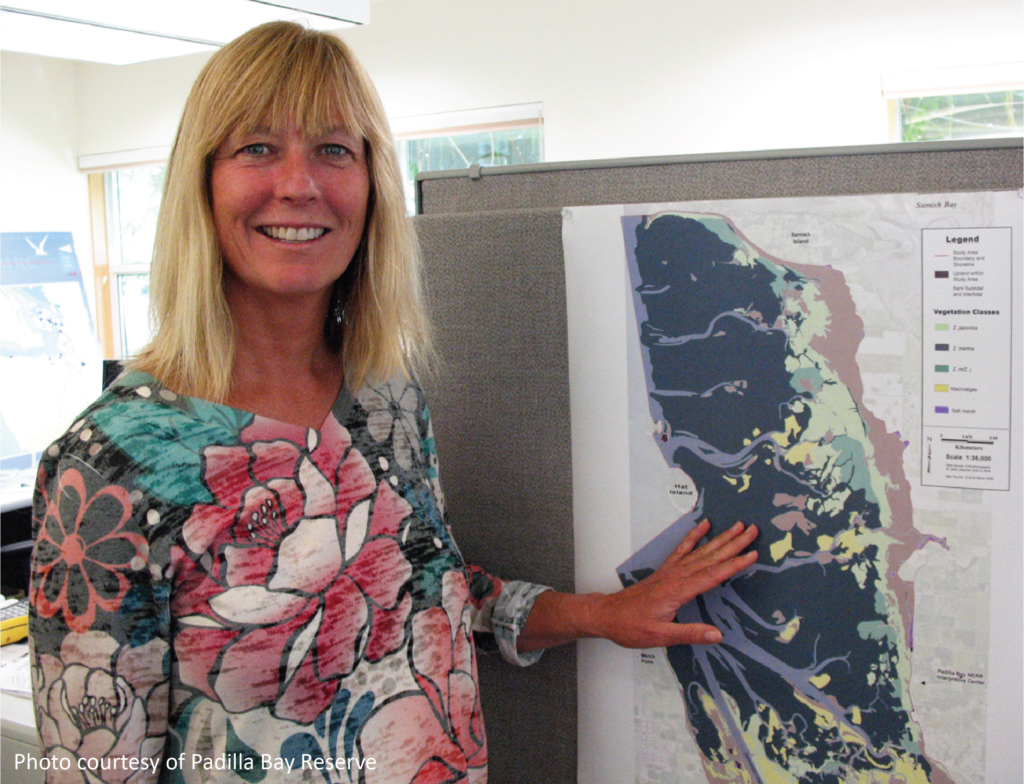 Nik: I know our GIS specialist and UAV pilot here in Wells—the incomparable Sue Bickford—still loves her some ground truthing. Do you feel the same way about getting out there, getting the old waders on?

Suzanne: I do! Next week we’re headed out to do our annual biomonitoring acquisition of vegetation characteristics and hopefully our aerial photography will be flown simultaneously.

Nik: As an expert in spaces, what does it mean to you when places change over time?

Suzanne: Well, it’s fascinating. One of the first projects I worked on at Padilla Bay was to try and get a handle on the land use changes in the surrounding watershed. It was really hard to find a way to either use remote sensing or even census data to figure out what those changes were and how we could assess them, but I found it fascinating.

The distribution of eelgrass is interesting too. The shellfish growers are not keen about the introduced species because it will grow where they are harvesting shellfish. It used to be that eelgrass in Washington State was protected, and it was irrelevant what species it was. Now they differentiate the two, and each county can decide whether or not they want to apply herbicides on the introduced species.

Nik: What drew you into this world?

Suzanne: I studied urban planning as an undergraduate, with a background in engineering, so I’d done a lot of the sciences and math. When I graduated, I was hired as a research technician for a physical oceanographer and we would study currents and coastal seas all over the world. We were starting to use satellite imagery to look at sea surface temperatures, SSTs, and we would deploy drones to do sea surface temperature measurements. That just fascinated me, that you could do that kind of science remotely. So that’s how I chose the graduate program that I went into.

Nik: …Wait, how’d you get from urban planning to SST?

Suzanne: Well, I grew up in San Diego near the Scripps Institution of Oceanography. I had done some volunteer work and a few projects in my undergraduate program studying the marshes north of San Diego. Oh, and my dad was an oceanographer—he was actually a professor at San Diego State.

Nik: Ah. The family business. And then you got to the mapping of places…Or is it mapping spaces? We had a Wabanaki tribal representative at the Wells Reserve recently, talking about Indigenous peoples’ sense of place. He mentioned that the geographer and philosopher Yi-Fu Tuan came up with a formula that, “A place equals space plus culture.” In the GIS world, how does the mapping of human and cultural resources, possibly also known as human dynamics, get pulled in?

Suzanne: That’s an excellent question. I’ve been focused on the natural resources side of it, but I do like that we’re growing our relationship with Esri, which is the company that makes the software we use. They have this thing called the Living Atlas, which has authoritative datasets that include census data, economics—whatever tribal data is available publicly… It’s a quick and easy way to bring in all those things. I would like to see more of that incorporated into our GIS products as we move forward in the NERRS, because I think it’s a ready resource that’s underutilized.

The other important thing is: how can we bring those different data layers together to tell a story? I’ll put a plug in for the Landscape Scale Marsh Assessment as a beautiful example. We have sea level rise data, land use, land cover, soil data—and we combine those to look at where our marshes are more vulnerable to SLR and where they are most adaptable. The key is in the creativity of how you get at combining those layers. The beauty of what Great Bay’s Rachel Stevens and Cory Riley did was to turn that into management actions, so you not only have this data that really supports an assessment of vulnerability, but also what you can do with that information.

Nik: There is a prescriptive aspect of it, isn’t there, where GIS specialists across the System are going, like, “Here’s what you can do,” right?

Suzanne: Yeah, but I would broaden that. What I’d like to see is that all of the sectors value the use of that GIS data to be prescriptive, so that it gets incorporated into every project that we do. GIS can seem like a scary word. People are like, “That’s a technical thing and that goes over here in the corner,” but we should start thinking of giving these projects a spatial component. You can take all the data in the world, but to know what to do with it is going to take the minds of all these different types of thinkers and scientists and outreach specialists and educators. 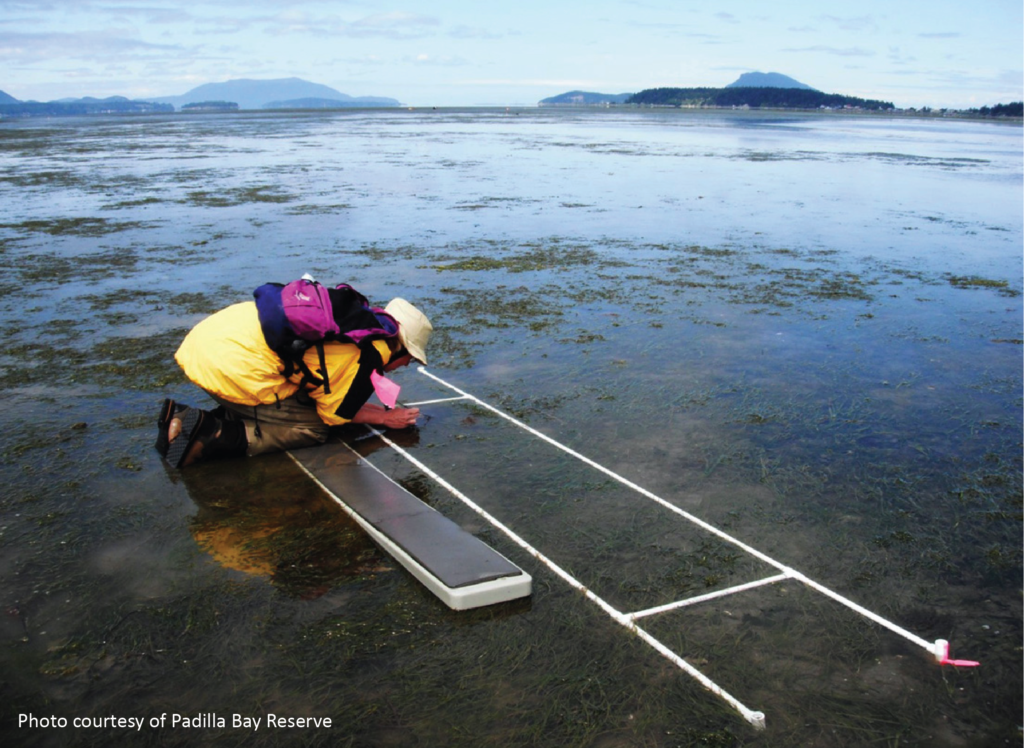 Nik: Not to put you on the spot, but how might you bring your work to a summer camp for kids? I’m looking out my office window at some campers right now. How would we take your big scary GIS to first and second graders that have a couple of weeks with us in the summer —can we do it?

Suzanne: Oh yeah, they’d eat it up! You could take them to the beach, do surveys for forage fish eggs, and then look at the sand those eggs are sitting in. Back in the lab, you can look at your online mapping application and it will show you where the feeder bluffs are located, where the eggs they found are located, and where that is relative to, say, the kelp and eelgrass beds. You put that whole story together, and they just love it, right? Because kids are super good at the digital side of it. They can add the layers and build the maps more easily than many adults.

Nik: …You just did that off the top of your head? That was amazing. ECs, take note. What’s your favorite animal at the Reserve?

Suzanne: The sea slug [laughs]. You heard of the Bowiebranchia, that website that compares David Bowie’s outfits to sea slugs’ color patterns? Oh, it’s fabulous. He nailed it in so many ways and they’re just such amazing animals.

Nik: No way! Also, thank you for not saying sea otters. As a space and place person, what’s your favorite spot in Padilla Bay?

Suzanne: I have done a lot of ground truthing out there and I’ve been to a lot of places nobody else has been. There are some channels out there where, on a low tide, water drains off of the eelgrass meadow and creates a waterfall effect down into the channel, and it’s absolutely full of fish.

What I’d like to do is take all those groundtruthing data points I’ve collected with photographs and build a story map that archives all of that. I’m probably going to retire in the next ten years, so I think about all this data I’ve got that nobody else knows even exists. I love story maps for that; it’s not dry data, it’s a story you can really use.

Nik: Right. And it would be your story. Your footsteps. From 24 years in the same place. I mean, in your head you have a generation of knowledge.

Nik: With all respect!

Suzanne: No, yes, thank you. It’s an honor to be able to age. It really is.

Nik: Safely and healthily. I’ve heard rumors that Padilla Bay will someday soon be hosting the annual meeting, should we go back to annual meetings in person. In Wells, there’s no hotel big enough.

Suzanne: Yeah. I just visited Steve Baird up at Kachemak Bay. Oh my goodness, talk about heaven on earth. It would be virtually impossible to do an annual meeting there but, man, I think it would be really good for all of us to witness what it is that they’re doing up there.

Nik: We could charter a cruise ship. It could be the NERRds Cruise.

Nik: Solved another one!