Sep 29, 2020 | Informed Citizens, Kachemak Bay, Alaska, Reserves, Talk NERRdy to Me, What We Work For 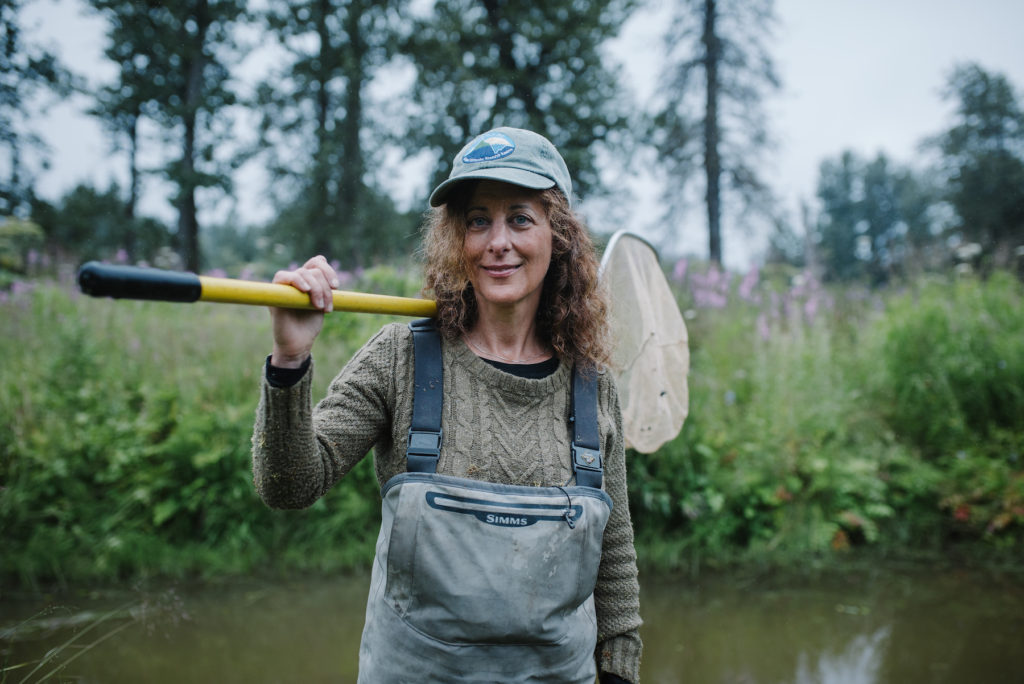 Talk NERRdy to Me is a monthly column about leaders and luminaries from across our 29 Reserves. This month, NERRA’s correspondent-at-large Nik Charov Zoomed to Alaska to talk with Coowe Walker, manager at the Kachemak Bay Reserve. They talked about how a D.C. native ended up freezing in a tent in Ketchikan, making a difference for salmon and streams, and the different ways of knowing the NERRS only fjordic estuary.

Nik: Coowe, as an ecologist, what are the differences between Alaska and the Lower 48?

Coowe: When I first moved here, it struck me how you really feel the wholeness of the ecosystem because we have top predators. Orca in the ocean, brown bears on the land… you feel humble, because humans are not the top, and we haven’t modified the landscape to serve us.

Nik: But in Alaska, everything’s enormous! Maine has ten-foot tides, what do you have?

Coowe: 22 feet. Things can be harsh here. I have a colleague from Florida who works up here. He and his students worry about moose and bears and all that, but then he shares his stories of alligators. Dealing with alligators in Florida seems way scarier than anything here!

Nik: At least I can relate to mammals. How’d you get to Alaska?

Coowe: I grew up outside of DC. The way I got to Alaska was really through my husband, Russ. We met in Penn State, but he’s one of those adventure people who’s not into school. So he hitchhiked to Alaska and came back and said, ‘We’ve got to go to Alaska!’

So we ended up in Alaska, and we were broke, and we basically tried living off the land. But we were suburban kids who ended up in Ketchikan, eating berries and fish. We had no idea what we were doing! We were hungry and cold and all the other things you are when you try to strike out on your own. We lived in Southeast Alaska in a tent.

Long story short, it started getting really ugly in the winter, and I said ‘I’m out of here.’ We broke up, I went back to school, and we were apart for 13 years. Then I was coming back to Alaska for a Society of Wetland Scientists meeting in Anchorage in 1998, and we’d been exchanging letters.

Coowe: Yes! He had stayed in Alaska after we split up, and figured out how to do all those things we were trying to do—hunt and fish and build and live off the land. And I said, ‘you know, I’m coming to Alaska for this meeting, do you want to meet up?’ And he met me at the airport, and we went to the Brooks Range. I never went to the conference. Russ and I just totally reconnected, and Alaska’s where I’ve been ever since.

Nik: Have you always been into the outdoors?

Coowe: Yep. My parents were campers. We lived near a creek, which was the center of my universe as a kid. I was in a wildlife technologist program at Penn State. Because I was in the tech track of things, I got in the field right away. I wanted to be outside! I think something the Reserves do well is connect students with nature and make what people are studying relevant. This is why we study ecology—to go outside and do things!

Nik: Wasn’t Alaska daunting, though, compared to the East Coast?

Coowe: I get excited about opportunity, and Alaska has opportunity like no other place, because we haven’t trashed it yet. We have all this science, all this attention, and all these people who are connected and care because they depend on the resources still. Our family harvests our protein from the land. Most families do that around here, or else it’s their livelihood—commercial fishing and tourism are the largest industries in Homer. People have a very direct connection with the natural world here, so they value it.

This is why the Reserve is so exciting to me. We do the science, and we understand how the landscapes are working to support salmon in particular. We take commercial fishermen out in the field and show them these tiny baby salmon, which they’ve never seen before!

Nik: What does that do to their understanding?

Coowe: We’ve been doing this for a couple years now, and last year we brought out the North Pacific Fisheries Association and showed them the baby salmon and talked about our science and how the landscape is supporting that salmon stream via alders and peatlands and groundwater. After that they went back and had a meeting and said ‘You know what? We want to buy land to protect those baby salmon.’

And they are working with the land trust to do that now, though we didn’t ask them to. They recognized its value to their livelihood. We all live on the landscape next to these tiny streams where these baby salmon live, but until the Reserve came, nobody really knew there were salmon in those streams, or that the watersheds where we live were important to supporting them. That’s the other thing about Alaska—it’s so big a place and there’s so little research. There are huge gaps in knowledge, and the Reserve has been able to fill a big hole. We make a difference.

Nik: Alaska has been inhabited for a long time, right? There are Native communities there with whom you must work closely?

Coowe: I’m embarrassed it took us this long. The Reserve has partnered with Native communities all along, but it took us a while to actually acknowledge how those communities and their ancestors have been stewarding this landscape for 10,000 years. The indigenous community has a wealth of knowledge.

We’ve really just started in the last two years to engage them in a way that has us listen and acknowledge more, has us saying ‘thank you for stewarding this land. Because of you and your ancestors, we have these opportunities.’ 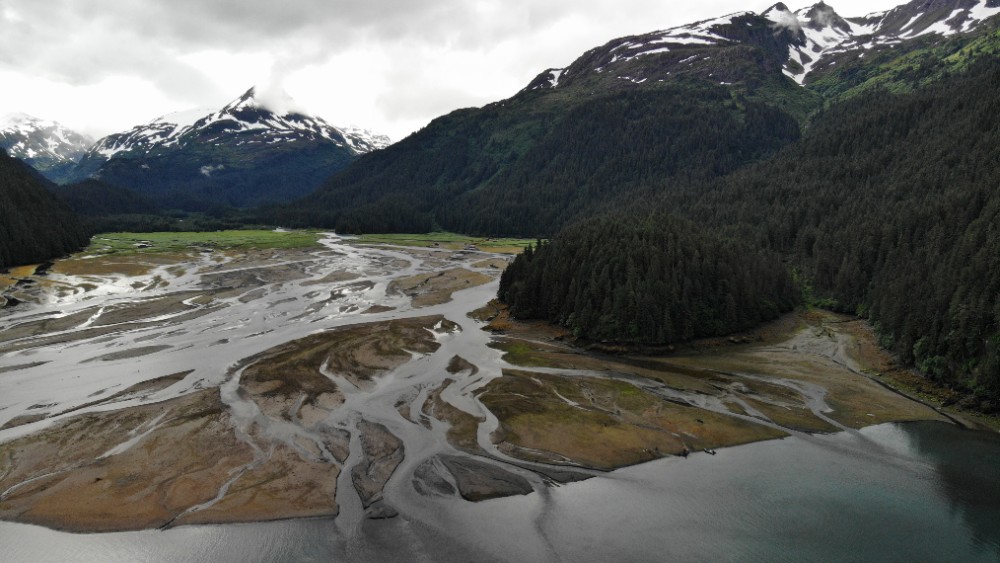 Nik: I was just reading an article about how the early peoples in California managed fires with controlled burns and would not let the fuel build up the way we have for the last 100 years.

Coowe: Right.Those trips with the fishermen I mentioned—we partner with our local land trust on those, and we call them ‘Fish Need Land Too.’ Several indigenous people were involved with that program. [Watch a video.]

An artist named Argent Kvasnikof from the Ninilchik tribe was really excited to learn about the science of how landscapes support streams and how that relates to his exploration into the oral stories from his culture. There’s a strong tradition of land stewardship, like you were saying about the California fire management.

One thing he’s focused on is indigenous wayfinding. For instance, the wayfinding from the headwaters to the ocean. This mirrors the perspective of a baby salmon that has to find its way from the headwaters to the ocean, and how the landscape supports the stream that baby salmon is in. We study that through science, but there are indigenous ways of knowing, too.

Argent is a visual artist and after attending the virtual field trip, we asked people to take a blank card and write something on it you’re going to do to be a “salmon ambassador.” He wrote in his language, Dena’ina, the word for ‘alder,’ which is an important landscape plant that provides nutrients for salmon streams. Then he took the word for ‘dignity and respect for living things’ and he combined them to make a word, ‘respect for alder.’ He took what we’d been talking about in a science-y way and embodied it in his own oral traditions.

In Western culture, we don’t talk often about the dignity of trees, respect for trees-—it’s not part of our regular way of thinking. But indigenous Alaskan people do. It’s a way of thinking that’s so interesting and powerful and important to combine with ecology. So we’re starting to try and bring the pieces together, and build something better.

Nik: I always tell my kids to respect their alders. Speed round: salmon or halibut?

Nik: Then I’m not asking you the fresh and salty question. Coowe, we first met at an annual meeting at the National Conservation Training Center. A group was around the fire, playing guitar and singing, and you sat down and suddenly pulled out a flute, Ron Burgundy-style, from your sleeve!

Coowe: For me, whenever I’ve traveled, it’s just a way to make friends pretty quickly. We can play music together, we don’t have to know each other, or even speak the same language. I do love the flute. 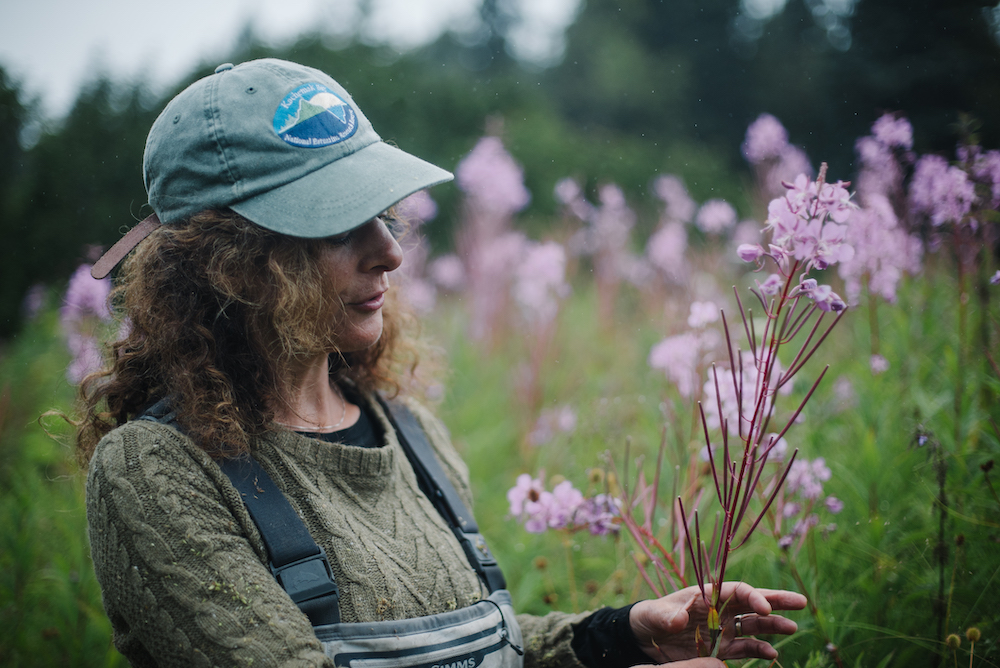 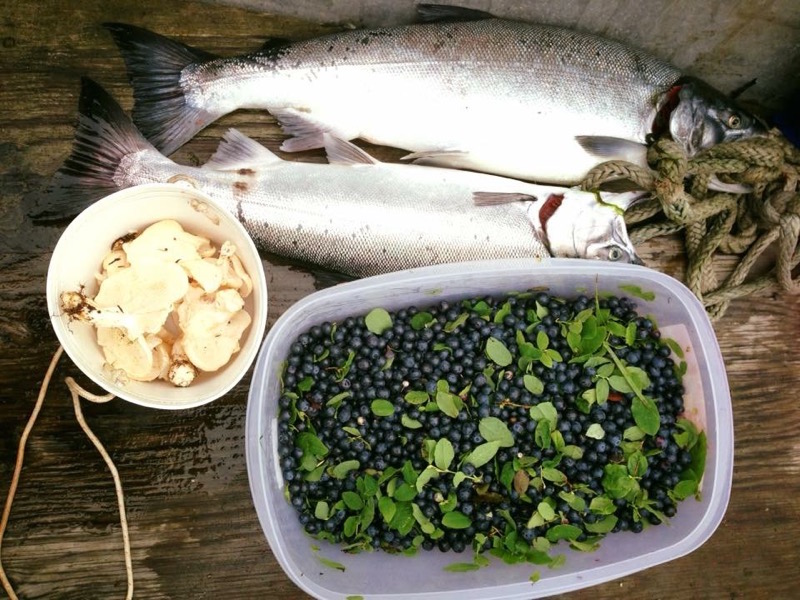