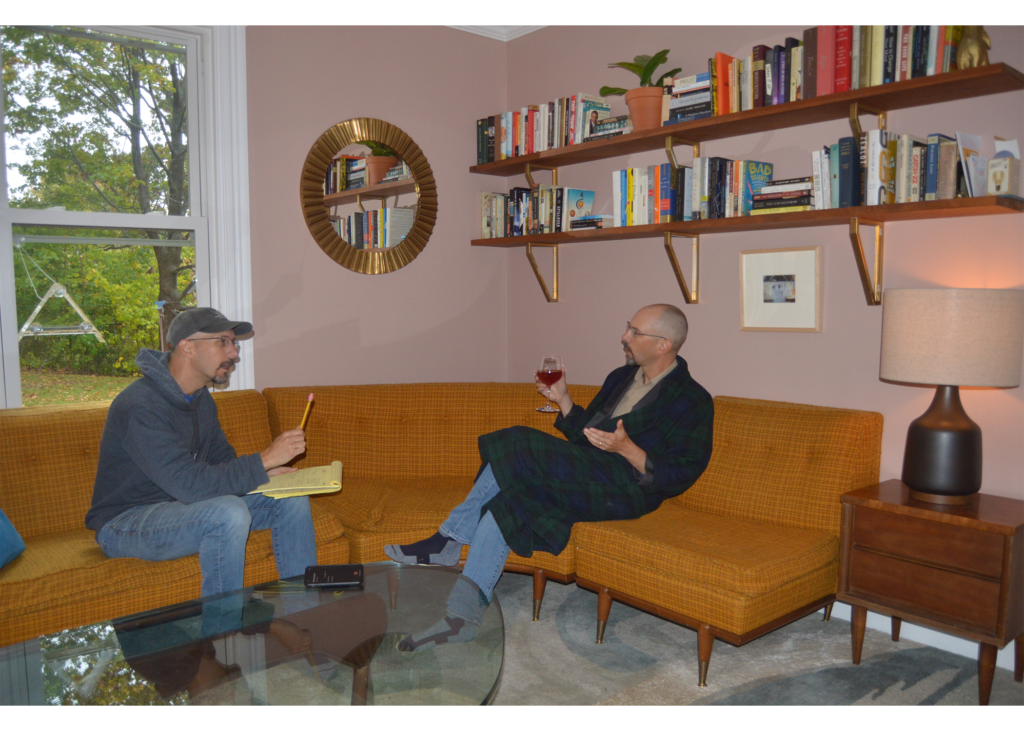 Talk NERRdy to Me is a monthly column about leaders and luminaries from across our Reserves. This month, NERRA’s correspondent-at-large Nik Charov interviewed himself, in a ludicrous bid (get it?) to build excitement for the annual NERRA auction, which he somehow got stuck co-managing some years ago. While everyone else was busy doing real work.

Nik: Hi Nik, welcome to Talk NERRdy. It’s so good to finally sit down with you.

Nik: Whatever. This is your psychotic, quarantine-borne delusion; I’m just here for the snacks.

Nik: That’s great! Every year at the annual meeting, whether it’s in-person or virtual, NERRA raises extra money for all the good things it does through an auction of donated handmade goods, services, trips, and equipment. That support helps NERRA lobby on behalf of the NERRS in Congress. But tell us, Nik, what don’t we know about the NERRA Auction?

Nik: Oh, it’s wild backstage. If it weren’t for the multi-talented auction committee, the whole thing would go down in flames. First of all, the items come in like a California mudslide, and we have scant hours in between Important Meeting Sessions™ to sort them, price them, arrange them, and determine which special ones go into the live portion of “The Show,” as we call it. The trips and the SWMP equipment, the “rare” wines from New Jersey, and rum from Jobos Bay—those are all locks for the live auction. But then … there’s the weird stuff.

Nik: Can you remember any particular items?

Nik: Funny thing about that: I reached out to a number of past auction committee members about their favorite items from auctions past and most said, “Oh, somehow I just can’t remember.”

Fortunately, auctioneers have perfect recall. Over the years, we’ve sold beaver nuggets, fake cat vomit, lost & found wallets, industrial lubricants, Estuary beer, precious art … and uh, less-precious art. I sold myself in 2012 as a dodgeball free agent, but that got awkward … Anything for NERRA, I guess. (shrugs)

Nik: How did you get into auctioneering?

Nik: Well, as a young boy, I spent my summers tidepooling on Maine’s coast, picking up periwinkles and selling them to other beachcombers. I also wore a lot of suits as a kid and majored in Competitive Microeconomics at Duke.

Nik: Hmm. Are you usually funnier in the auctions?

Nik: Yes. Listen, it’s not an easy gig. I really don’t like talking into a microphone [Editor: this is a lie], and I really don’t think it’s fair to coerce the Underpaid NERRds of America to spend their government salaries on sea turtle jewelry or metal water bottles.

But then again, I do love to sell things and make fun of people like former manager Willy Reay. Plus: the NERRA auction is super important. How did I get into it? Like so many NERRA volunteer opportunities, co-managing the auction was an “everyone else stepped back while I wasn’t paying attention” selection process.

Same thing happened to my fellow auctioneer Chris [Bowser]. We filled a vacuum. The previous auctioneers, Terry Stevens and Peter Wellenberger, God rest their souls, were great, but they retired to The Old Auctioneers Home in … 2015, was it? 2016? I’ve heard they’re still there, writing books about climate change on sheets of toilet paper. 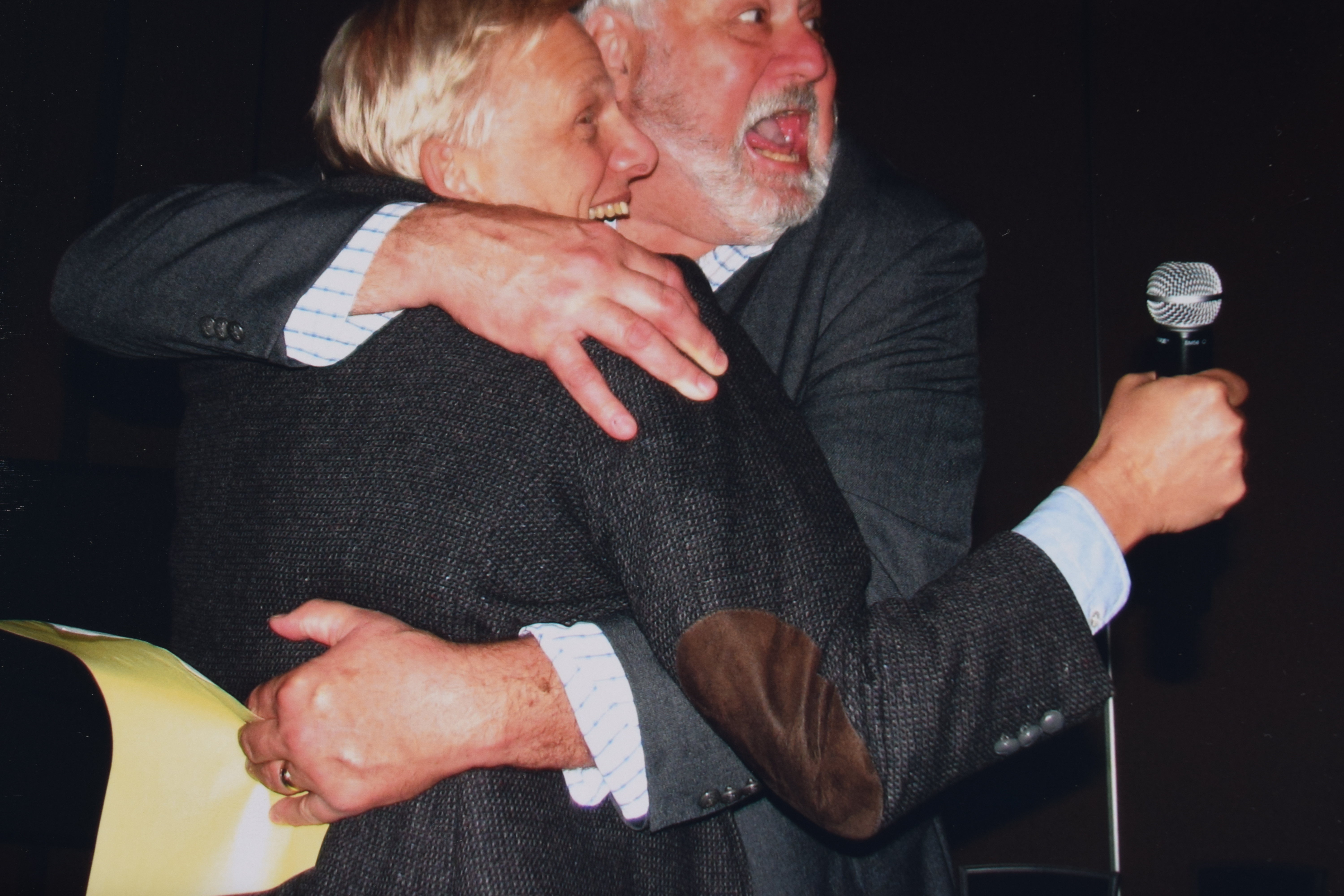 Nik: You mentioned Chris Bowser? Isn’t he “the funny one” in the auction?

Nik: He was, yes. Also “the loud one.” But at the last in-person meeting, he sold an enchanted mermaid doll handcrafted by known sorceress Betsy Blair. Chris fell under a powerful curse, and we haven’t seen him since. 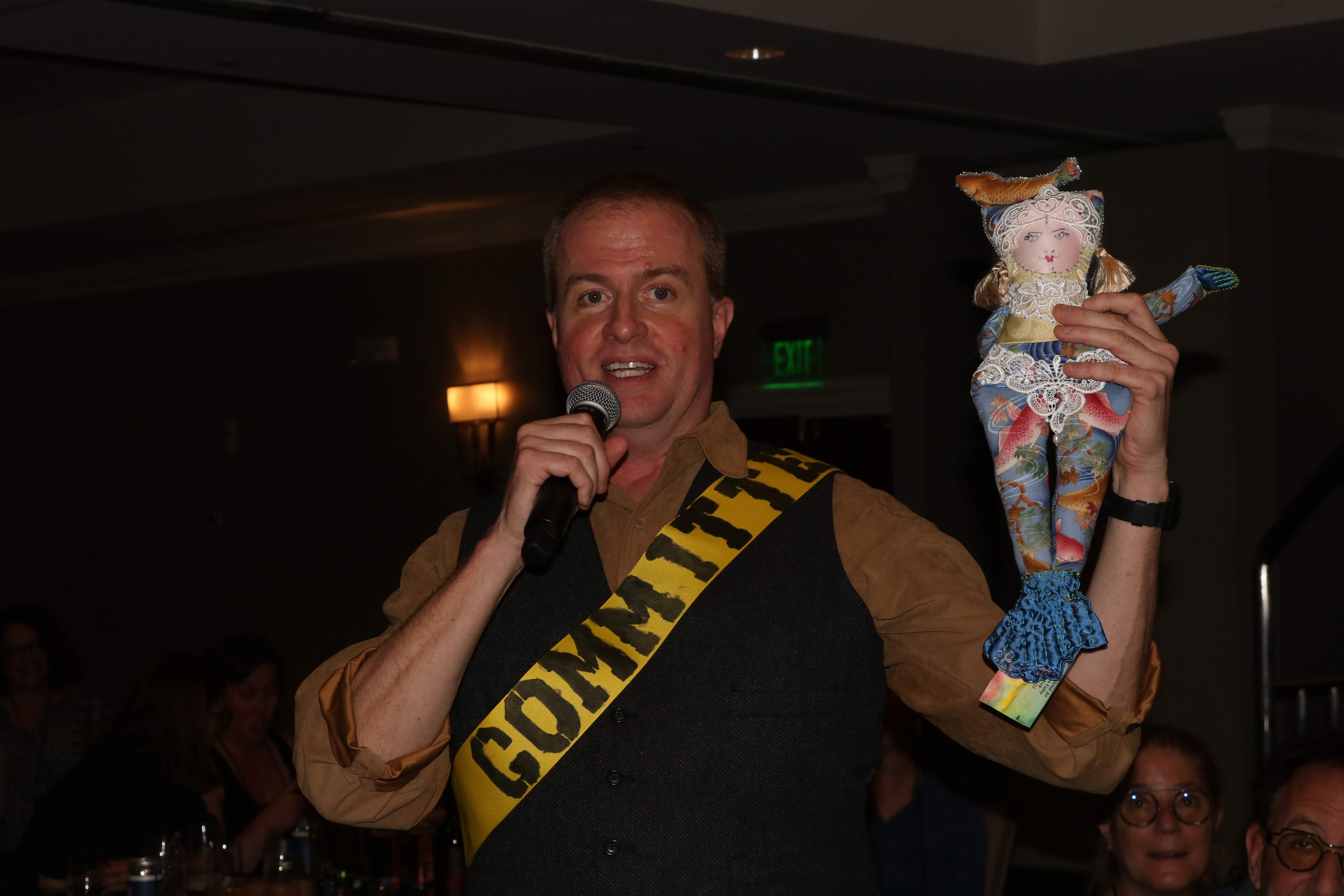 Nik: You auctioneers have been known to walk the edge of humor?

Nik: Listen, it’s for charity, and we expect the audience to be charitable. The sound system never works anyway, so most of the jokes turn into “<crackle> <hum> crabs <hiss> <pop> Delaware.” The most important thing is that we’ve cut the auction down to just 90 minutes of malarkey and shenanigans, and it reliably raises twenty thousand dollars. You wouldn’t believe how long the old auctions used to go … 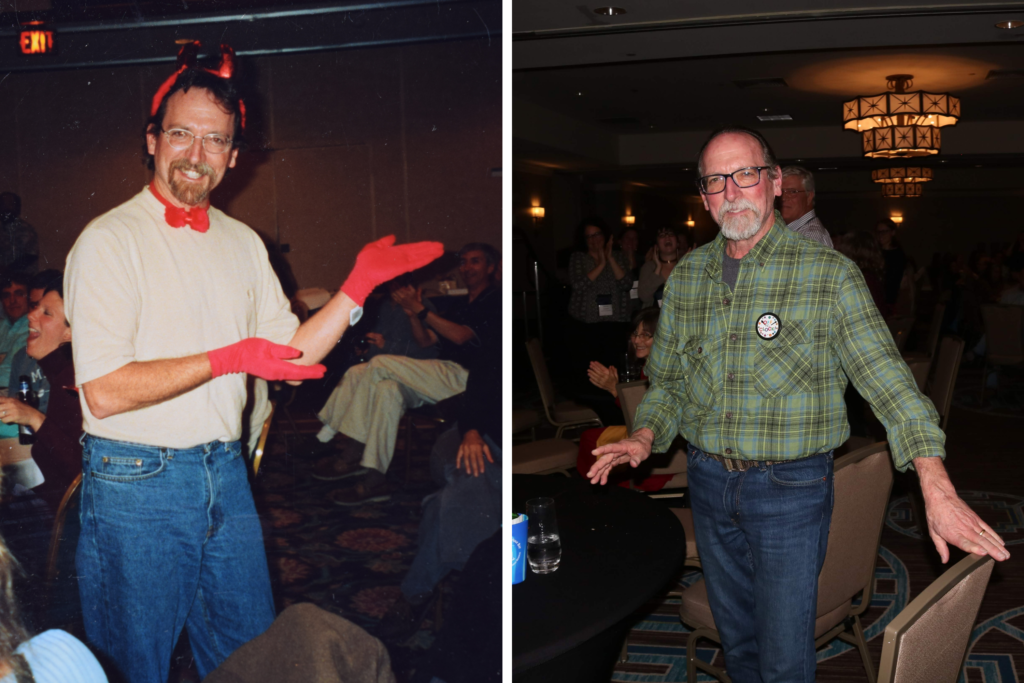 The auctions used to go on so long, these photos of former Great Bay CTP Coordinator Steve Miller were taken ON THE SAME NIGHT.

Nik: The annual meeting is once again virtual this year, and so the auction is solely online. It’s one big silent auction showcase. Does that make it less fun for you and the team?

Nik: We’ll be back together again in Seattle in 2022, because Jude Apple bought a fusty, cryptic blanket in 2019 for $800 and—surprise, surprise—it comes with Annual Meeting hosting duties. Sucker! No, seriously, the team is really looking forward to hawking crustacean art, overpriced bumper stickers, three-sleeved handknit sweaters (or were those pants, Coreen?), and beautiful sweetgrass baskets from Sapelo Island, live and in-person again.

I think we’ll be adding more musical numbers in the future, maybe some juggling or burlesque routines. Really, the sky’s the limit. We’ve got material and merchandise for years. I’ll do anything for NERRA, because they’ve got a lot of compromising information on me. 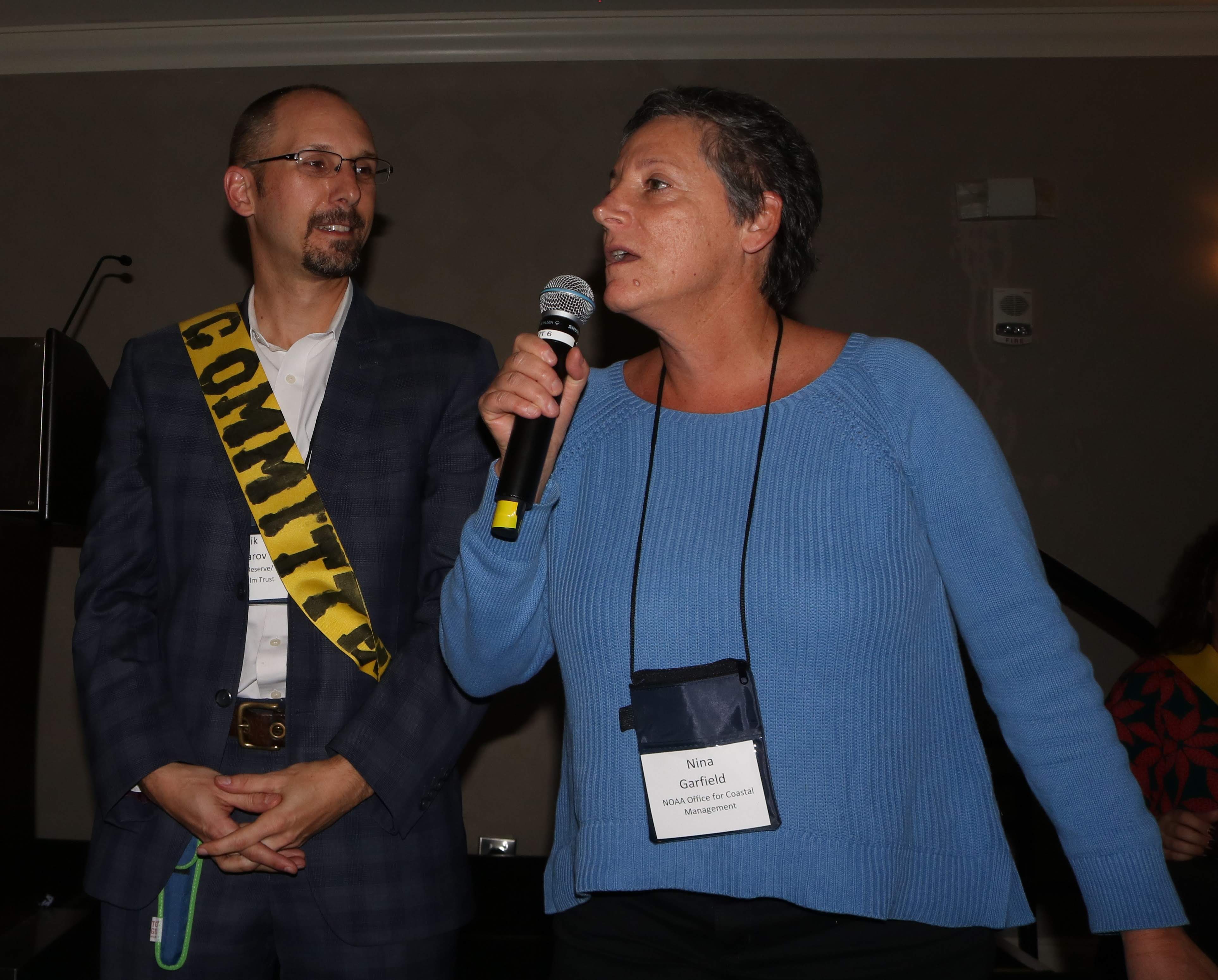 Nik: Do I hear three? Can we get five more years?

Nik: I see what you did there.

The 2021 NERRA Auction runs from November 1 to November 18. Register to bid and get shopping now! 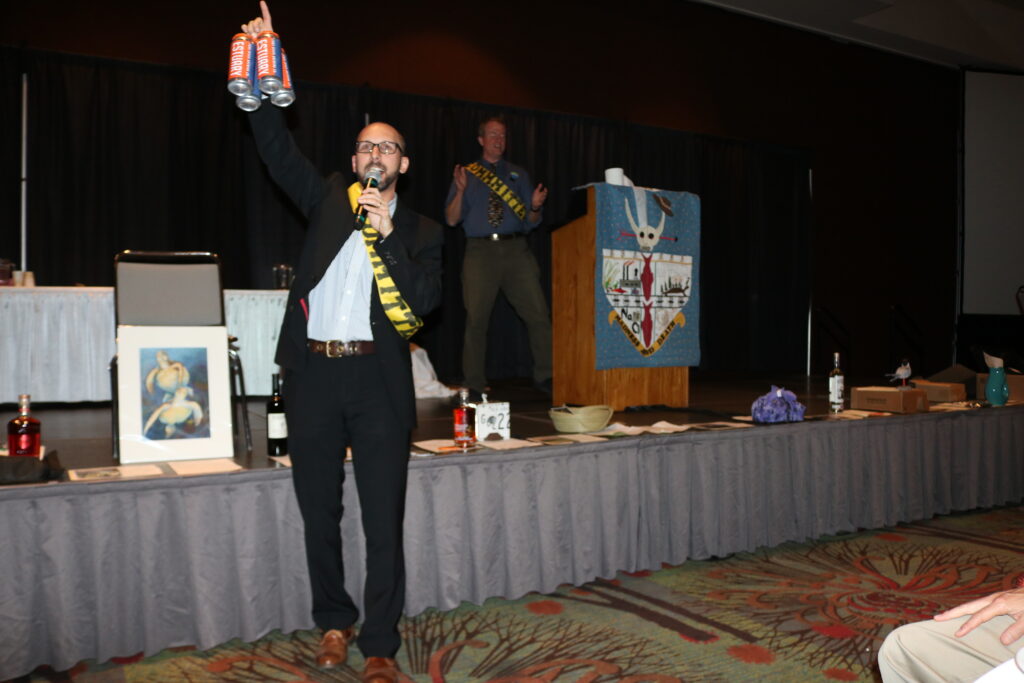