Talk NERRdy to Me: Keith Laakkonen 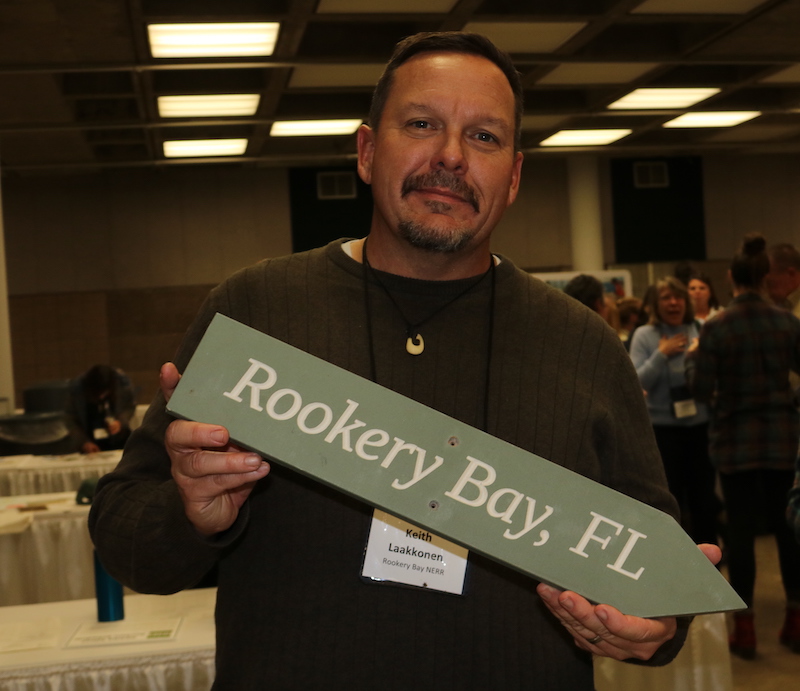 Talk NERRdy to Me is a new column about leaders and luminaries from across our 29 reserves. This month, NERRA’s Maine correspondent Nik Charov catches up with Keith Laakkonen (above), Rookery Bay’s all-star manager and future NERRA president. And no, he’s not a Florida Man. (Interview edited for length and general appropriateness.)

You spell your name L-A-A-K-K-O-N-E-N. Is that true, or is your keyboard sticky?
It’s Finnish. I actually just found out that I’m of Laplander origin; they are reindeer herders!

Where’d you grow up?
Southwest Florida. I always wanted to be a biologist. In Lee County, we had these really cool areas like Matlacha Pass and Pine Island. I remember trying to catch snook and redfish out there and I just kind of fell in love with mangroves and the coastline. It was always so much cooler than the freshwater areas, because there was so much going on. Next thing I know I’m at the University of Florida – go Gators! – studying Wildlife Ecology.

How did you get into the bush?
I worked my way around the state with Florida DEP at some aquatic and buffer preserves, the places I had grown up fishing in. There was this place, Rookery Bay in Naples—I was always very impressed by Rookery Bay, actually had a poster in my room as a kid…. I was really stunned to realize that I’d loved the place for that long, it’s such a memory for me… In 2005, their stewardship coordinator was leaving, and Gary Lytton hired me. I worked [at Rookery Bay Reserve] from ‘05 to ’07. In 2014, I was ready to move out of Florida and said there was only one thing that could keep me here—Gary’s job. He was retiring and he told me to apply for it. I’m still stunned to this day that I got it and that I have the honor of working at Rookery Bay.

What’s the best part of your job?
One, working for everyone at the Reserve, trying to make their jobs easier as much as possible. Two, any time when I get to use some of my hard-won biology skills.

Do you miss being a Stewardship Coordinator?
I miss getting out there with a chainsaw and doing the prescribed fires. I don’t miss the endless battle with exotics. I’m also happy to be a manager so I can really serve all the [Rookery Bay NERR] staff.

As the incoming president of NERRA, what do you hope for your first 100 days?
I hope that NERRA still exists after my first 100 days.

Nice S-M-A-R-T goal.
NERRA really embodies the passion people have for the system—people really take on this intense responsibility to be the voice of the system. I’ll try to do the best job I can in the best way I can. We’re all different people and we bring different strengths. My goal is to leave the system better than I found it, and that’s a tall order because it’s a pretty amazing system.

Often we see ‘Florida man’ used as a national news punchline. What makes a ‘Florida man’ and are you a ‘Florida man’?
I am not a Florida man; I’ve never been arrested. Listen, it’s hot down here, it’s sweaty, we have hurricanes and love bugs and tourists and it is a bountiful canvas for interesting people from all around the world.

While you’re not a Florida man, you have had a near-death experience. You were nearly chopped to pieces by a boat propeller and could have bled to death. After that terrifying experience, I have to ask: was the propeller OK?
The propeller was OK. There’s still a few chunks of my bone sunk out there. I did think, ‘at least it’s in the Reserve.’ That was my first thought, actually, when it happened. Right after ‘Oh dear god, I might die.’ I hope in my own way, I contributed to the energy flow of the ecosystem by contributing my own parts and pieces and fluids to benefit the estuary.

That’s gross and yet illuminating. Lightning round: salty or fresh?
Salty.

Sorry, the correct answer is “the one that you have now.” What’s next for Rookery Bay?
Resilience, in South Florida and around the state. And hopefully getting through another hurricane season without getting whacked.