Talk NERRdy to Me: Kerstin Wasson 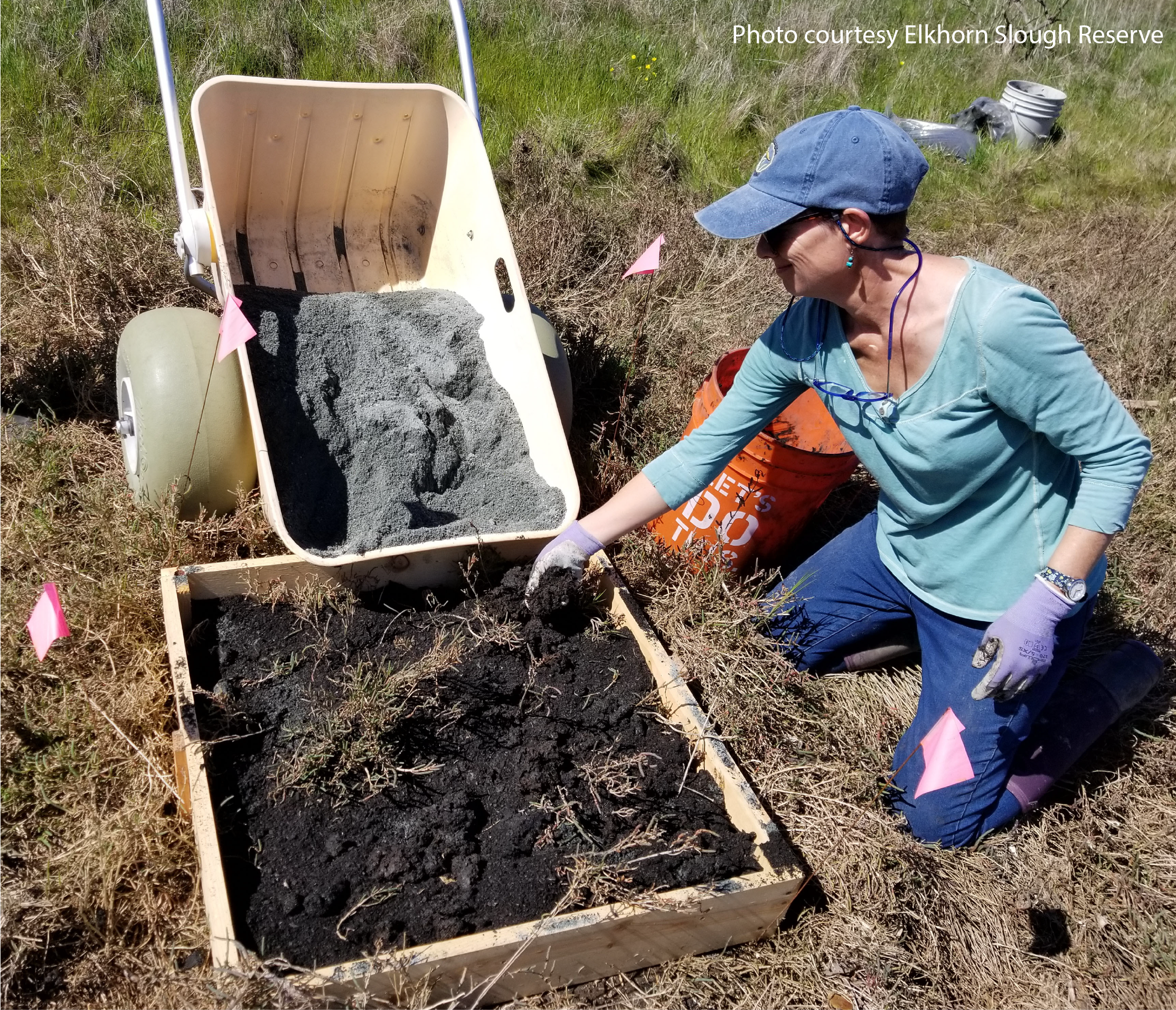 Talk NERRdy to Me is a monthly column about leaders and luminaries from across our 29—soon to be 30—Reserves. This month, NERRA’s correspondent-at-large Nik Charov interviewed Dr. Kerstin Wasson, research coordinator at the Elkhorn Slough Reserve. They talked about marsh making, work marriages, ungrateful and grateful children, Indigenous knowledge, and the non-monetary valuations of mud.

Nik: Welcome to Talk NERRdy, Dr. Kerstin Wasson! You recently told me Kenny Raposa was your work husband. How does your home husband feel about that?

Kerstin: Many days I interact more with Kenny than with my husband. We often send hundreds of messages back and forth within a week. We don’t really talk or see each other, but we interact through collaborative manuscripts. It’s been one of the high points of my last decade of work to interact with Kenny Raposa. It’s just what a collaboration should be when you’re challenging each other and debating things, but making it better as a result of that.

Nik: Are you referring to the National Synthesis?

Kerstin: In the last decade of NERR work, my main papers have been with Kenny. The assessing tidal marsh resilience to sea-level rise (MARS) project was the first in a series of collaborative projects. Then we looked at crabs across the NERRS, wrote another paper on that, then we coordinated a thin layer sediment restoration experiment across eight Reserves. We’ve been trying to camera trap across all the Reserves but haven’t found the funding yet. 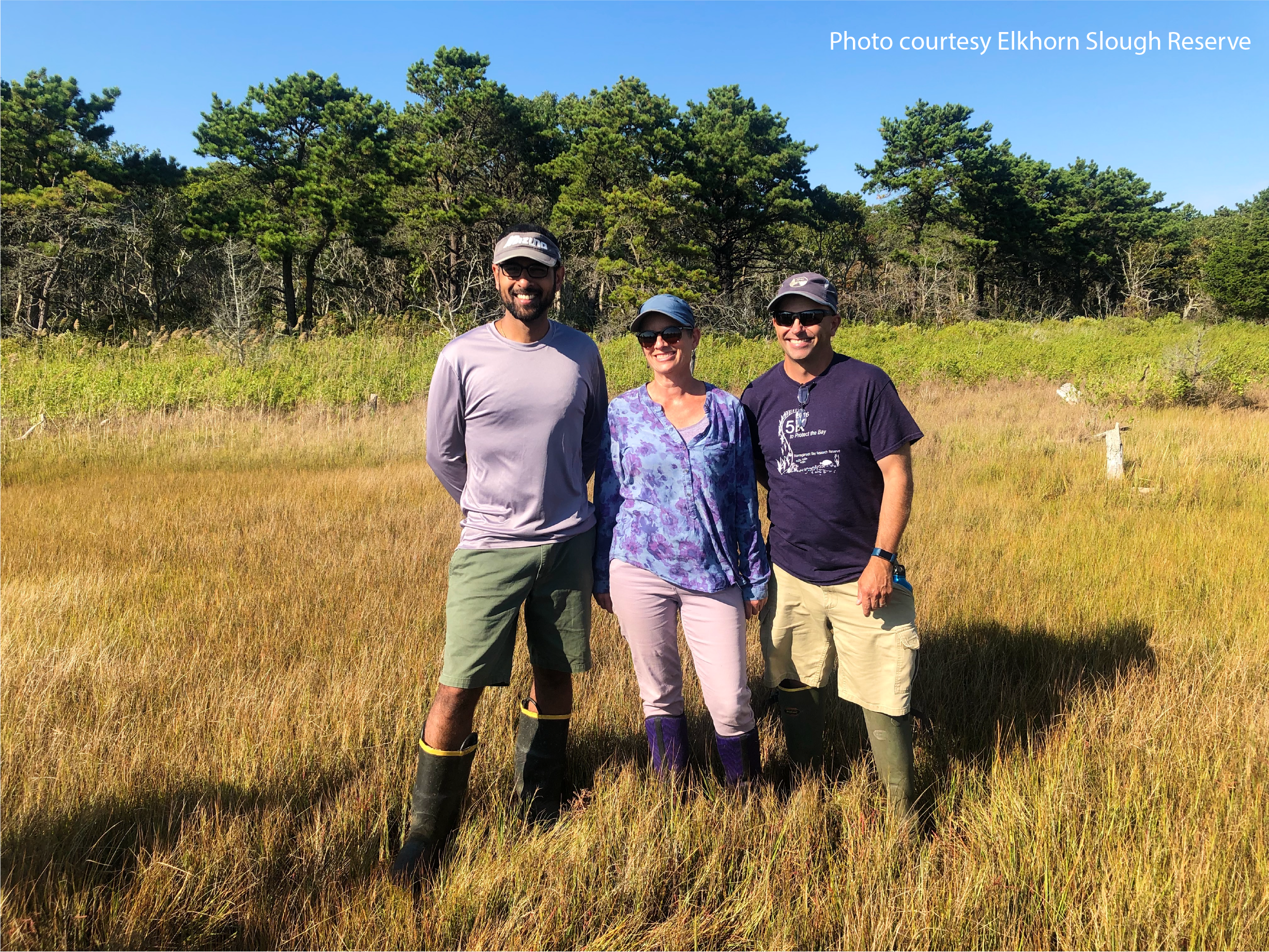 Kerstin: Scary, but fun. We are super proud that we did this, with a huge team and a lot of funding, of course. We asked, “How high should we make it?” and the answer was “as high as possible without becoming a grassland.” The king tides need to get it wet so that you don’t show your funders, “Look at this weedy pasture that we made!’”

Nik: I’ve got a weedy pasture in my backyard. Agreed: not impressive.

Kerstin: And because it was going to sink, we wanted to overfill it, but how much do you overfill? And what about tidal creeks? If we fill the whole thing, it has no creeks. Where are we going to put them and what should they look like? We decided to use history as a guide and look at the 1931 aerial photo—our oldest—and make them that way.

Nik: What does it mean to “make” a tidal creek?

Kerstin: We thought about maybe filling them with straw or something and protecting them, but it was more effective to just dig them out at the end. On a smaller scale, we are now doing lots of experiments.

My hero, restoration scientist Joy Zedler, encouraged the NERRS to use large-scale restoration activities as a place to learn and do science, and we have really taken that to heart.

When the landscape was bare, people used to ask, “Is it a flag farm?” Because there were so many red flags for this experiment and green flags for another. We planted 17,000 plants! We are learning from this restoration and that part is a lot less scary than playing God at the large scale.

Nik: You generously bumped a graduate student off your schedule so that we could talk today. How are the kids coming up? Did they do all that planting without complaint? What faith do you have in the future?

Kerstin: They’re awesome. My academic daughters are so much more grateful for the advice I give them than my biological daughter.

Nik: Because you’re not related to them. I have teenagers, too.

Kerstin: I love having graduate students and working with them. The gold standard of what we know about the estuary comes from graduate theses that really dive into something. We provide a lot of guidance and logistic support in return.

Kerstin: Sea level rise is threatening marshes in so many regions. If we can save an existing marsh, that’s better than anything we can create. Meters of peat represent thousands of years of carbon sequestration and plant and animal communities that take hundreds of years to form. But sea level rise is not going to leave us many choices.

In Elkhorn Slough, modelling suggests we will lose all marshes to 50 centimeters of sea level rise. If we want there to be a marsh for our great-grandchildren, the one we built is going to be the only one there. However, we also made some migration space for it to move up. I think that a lot of us will be doing that across the System in the coming decade.

Kerstin: Andrea Woolfolk, our stewardship coordinator, has done a lot of historical ecology research in the region to really inform our restoration work. She discovered that one of the first European landowners in the area was a woman named Hester Miller. She had a dozen or so kids and that seemed like a good omen for our marsh, to have a female name and a fertile landscape.

Nik: It rolls off the tongue. Hester sounds like a heroine in an Austen novel.

Nik: Hester Prynne! Right, but that’s New England. Speaking of which, let’s get back there, because I’m too jealous of California’s beauty.

My chat with Kenny was a little depressing—he’s  spent his entire career in Rhode Island and he expects that, within his lifetime, everything that he’s worked on may disappear. I guess I understand why you’re on a first name basis with your marsh—it’s something that will outlive you and won’t drown. It’s gotta be pretty gratifying to bring that into the world. And scary as well. Like parenting.

Kerstin: Climate change is going to alter our estuaries but that scares me less than the outright loss we’ve seen in the past century. Half of the Elkhorn Slough estuary is behind dikes and water control structures, which is a much bigger change than a marsh converting to a mud flat.

When marshes drown in sea level rise, migratory shorebirds will feed on the mudflats they become, and fish nurseries will expand in the eelgrass, which is actually thriving in the estuary. Sea level rise may allow us to regain disconnected wetlands, and conservation organizations may restore some of those lands. It may actually look better in 50 years, so I’m optimistic.

Sorry… my [home] husband’s coffee timer keeps beeping. He doesn’t want the french press to brew too long or too short.

Nik: We use an eight-minute brew in my house. How do you do it?

Nik: I don’t trust tea drinkers. First, you’re lauding colonialism with your Hester Prynne Marsh, now you’re talking about tea. Why couldn’t you have named it after the Native Americans?

Kerstin: I wish we had more of an understanding of who was living around our estuary and what they were doing. But we are partnering with the Amah Mutsun Tribal Band, who are trying to reconnect with their ancestral lands.

Most of them can’t afford to live in coastal California but they come back and do activities along the coast with partner organizations. On December 1st, they’ll be doing oyster restoration with me. We’ll learn from each other; our Reserve staff will learn about cultural perspectives and spirituality that they bring to interactions with nature and coastal stewardship. Their tribal members have never seen, touched, or eaten a native oyster even though their ancestors ate them for millennia.

Nik: More and more it seems that there are connections with local tribes in the NERRS, working together and sharing traditional ecological knowledge, but your approach sounds different.

Kerstin: I think there are prospects of learning from Native American communities further north on the coast that still have experience passed down directly from generation to generation. There are reservations near the Padilla Bay Reserve on coastal lands and oyster restoration efforts. Not every culture had the same practices but there are probably commonalities that could be exchanged up and down the coast. We’d love to work on that in the coming years. 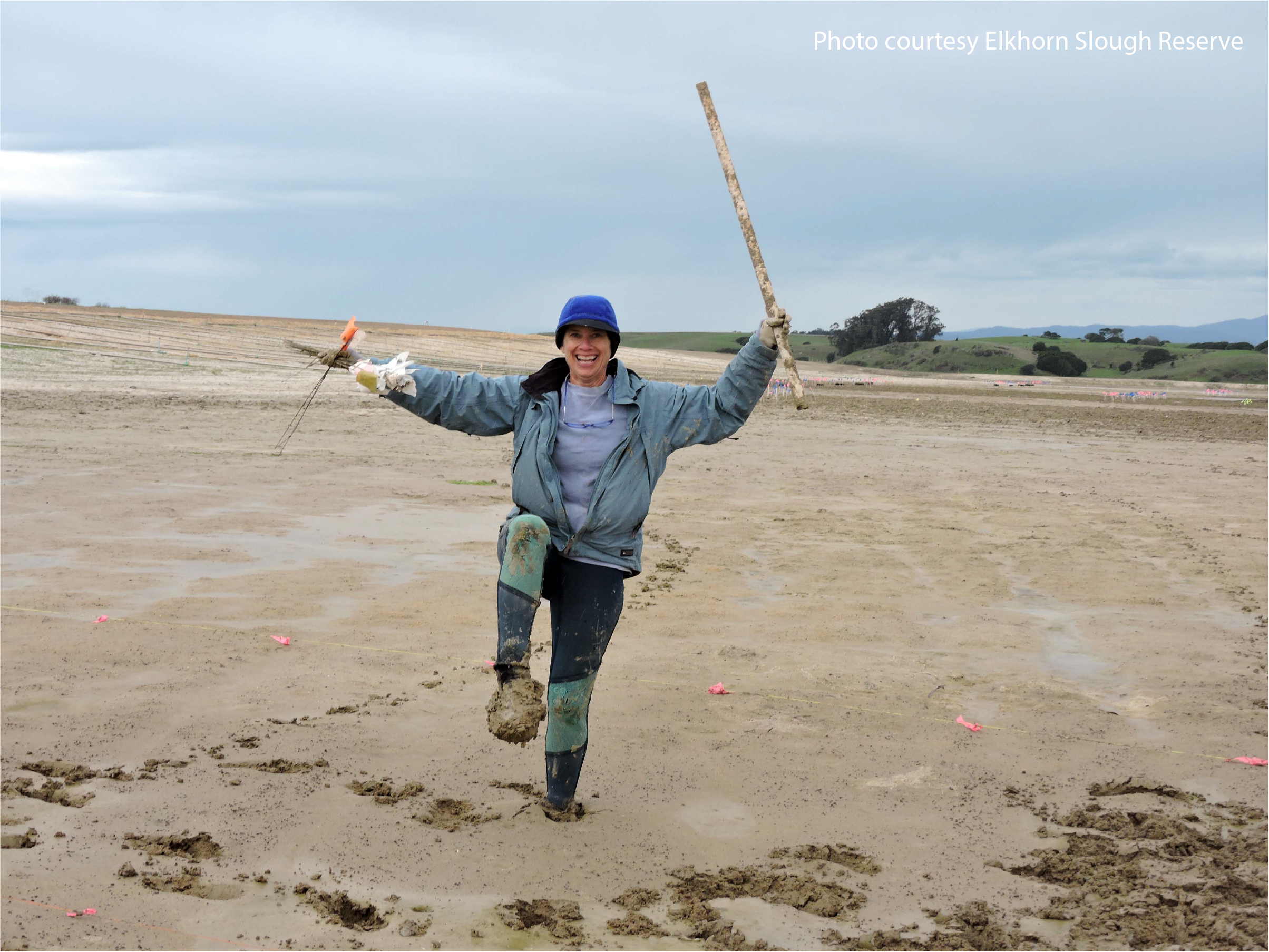 Celebrating finishing planting at Hester Marsh at the end of a muddy day, Karate Kid style.

Nik: What else is going on at Elkhorn Slough? We’ve gotten 20 minutes into this and you haven’t said the word “otter” once, which makes me happy.

Kerstin: What do you have against otters, and how long has this issue been troubling you?

Nik: I went to school in California and I dated a girl who really liked otters and that was the beginning of the end of our relationship. And I can’t stand that some Reserves have such charismatic megafauna that they could live on the proceeds of otter stuffed animals for the rest of their existence.

Nik: Is that a colonial organism?

Kerstin: Yeah, and that’s a lot weirder than dolphins.

Nik: It sounds pretty slimy. So you’re a zoologist by training?

Nik: So what are you doing, plugging plants into a marsh? That’s botany!

Kerstin: They’re modular! The pickleweed I work with reproduces clonally, so there are some commonalities there. The invertebrates I was working on, Phylum Kamptozoa, don’t look that different from a pickleweed plant.

Nik: I’m getting more into the colonial and slimy. I learned about Bowiebranchia in an interview a couple months ago and that was one of the highlights of my year.

Kerstin: I’m drawn to slimy things. But I’ve come around to the fact that it’s hard to get our community to fall in love with mudflats and marshes. Otters are such a great flagship for why they should care.

Nik: They’re wonderful and adorable, and I don’t want to hear any more about them. Let’s move to ecosystem services and their valuation: Why do we have to put a dollar figure on everything?

Kerstin: I understand having that as a tool in our conservation toolbox when we’re working with partners, private landowners, and businesses who don’t necessarily care about protecting our wetlands.

I recognize the value of the tool, but if we already own the land and we have communities who can afford to love music or art for its own sake, those same people can afford to love nature for its own sake. I think we can, with no embarrassment, love our marshes and our oysters for their own sake, not for what they do for us. And isn’t the whole framework of, “what can nature do for humans”, what got us into trouble in the first place?

Nik: If you could put a dollar figure on otters, where would it land?

Kerstin: I have no idea. You’re making a face. Did you actually want me to say something more about otters?

Kerstin: I grew up in LA, but my parents both grew up in villages—in Arkansas and Northern Germany. My happiest times were wading the creek in Arkansas and walking in the woods in Germany, so I decided I wanted to live and work with nature.

I would see the park rangers and be like, “Oh you get paid to live on a nature reserve in beautiful places? That’s what I want to do.” But I was also this nerdy intellectual that liked books and writing. Conservation scientist melds those two for me.

Nik: And you never deviated from that course?

Kerstin: It was completely indirect, but it’s a long story. I was a professor at Humboldt State University, and I met my husband when he was a new professor here. I don’t know if you know California geography but that’s like 400 miles apart. Not so good for a marriage.

Kerstin: Yes, that’s where I’m zooming from, I live on the UCSC campus. So there I was, 22 years ago, in the market for a Monterey Bay area job and didn’t know a darn thing about estuaries.

Nik: We’ll strike that from the interview. 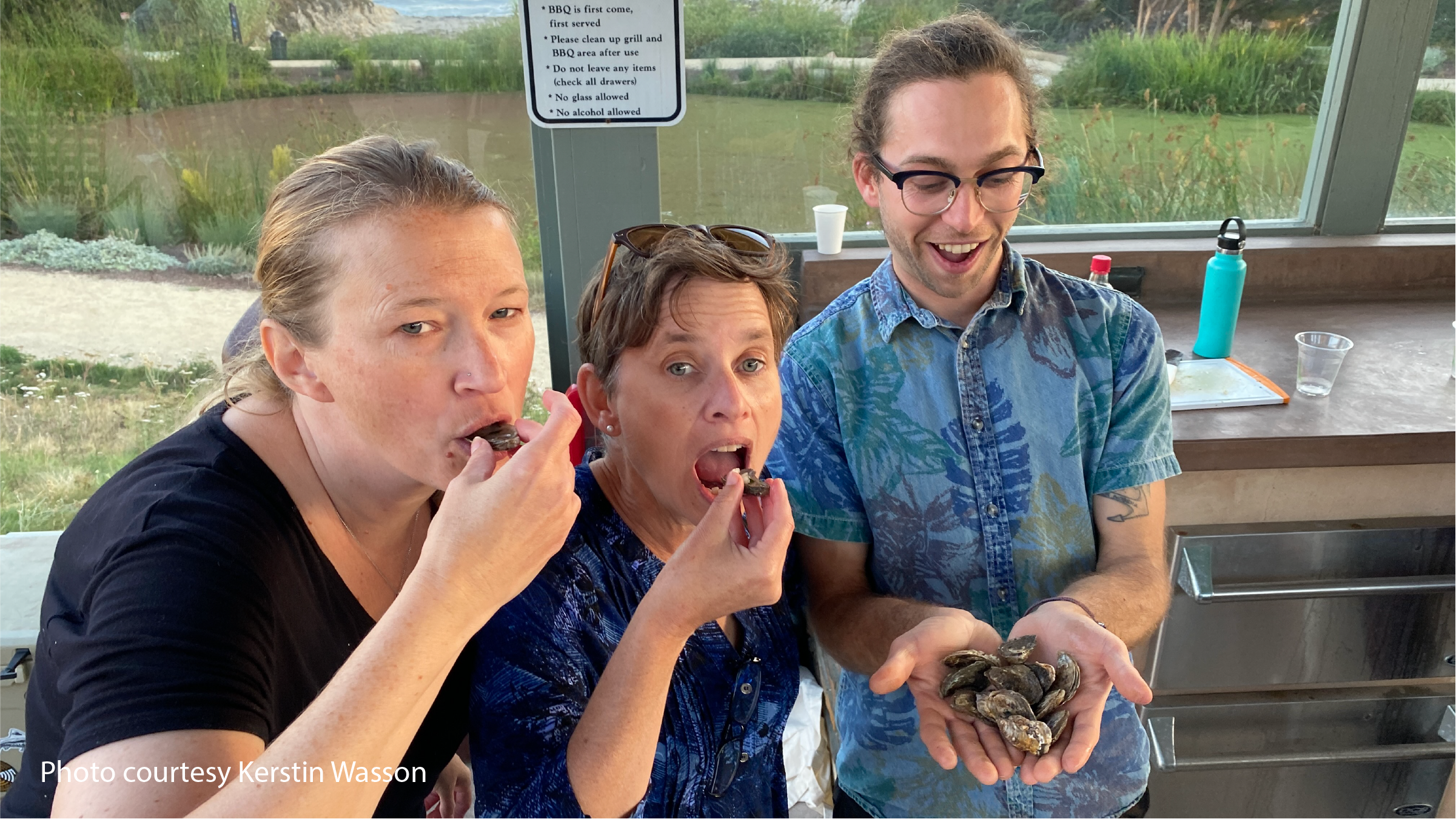 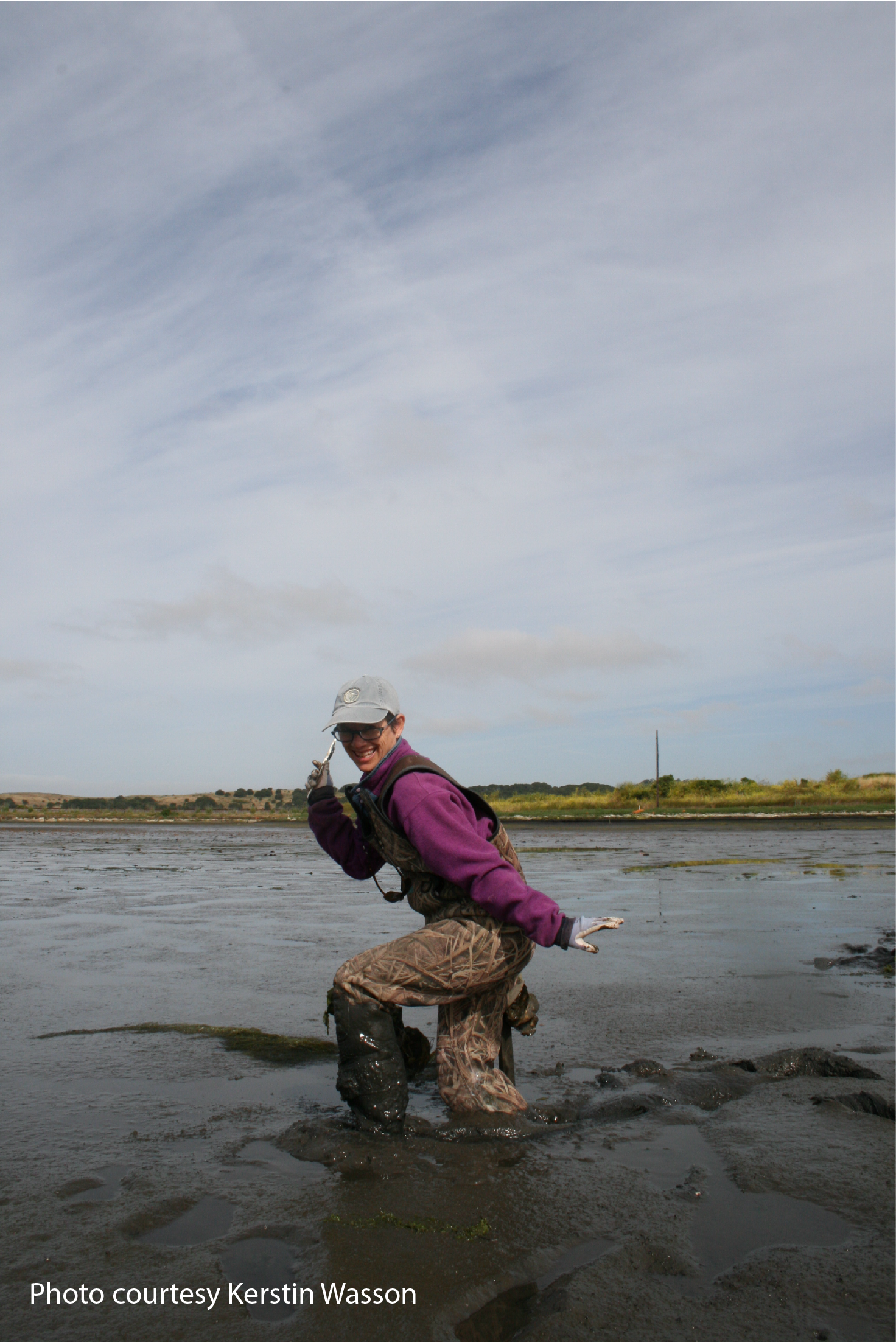 Slogging through the mud excited to go use calipers to measure aquaculture-raised Olympia oysters.