Talk NERRdy to Me: Kyle Derby 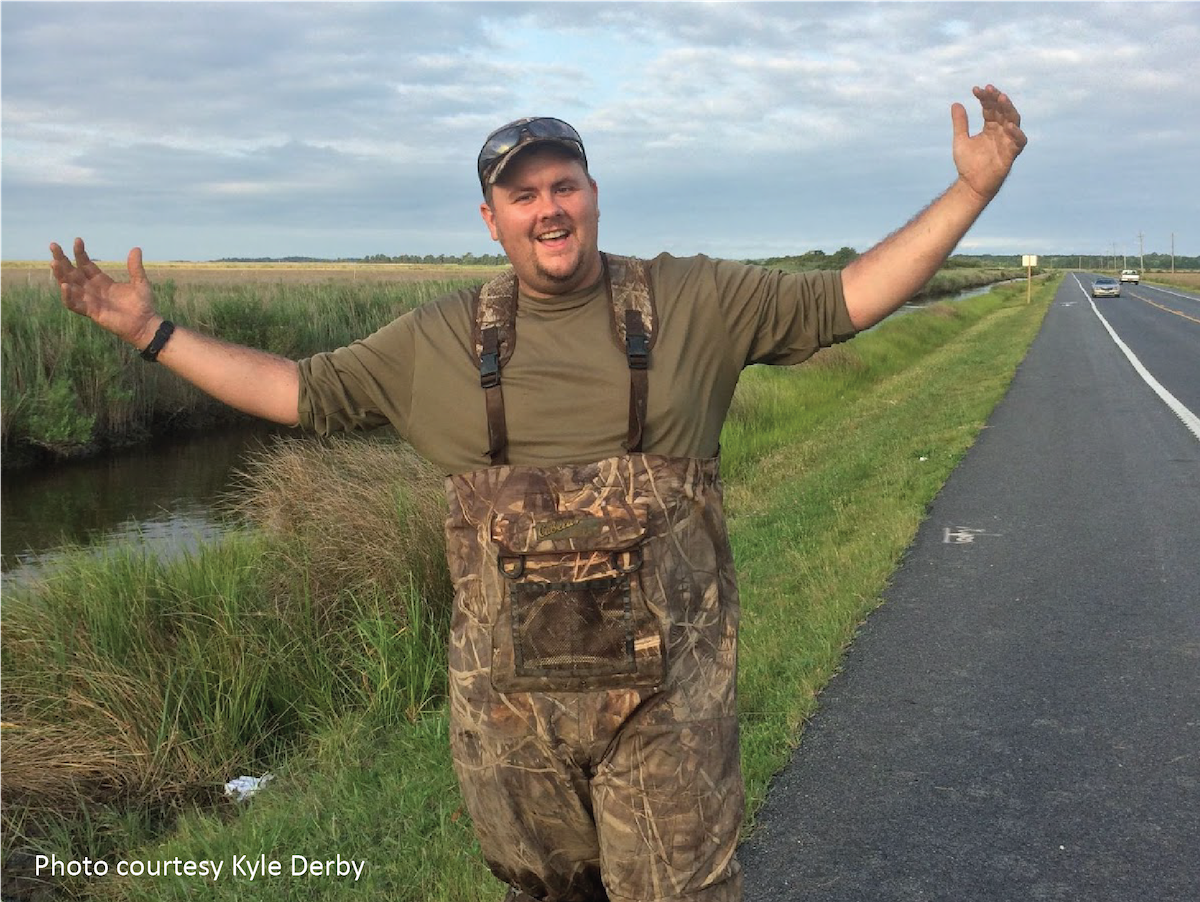 Talk NERRdy to Me is a monthly column about leaders and luminaries from across our Reserves. This month, NERRA’s roving reporter Nik Charov spoke with Kyle Derby, Research Coordinator at the Chesapeake Bay Reserve in Maryland. They talked duck seasoning and tea bags, selfies and SETs, and how field work is where the real work is.

Nik: Thank god, this is our final Talk NERRdy of 2022. Happy holidays to you, Kyle!

Kyle: Thank you Nik, I’m glad to be here.

Nik: That’s not what you were just saying, before we started recording. I’ve got to ask you one question right off: officially you’re R. Kyle Derby. Is that like L. Ron Hubbard?

Kyle: I don’t have a legion of followers yet, although I am getting up there. Yes, I am R. Kyle Derby. The ‘R’ stands for Robert, which was my father’s, grandfather’s, and great-grandfather’s name. I go by R. Kyle because when you have the same primary care physician as your father and they pull the wrong file, things get very interesting very quickly.

Nik: Ahem. I was hoping it just stood for Research. You are the research coordinator at the lesser Chesapeake Bay Reserve. The one without an entire institute of marine sciences.

Kyle: I would NOT say that we’re lesser. Small but mighty.

Kyle: That would be a question for Willy Reay.

Nik: Didn’t he retire? But CBNERR-Maryland is multi-component, isn’t it?

Kyle: Yes, the Reserve has three components. Otter Point Creek, is north of Baltimore and a tidal freshwater embayment off of the main stem of the Chesapeake Bay. The second is Jug Bay, along the Patuxent River in Anne Arundel and Prince George counties. It’s a tidal freshwater riverine system. And then our third component is Monie Bay, which is on the lower Eastern Shore in Somerset County. Monie Bay is the original component, designated in 1985.

Nik: As a representative from a single-component reserve, I always ask: why do you get to have more parts?

Kyle: When the Reserve in Maryland was first being designated, they talked about having TWELVE.

Nik: Do you have a favorite of the current three?

Kyle: If you told me if I could only work in one for the rest of time, I would probably choose Monie Bay. It’s a tidal brackish system analogous to the systems that we have on the Lower Eastern Shore of Maryland. It’s the type of wetland that I grew up in personally and professionally. It’s a special place. It’s quiet, it’s expansive, and it can take your breath away. Monie is larger than the other two components combined. It’s also managed directly by the Department of Natural Resources, so it’s much more of our staff’s responsibility. It’s the most remote with the least on-site amenities, so we take pride in what we’re able to accomplish out there despite the challenges.

Nik: What do you accomplish out there, besides taking selfies? 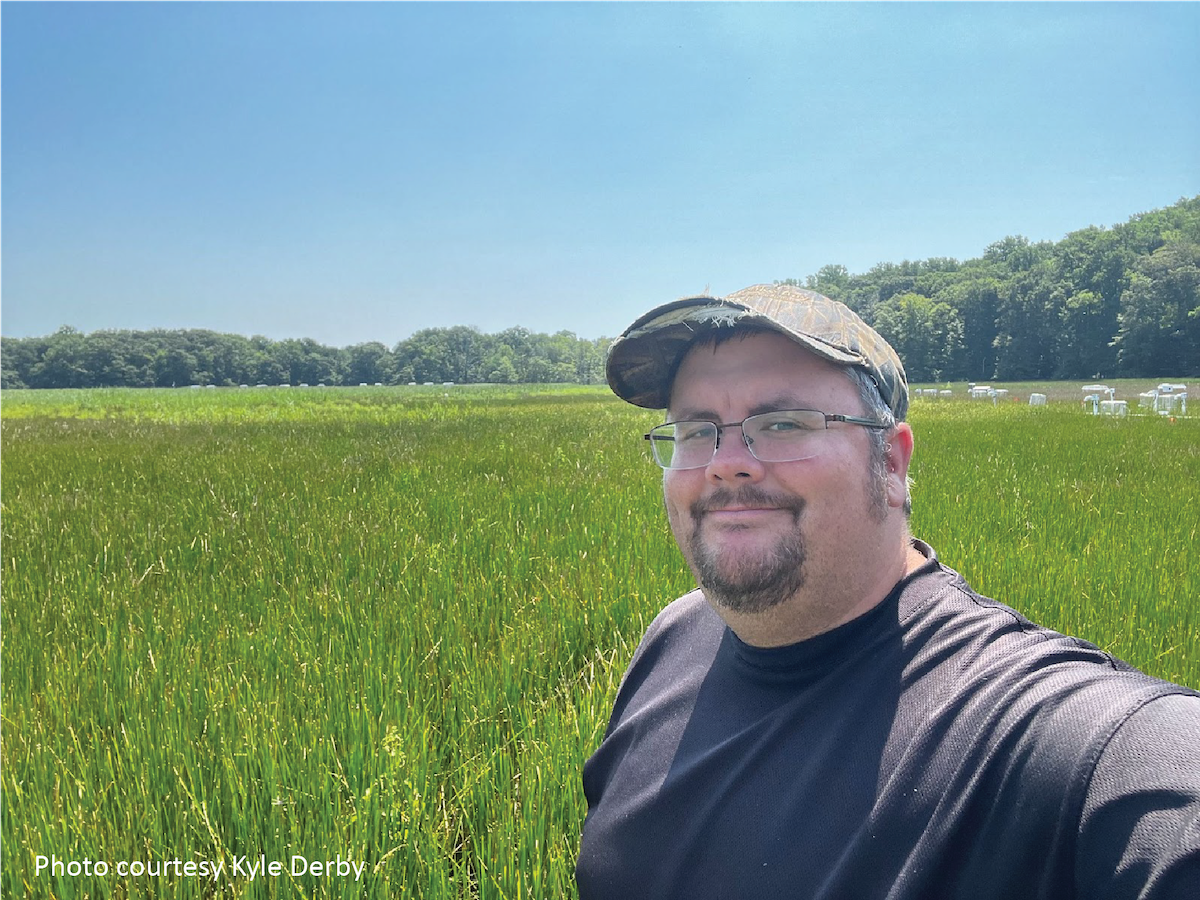 Kyle: Sometimes I take landscapes, including my award-winning NOAA National Estuaries Week photo from the photo contest, which NOAA actually posted upside down by accident. I only noticed when they sent out the congratulations. The photo is a reflection, but it’s so perfect they posted it with the water on top.

Nik: Honest mistake. *sips coffee* Do you sunburn easily, Kyle Derby? You seem to be covered up a lot in the field. 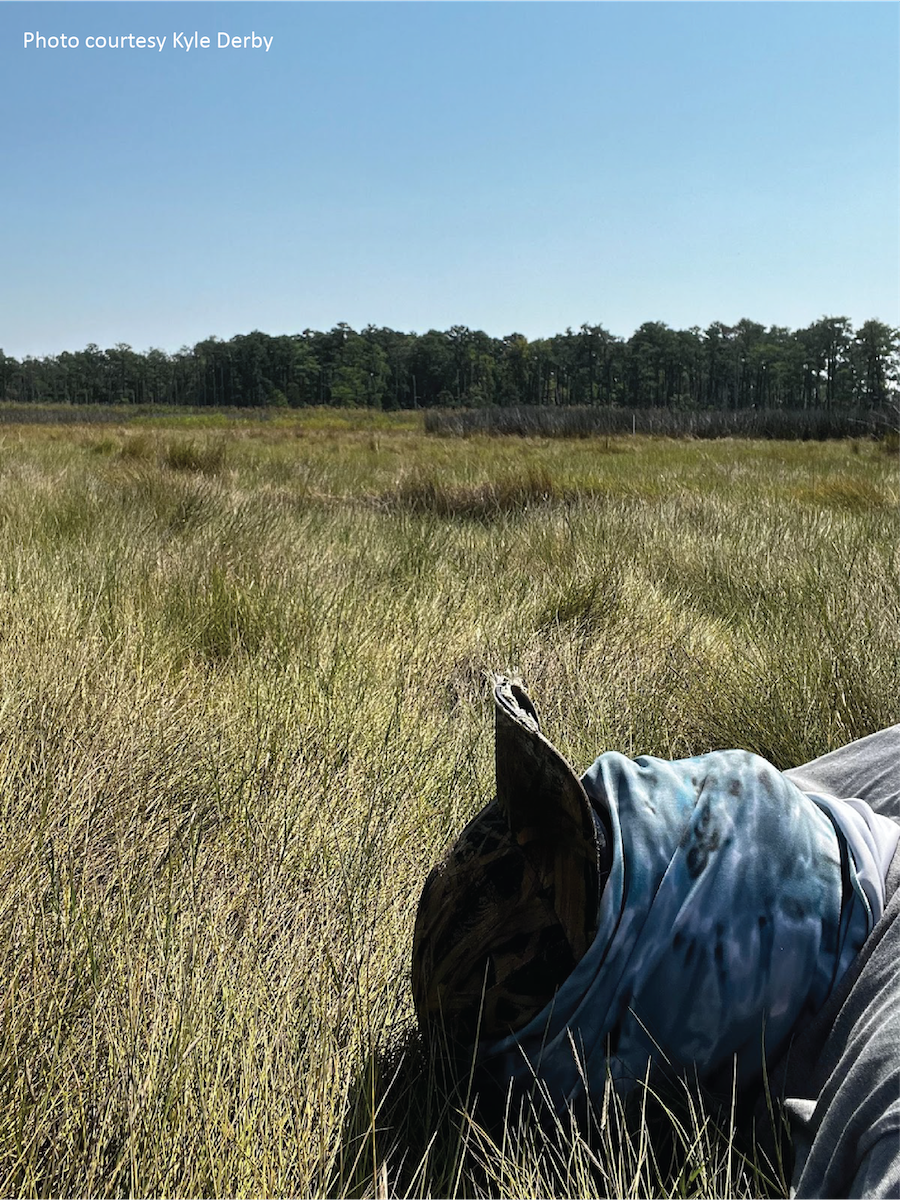 Kyle: There’s not a lot of cover out on the boat.

Kyle: You are the definition of an inside cat.

Nik: Meow. You’re a very hands-on research coordinator. You do the engineering, the SET installations, you write papers … where do you find the time?!

Kyle: Our Reserve research and stewardship staff is very limited. It’s really just three people, plus anybody we can convince to come out. Being hands-on is just the nature of our Reserve.

Nik: Have you always done this sort of thing?

Kyle: Growing up, I did a lot of hunting and fishing on the Chesapeake Bay and Delaware Bay with my family. We’re historically from Delaware and we would go over there to go hunting and fishing. As I grew up I thought, “maybe I can find a way to work in these places I spent so much time in.

Nik: Do you think working scientifically in the marshes that you grew up hunting on makes you a better outdoors person?

Kyle: It’s the other way around. Growing up fishing and hunting gave me a better understanding of why that environment is so important, especially to the people that live in it every day. It gives you a different perspective than just going out there for research, which helps me with my communication of what the Reserve does and why it’s important. I think we should do more of that across the System. And by the System, I don’t mean just the NERRS, but coastal science in general. My waders are camouflage, I wear a camouflage hat. When there’s a big group of us, I’m the one that tends to be approached because I’m the one that looks the most like someone who spends a lot of time out there.

Nik: You do, although your beard might be a little too short for a duck hunter, based on what I’ve seen on TV.

Kyle: <sigh> As I was saying, I always thought: these places are so beautiful, could I have a job in them? I got my degree in Environmental Restoration and Management at the University of Maryland. While I was there, I had an internship with the U.S. Geological Survey at the Patuxent Research Refuge in Maryland. During that internship I got to travel up and down the East Coast installing surface elevation tables (SETs) and meeting a bunch of people. After I graduated, I worked for an engineering firm here in Maryland as an environmental scientist doing things like endangered species assessments and water quality monitoring for construction projects. I did that for a little while and then moved on. After that I did environmental restoration projects, which were difficult and fulfilling and taught me a lot. Then I got a phone call from my old bosses at the USGS saying that a position had opened up. I ended up working with the USGS at Patuxent for 4 ½ years. I worked in almost every coastal state, but not Alaska and Hawai’i (yet), as well as some coastal provinces in Canada in the Maritimes. I made a lot of good friends and installed a lot of SETs.

Kyle: I wouldn’t be surprised. But I went back to school because I realized it was the only way for me to really move forward in my career. I went back to the University of Maryland for a master’s in wetland science. My project looked at methane emissions in tidal brackish marshes directly adjacent to the Monie Bay component of the Maryland Reserve, which is where I met the staff I work with now. After I finished grad school, the position here opened up.

Nik: Just kind of osmosis’ed your way in there. 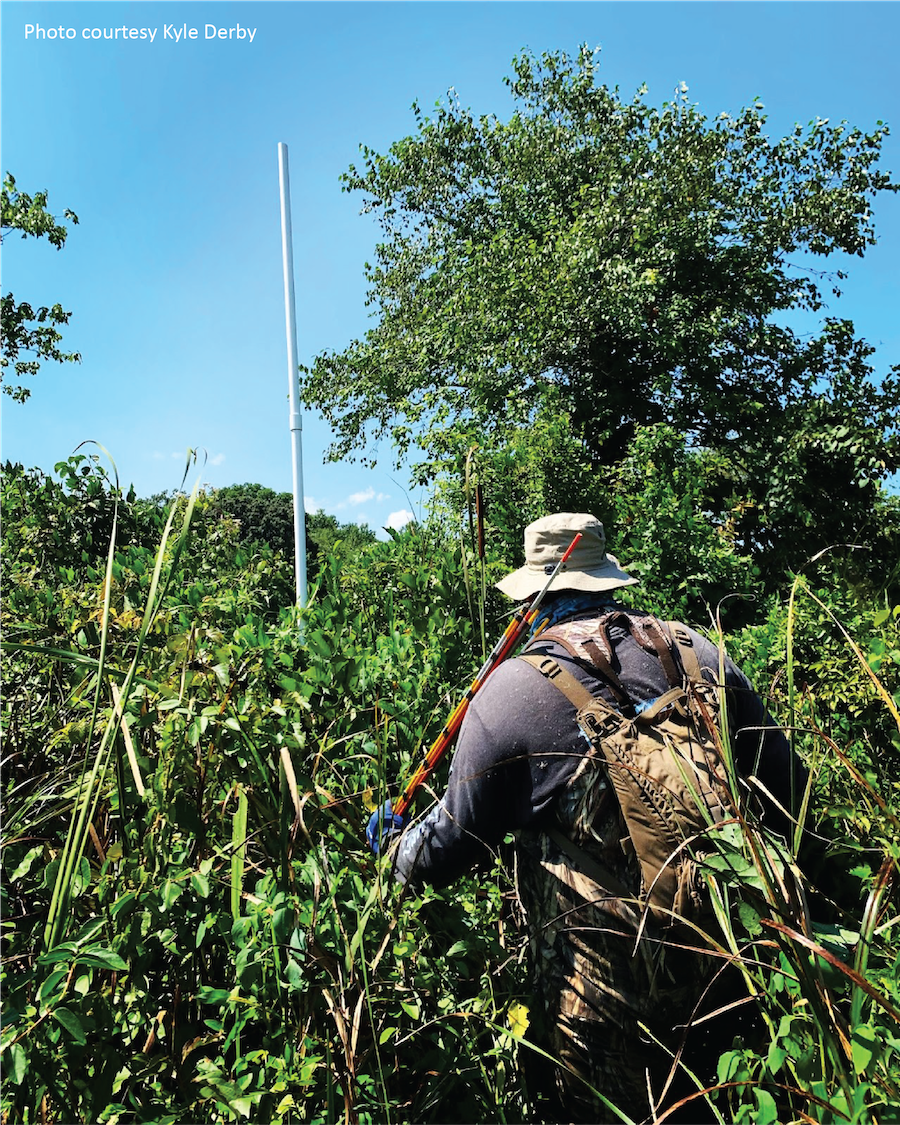 Nik: All I know about Maryland is Baltimore, crabs, and The Wire. Turns out, the Chesapeake Bay is the largest estuary in the country. Based on your local knowledge: how is the Chesapeake Bay doing? And when you have so many organizations involved in one geography, how do you all coordinate?

Kyle: The Chesapeake Bay research community is a very big pond. There are lots of fish and some of them are very big. We are not a big fish in the way that some of the other Reserves across the country are. We try to work together as best we can. A lot of big institutions focus their research in certain areas, so we are able to bring all of that together. The Bay faces a lot of challenges. The Chesapeake Bay Program has been restoring it for decades. The watershed issues are not just Maryland-based, they comprise six states as far north as the head of the Susquehanna River in Cooperstown, New York.

Kyle: Pollution from hundreds of miles away at Otsego Lake will flow by Otter Point Creek and Monie Bay on its way south. And then there are localized issues as well. Bringing people together for the health of a resource that they may never see in their life can be a big challenge, along with powerful storms and land subsidence in the Chesapeake Bay.

Nik: I just read that Hog Island piece in the Washington Post on sea level rise.

Kyle: It’s on my ever increasing list of things to read.

Nik: But things are still edible down there, e.g. blue crabs. Even though they are coming to Maine now.

Kyle: I’ll come up there and show you guys how to do things. I’m actually a little miffed that you haven’t asked for blue crab help yet. But there are always going to be issues. Certain things are improving and certain things are not. The Bay when I was a kid is different from the Bay now. 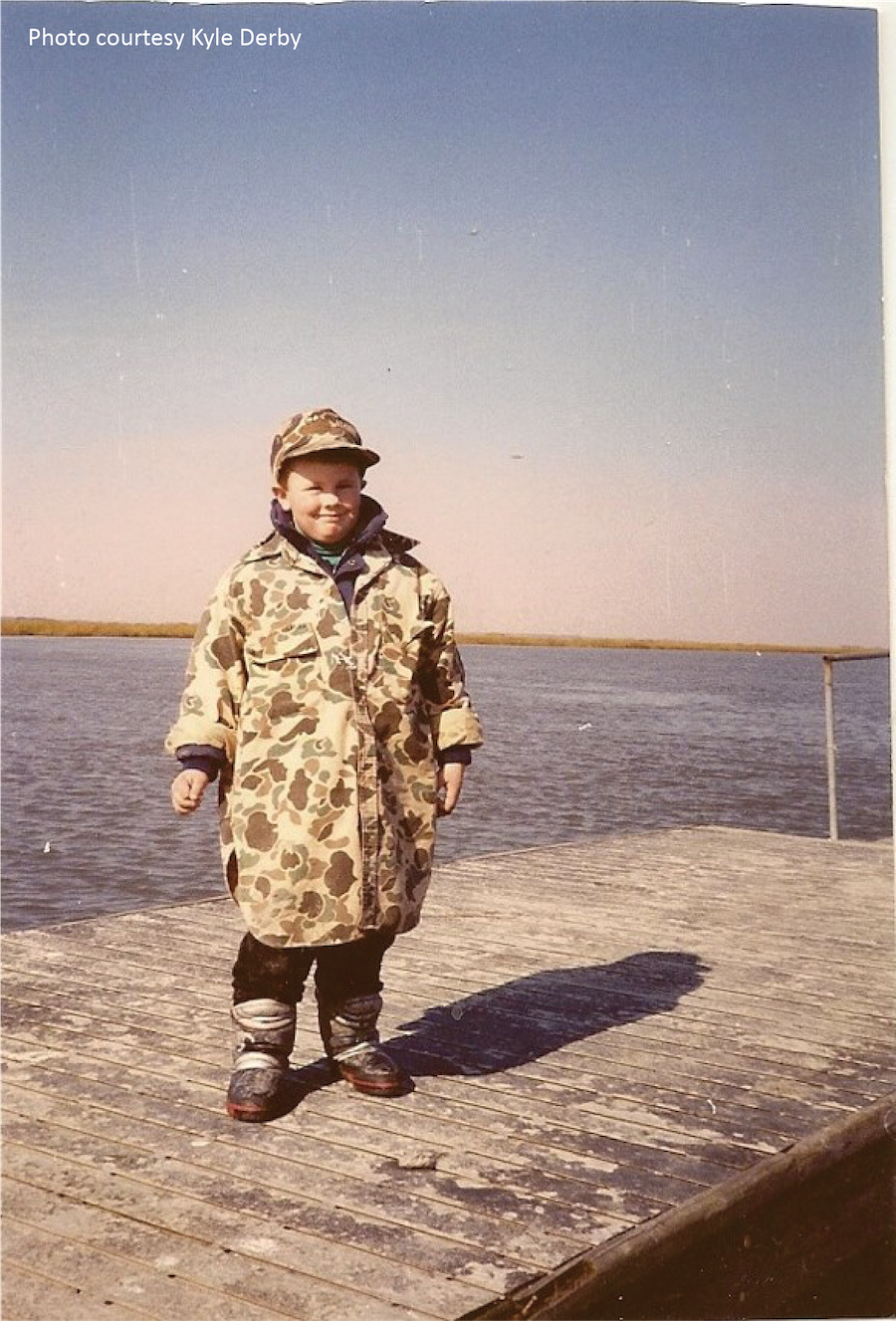 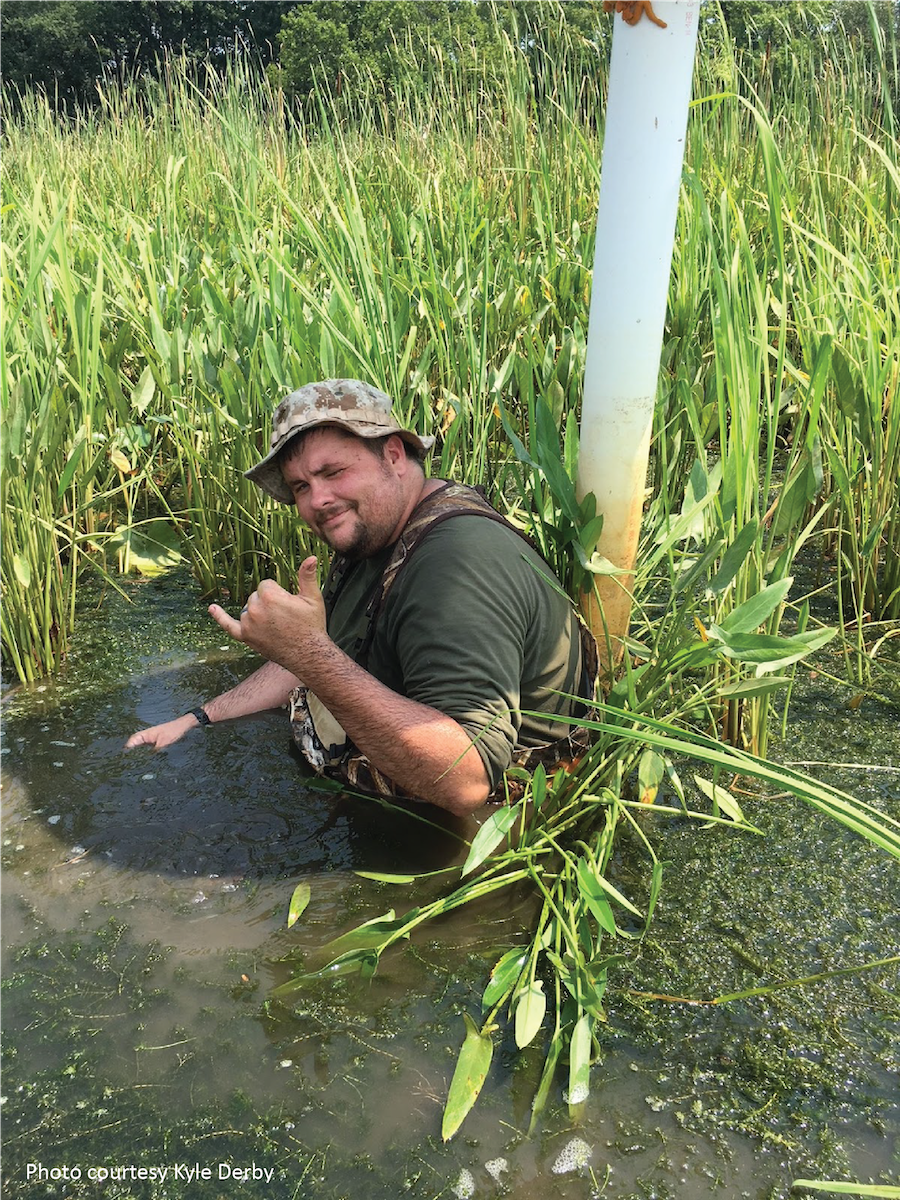 Nik: At least you’ve still got the Eddie Munster haircut. Moving on: what do you have against tea? I’ve heard some stories…

Kyle: Project Tea Time was a NERRS Science Collaborative project idea I worked on with the then-research coordinator at the Delaware NERR, Dr. Kari St. Laurent. She’s incredible. Better scientist than I am.

Kyle: Not many people.

Kyle: That’s not nice, he’s a better scientist too. For the project, we go out into the marsh with Lipton green and rooibos tea. We take the teabags, which have already been dried and weighed in the lab, count and label them correctly, and bury them 10 centimeters deep in the marsh. We retrieve them after 90 days, knock the big hunks of mud off, dry them, cut the bags open, and weigh the tea inside to see what’s left. Tea bags are standardized because every cup of tea needs to be the same, so we can plug the numbers into a formula and get a proxy measure of below-ground carbon decomposition in a wetland.

Nik: I thought it was just a good way to make terrible tea.

Kyle: It’s actually an important metric. We know that wetlands store carbon, so if you know how fast the carbon is going away …

Nik: Wait, where is the tea carbon going?

Kyle: Into the air. It’s being consumed by bacteria.

Nik: Does it come out as methane, or carbon dioxide, or both?

Nik: C’mon, there’s no carbon in hydrogen sulfide. So the carbon stays in the bacteria then?

Kyle: I didn’t know we were going to dive into biogeochemistry, but we can do that if you want.

Kyle: The tea bag method is one of the easier, more reproducible methods of measuring decomposition. There is another way to do it where you bury pieces of unwashed cotton or canvas.

Nik: Because otherwise, you’d have control for what kind of laundry detergent they’ve been in? Wait – how is Tide not a NERRA sponsor? And speaking of corporate tie-ins: are you looking forward to the Avatar sequel?

Kyle: I never saw the first one, so I could care less. There are enough problems here with our estuaries on Earth, we don’t need James Cameron’s fever dream estuaries on a faraway futuristic planet.

Nik: <sigh> There goes another sponsor.